We’ll send you a myFT Daily Digest email rounding up the latest Entrepreneurship news every morning.

It used to be so simple: business schools could tailor courses to traditional career paths, such as banking, investment and consulting, and equip alumni with the knowhow to accelerate up the corporate ladder and maximise their salaries. The better the alumni performed, the better the schools performed in MBA rankings, and the more candidates vied for a place.

But the equation has changed. Business schools are shaping a generation of leaders in a world that needs sustainable growth amid a climate crisis and insistent calls for social justice. Managers are expected to address environmental, social and governance (ESG) issues; entrepreneurs want to make profits with a purpose.

Curricula have shifted accordingly. They now include ESG electives, for example, and more entrepreneur-specific courses. Many business schools also connect students with entrepreneurial networks, host inspirational talks or have established incubators to help get ideas off the ground.

The “alumni change makers” award highlights arguably the most important product of these efforts: the graduates whose task it will be to create and shape tomorrow’s sustainable businesses. It celebrates alumni who are tackling society’s challenges head on, whether in health, conservation or manufacturing.

Among them is George Boghos, who is in no doubt that business school was critical to launching his company. “But for the resources, I probably would not have pursued this path,” he says. “I probably would have gone back to a traditional finance role.”

Boghos graduated with an MBA from Chicago Booth in 2018 and co-founded Autism in Motion (AIM) Clinics while studying. The company provides behavioural therapy for children with autism and focuses on underserved rural populations, particularly in the southeastern states of the US. As well as providing clinics, the company has created a fellowship programme to help train the next generation of clinicians.

Before the MBA, Boghos worked in investment banking and private equity, both with a healthcare focus. He took the course with “the idea of exploring the entrepreneurship paths, specifically focused on this area within healthcare”, he says, and picked Chicago Booth because of its support for entrepreneurship and social impact. It is home to the Rustandy Center for Social Sector Innovation, which runs an incubator that Boghos went through.

“That really helped me frame out what the idea and strategy is — it connected me with resources,” he says. “It really helped me crystallise how this is a mission-driven organisation and how we track and measure the impact we’re making.”

Not all entrepreneurs go to business school with an idea in mind. Johanna Baare had spent six years working at a start-up consultancy before starting the Global MBA at Madrid’s IE Business School in 2018. As she progressed through the programme, she realised that she was interested in building an organisation.

For her thesis, she worked with a group of fellow students to craft the business plan for a potential start-up and felt that one question always hung in the air: who is actually going to make this happen? “I always said, ‘Well, I would love to do that, but I don’t have the idea’,” she says.

After she graduated, Baare joined a German incubator and began mentoring Anne Lamp, who had invented a sustainable alternative to plastic. The two worked well together and realised that their technical and business backgrounds were complementary so, in September 2020, they co-founded Traceless Materials to bring the product to market.

As the business lead in a small start-up, Baare undertakes tasks ranging from finance to legal work and hiring. The MBA stands her in good stead for this, she says, as it has introduced her to a broad range of business concepts so she knows where to find information and what questions to ask advisers. “You get the overview, the understanding of how the things are related [in a business],” she explains.

Such insights and perspectives were what Elisa Dierickx was looking for when she enrolled on an MBA at Insead. In 2011, after her undergraduate studies in organismic and evolutionary biology at Harvard, Dierickx moved to Cape Verde to co-found a nature conservation non-governmental organisation (NGO) on the island of Maio. Its programmes include preventing turtle poaching and developing a marine protected area.

Over a decade, Dierickx built Fundação Maio Biodiversidade (FMB), alongside pursuing other professional avenues, including a PhD in zoology from the University of Cambridge. But “conservation is really an interdisciplinary field”, she says, and she realised that to have a larger impact she needed to bridge the worlds of “nature lovers” — NGOs and academia — and business. “As a first step, I thought the MBA would be perfect . . . It is good to learn that language, learn the other perspective and learn some of their tools,” Dierickx says.

Already, FMB is putting the new perspectives from business school to good use. Dierickx worked with two professors to write cases featuring FMB — one on organisational behaviour and another on strategy. The latter was used in Insead’s Master Strategist Day, part of the strategy course, where students, in collaboration with mentors from Bain, the consultancy, present recommendations on companies’ dilemmas.

“It is a huge wealth of information . . . for us to explore,” says Dierickx. Some of it is already having an effect: as part of the exercise, FMB asked students how it should approach a tourist resort being planned for Maio: should the NGO fight it, ignore it or work with developers? The different perspectives, bringing in interdisciplinary views, “shifted some of our teammates’ opinions at FMB”, notes Dierickx.

Social and environmental impact is not the sole preserve of start-ups and NGOs. Highly commended change maker Chaoxing David Fu made his mark at an established Chinese energy business after completing an MBA at China Europe International Business School (Ceibs) in Shanghai.

Fu had left China at the age of 12 and gone on to pursue a career in Silicon Valley. But, in 2015, as he flew to northern China for a friend’s wedding, he looked out of the aeroplane as it landed and saw a blanket of smog. It was, he says, a turning point: “I said to myself, ‘Enough is enough. I want to make a change. I want to make an impact.’ That’s why I chose to come back to China.”

Ceibs appealed to him because of the insights it could offer into China’s business culture, along with opportunities to build a network. “A lot of the things we learn in the west, like the techniques or marketing terms or methods back in the US, are not applicable in China,” Fu says. “So we learnt the same skill set with Chinese characteristics. That’s a big part of what Ceibs offered.”

In 2020, Fu became a full-time executive board member at the Gujiao Guosheng Coalbed Methane Company in Shanxi province. His work includes forming a strategic partnership with the local government to increase public use of natural gas for heating and cooking instead of coal. He is also trying to stabilise the supply of liquefied natural gas (LNG) so that the local transport network can invest in LNG lorry fleets, rather than diesel. The next step is building storage units for LNG to minimise gas flaring.

Nearly seven years on from his smoggy epiphany, Fu is proud of what he has achieved. “Every time you see the blue sky, you feel that is something you did,” he says.

A chance to change

It is a sentiment that may strike a chord with Gaetano Lapenta. In his graduation speech from the executive MBA at Italy’s Politecnico di Milano School of Management in 2019, he focused on one message: that the cohort had been given a chance to make a success of something they were passionate about.

Before taking the course, Lapenta was head of innovation at construction company Focchi Group but felt restless — he is, he says, a person who needs “fire”. He is now co-founder and chief executive of Fybra, a start-up specialising in indoor air quality. Its smart sensors indicate precisely when more ventilation is needed in offices and classrooms, maximising both air quality and energy efficiency. The algorithm it uses can also be adjusted to minimise transmission of airborne diseases such as Covid-19.

The idea came to Lapenta during his time at Politecnico di Milano, and he applied for a patent in January 2020. Some 18 months later, he quit Focchi to go it alone, setting Fybra up with co-founder Marco Scaramelli.

Lapenta says he pursued an EMBA because he “felt this passion that was burning, but . . . did not have the tools to deliver it in reality”. Now, however, his aspiration has become a real business. “The good match between passion and reality came with the hard skills of the MBA,” he says.

Inspiring though such projects are, some alumni feel that business schools have more to do when it comes to teaching ESG. Shortlistee Harry Hely-Hutchinson, for example, a recent Iese graduate, says that while he would not have started his business without the MBA, there is room for improvement. He feels there is “still a strong focus on the traditional career paths, like consulting and finance, because that is what is good for the rankings” — at the expense of start-ups and entrepreneurship.

Similarly, fellow shortlistee Giorgia Granata, who completed a London Business School MBA in 2018, credits the course with many advantages, such as valuable knowledge and a strong network. But she adds that sustainability was still treated as a “fringe topic”, when it should have been integrated into the core curriculum — it is, she says, simply too important to be optional.

Winners and judges are listed below; the full shortlist is available here. 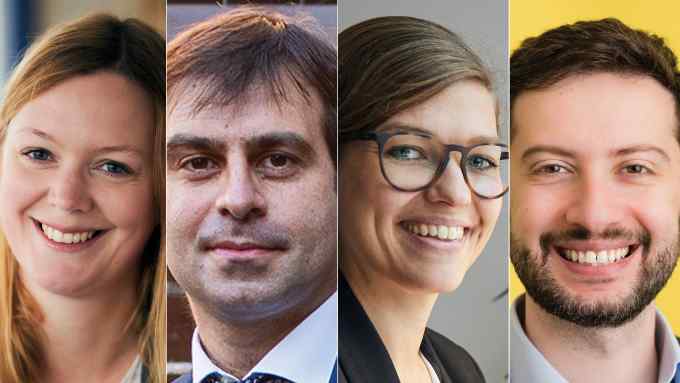