Richard Milne in Oslo and Emma Agyemang in Copenhagen

An unfancied Danish team overcomes adversity and captures hearts on the way to European football glory.

It happened in 1992 when Denmark unexpectedly won the European Football Championship despite only being drafted into the tournament at the last minute. Twenty-nine years later, after the trauma of seeing their star player Christian Eriksen suffer a cardiac arrest in the opening game, could it happen again for the Scandinavian nation?

“What happened with Eriksen will become part of our national narrative. In Denmark, everybody is talking about this being another ’92,” said Lykke Friis, a former government minister who was on her way to Baku in Azerbaijan to watch Saturday’s quarter-final against the Czech Republic. “That fairytale summer is on everybody’s minds.”

The image of Denmark’s players surrounding the prone Eriksen as he received electric shocks and CPR on the pitch in Copenhagen will be one of the defining moments of Euro 2020. Friis called it a “galvanising event”, something that caused a nation as well as neutral supporters to fall in love with the team.

Pierre-Emile Hojbjerg, the Danish midfielder, described the tournament as “a rollercoaster”. When they returned to the field against Finland after Eriksen collapsed “we played with our hearts and tried to do everything to make ourselves and the country proud”, he said.

The 1992 victory remains the high-water mark for Danish football. The team had failed to qualify but were called up barely a week before the tournament kicked off to replace Yugoslavia, who were excluded due to the Balkans war. Denmark went on to beat Germany in the final, an event that Friis called “a Hans Christian Andersen adventure” for the nation of 5.8m people.

Nikoline, a bartender at the Hop House in Copenhagen, was just two when Denmark won, and said her parents would often tell her she would never know how great a feeling that was. “Now it could happen,” she said, describing the current atmosphere as a “national party”.

After Eriksen’s near-death experience (he is now recovering) nobody had any expectations for the team, she said: “People felt like if they go out it’s fine, as long as everybody lives.”

But since the initial loss to Finland the team’s performances have got better and better. They shocked Belgium by scoring first, before eventually losing to one of the favourites for the title.

The final group match against Russia was tense, before Denmark found their gear to seal an emphatic 4-1 victory. They also scored four without reply against Wales to reach the quarter-finals. “You can really feel the patriotism building,” said Nikoline.

A group of three men in the Copenhagen bar — watching neighbours Sweden crash out of the competition this week — showed how Denmark’s success has snowballed. Frederik, a 31-year-old sports journalist, is such a fan he has already bought a semi-final ticket due to his belief that “this team are the real deal”. He has urged friends to buy replica Danish football shirts for months.

Soren, a 31-year-old engineering student, said the matches had helped him and others feel pride in the red-and-white Danish flag after years of watching it be co-opted by the nationalist right. Drinking companion Anders, a 32-year-old IT worker, wished he had listened to Frederik and bought a shirt, now sold out in most shops.

The sense of “unity” after Eriksen’s heart scare and the “intense” feeling that Denmark could go all the way again have drawn him in. Frederik chipped in: “You don’t see a team that wants it as much and fights for it as hard as we do.”

Hojbjerg stresses that Denmark “have not done anything yet” and still have to beat the Czechs and either England or Ukraine to reach the final.

But he conceded there were similarities between today’s team and the one in 1992. Both have a Schmeichel in goal — father Peter 29 years ago, his son Kasper today — as well as solid defenders and exciting attackers such as Brian Laudrup in 1992 and Mikkel Damsgaard now.

Hojbjerg added: “There’s [also] togetherness, values of ‘one for all and all for one’, this pride of playing for your country.”

The Czechs are likely to prove tougher opponents than Wales, and have one of the tournament’s in-form strikers in Patrick Schick. And after three games in Copenhagen, and one in Amsterdam that appeared to be an honorary part of Denmark for the match due to a preponderance of Danish fans, the atmosphere is likely to be different in Azerbaijan.

Still, the intense feeling of unity in both team and country leads many Danes to be optimistic. Hojbjerg himself described the “extraordinary” feelings of the past few weeks, especially coming after more than a year of living with Covid-19 lockdowns and empty stadiums.

“Really being able to feel the love, it reminds us all why we started playing football in terms of joy and the passion,” he said. “Football has to be enjoyed together — you have to feel it. This is what’s been happening here in Denmark.” 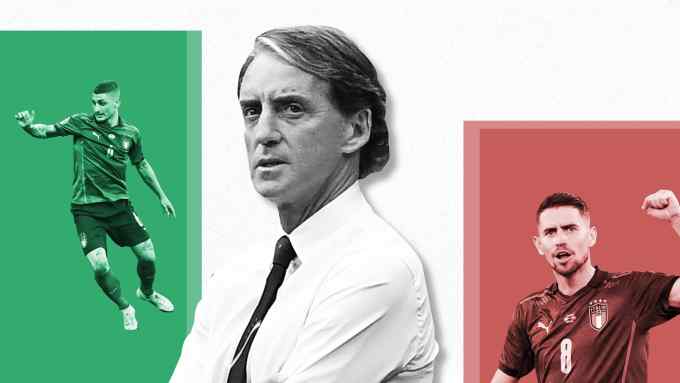