Pocket watches are back in fashion

When actor Emma Corrin dressed up as Evander Berry Wall, the socialite dandy of New York’s Gilded Age, for this year’s Met Gala, the vital finishing touch to their black suit, top hat and check jacket was a vintage 1914 platinum and onyx Cartier pocket watch. It was tucked nonchalantly into Corrin’s waistcoat, a subtle nod to the emerging trend across men’s and women’s jewellery for wearing watches on chains.

The pendant watch, redolent of swinging, rule-breaking informality, made a revamped appearance at Watches and Wonders earlier this year. Dior Jewellery creative director Victoire de Castellane added medallion watch necklaces to her Gem Dior collection, taking the form of single misshapen shards; one rose-gold version had touches of carnelian and pale pink aragonite, while another in yellow gold had a malachite dial. Hermès included a leather sautoir as part of the new Kelly watch collection, inspired by the familiar 1930s Kelly handbag padlock that morphed into a watch in 1975. Now it’s suspended from the equally familiar leather cloche, in black boxcalf or smooth alligator, hung on a leather cord, suitably hard-edged and 1970s in feel.

The long and loose 1920s necklace resonates with Gabrielle Chanel’s style and story – an emblem of the liberated woman. So it’s not surprising that this year Chanel seized on the necklace watch, making it its own with three unique Mademoiselle Privé models: one medallion, on a necklace of woven onyx beads, is centred on a lustrous golden pearl encircled in black onyx; another medallion, inspired by the Coromandel screen in Mademoiselle’s Rue Cambon apartment, has an onyx dial and, on the other side, a beige-gold sculpted profile portrait of Coco herself. The third is a gold and diamond bird-cage pendant with the pavé-diamond dial on the underside.

At Cartier, the necklace watch has become a feature of high-jewellery collections. The Tourbillon Mystérieux Azuré offers up the double thrill of a rare gemstone – a heavenly Ceylon-sapphire drop of 25.93ct – paired with a recherché complication, the mysterious double tourbillon. At Harry Winston, too, the Ultimate Emerald Signature High Jewellery secret watch detaches from its satin wrist band to be worn on a chain or as a brooch.

Fuse the two – wear the pocket watch as a pendant

As for the pocket watch, a fashion-fuelled re-emergence seems likely. Antique and vintage models, either open-face or hunter-cased with a protective gold or silver cover, can be found at auction or specialist dealers such as the Watch Club or Somlo London, or from Vacheron Constantin’s vintage selection, Les Collectionneurs. Christian Selmoni, Vacheron’s heritage and style director, says: “We have noticed an increasing demand for pocket watches, both simple and complicated, such as chronographs and minute-repeaters.” Wear them on an antique Albert watch chain, authentically tucked into a waistcoat pocket, or even on a vintage-inspired gold chain with bar, as in Jessica McCormack’s latest Goth-flavoured Lost Boys collection. Or fuse the two genres and wear the pocket watch as a pendant on a long chain. This is what Jacob & Co has done with its Brilliant Watch Pendants, melding haute horlogerie with high fashion and high jewellery, mixing vintage and contemporary.

Among the heritage watchmaking maisons, pocket watches tend to be made in small quantities as true collector’s items, showcasing rarefied métiers d’art, or in Patek Philippe’s case, their Rare Handcrafts. Often too, the pocket watch is a vehicle for sophisticated complications. Harry Winston’s Quadri Tourbillon features four independent tourbillons, the openwork movement fitted into a round case. Mark Toulson, Watches of Switzerland Group’s head of watch buying, says: “Pocket watches very much represent a special occasion watch, most often worn at weddings. Our business tends to polarise into relatively low-priced watches under £1,000, likely for occasional wear, and high-priced collector’s items. We sell maybe one or two Patek Philippe pocket watches per year, driven by lack of availability as well as by price.”

In its Les Cabinotiers series, Vacheron Constantin offers the supremely elegant bespoke Grande Sonnerie Westminster, with its engraved gold case, while Hermès goes to the other extreme, subverting the essential classicism of the pocket watch with the Arceau Pocket Cheval Punk model.Adapted from Daiske Nomura’s design for a 2021 men’s silk scarf, the dial is engraved and enamelled with a flamboyant horse.

HTSI
The original tick tock — the loudest trend in watchmaking 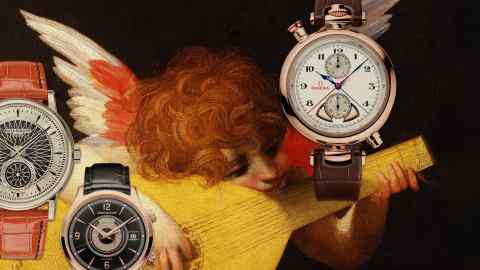 Philippe Delhotal, artistic director of Hermès Horloger, says pocket watches are embedded in Hermès’s story: “In 1912, Jacqueline Hermès created the first Hermès wristwatch by taking her father’s pocket watch and wearing it on her wrist on a specially made leather strap.” He adds that demand for pocket watches has grown in recent years, perhaps because they “represent a timepiece from a bygone period in a digital world. It makes a statement that the wearer appreciates craftsmanship and also delights in the retro aesthetic that only a pocket watch can give.”