The ethereal beauty of the garden in midwinter

Dying gracefully is a horticultural concept that should be greatly prized. A plant that evolves through its life stages and then bows out with a burst of supreme beauty is a plant to be celebrated, especially in winter when sculptural seedheads, elegant shrubs and billowing grasses all come into their own in the soft, diffused light of the darkest months of the year. An appreciation of these forms has grown over recent years as we wake up to the wabi-sabi appeal of the winter garden.

“I’m very interested in decay and how we honour plants through their whole life cycle – and indeed how we honour ourselves through our whole life cycle,” says landscape architect Marian Boswall, whose practice is rooted in creating spaces that are both enticing to wildlife and enchanting to their owners. “We need to see the beauty in ageing, to celebrate every season.” For her Kent-based studio it begins with layering of plants, which protects the soil, locks in carbon, provides habitats for overwintering animals and also creates layers of textural interest. Her favourite plants for this include Thuja occidentalis “Danica” (a low-growing spherical white cedar) and epimediums, which retain their beautiful loveheart leaves in winter. Equally important is building in structure, as the essence of shrubs and many perennials comes to the fore in winter.

Before planting anything, locate the light, adds Boswall, which in winter passes through gardens in a different trajectory, to ensure you catch it behind textural grasses or interesting forms such as the spiky red stems of Rosa omeiensis pteracantha. Get it right and you will amplify their innate beauty. Or add water, which will bring dramatic reflections and atmospheric mists. “It’s a bit like a set design,” she adds. “Which bits of the magic do you want?”

Light is everything when a garden is stripped back to its bones. After a career contemplating these tonal contrasts, photographer Andrew Montgomery spent the long lockdown that rang out 2020 shooting 12 gardens for his book Winter Gardens (Montgomery Press), which has accompanying text by garden writer Clare Foster. It reveals the beautiful midwinter form, textures and tones of gardens such as Gresgarth Hall (the home of landscape designer Arabella Lennox-Boyd), Great Dixter, Sussex Prairie and Dan Pearson’s garden at Hillside, Somerset.

“I didn’t think it had really been done, and these gardens become a completely different place in winter,” says Montgomery. “If you have a very still misty or frosty morning it can be just as magical as a midsummer morning at 4am. There’s such an ethereal quality.” Alongside the book there will be an exhibition at the boutique hotel and estate Thyme in the Cotswolds and images from the book are available as limited-edition prints (to order at montgomerypress.co.uk).

Light is also a key consideration for landscape designer Cathy Rees, who gardens in the cold hard winters of Maine and last month published Winterland: Create A Beautiful Garden for Every Season (Princeton Architectural Press) – a paean to the innate alchemy of plants and landscape in a largely dormant season. “The golden, sideways light of winter is something I look forward to all year,” writes Rees. “And unlike in midsummer, sunrise happens at a time when I am likely to be looking out of a window or walking out the door. When the azimuth of the sun is low, prolonged sunrise and sunset make for garden drama.”

There are plants that excel in ramping up that drama. After their electric display in autumn, many grasses have their final swansong in the depths of winter when their bleached-out fronds provide a conduit for the magical soft, low light. Varieties of miscanthus have plumed seedheads that, en masse, create feathers of unparalleled beauty when they catch the early morning or afternoon sun; the shorter Miscanthus nepalensis has pendulous golden tassels that shimmer. Finer grasses such as deschampsia, panicum or molinia varieties can create a translucent haze from a distance, while close up their delicate heads will catch tiny drops of moisture to create a glistening effect. Low mounds of pennisetum with their furry bunny-tail flowers take on a similar gossamer presence. Stipa gigantea, the giant oat grass, has elegantly arching stems that create a stunning winter display with a more architectural quality.

There are few landscape designers as adept at creating a four-seasons tableau as Tom Stuart-Smith, whose monograph Drawn from the Land (Thames & Hudson), published earlier this year, is testament to the impressive effects that can be created with form and texture in winter. “I think much more about a plant’s texture than its colour, which is a fairly flexible thing,” he says. “I think about leaf shape – how reflective they are and how large the leaf is – and then I will think about winter shape, and then last of all I think about seasonal colour.” Perennials that hold on to their form are championed – statuesque veronicastrums, echinacea pallida, eupatoriums and asters, all of which set off the movement and tonal contrast of ornamental grasses.

Stuart-Smith can even reduce this process to a formula. “In a garden that needs to have a lot of winter presence I’d use 25 per cent grasses and I will make sure that there’s a pretty good distribution of grasses through the planting.” His go-tos are Hakonechloa (“there’s nothing else that quite has that burnished warmth”), miscanthus varieties and the pale straw verticals of Calamagrostis x acutiflora “Karl Foerster”. At Stuart-Smith’s Hertfordshire home, the hard frosts that take all of these plants into truly Narnia-like territory are, these days, few and far between. But then that fleeting occurrence is also, to a degree, what makes those mornings so breathtaking. “When they do come they are pretty amazing,” he says. “It is a spectacle.”

The trailblazers for this approach were, of course, the Dutch designers and landscape architects, whose championing of a four-seasons approach was largely popularised by Piet Oudolf. His gardens remain some of the best spaces to seek inspiration – his own, Hummelo in the Netherlands, the Millennium Garden at Pensthorpe Natural Park in north Norfolk, Scampston Hall’s Walled Garden in Yorkshire or Oudolf Field at Hauser & Wirth in Somerset.

And for a new generation of designers, the focus on form, texture and movement ripples through most of their designs. Alexandra Noble showed at this year’s Chelsea Flower Show how these kind of textural schemes can even work on a 2m by 5m balcony, and weaves grasses into almost all of her planting schemes. Her favourites include Miscanthus “Silberfeder”, “an elegant architectural form with silver-toned tassels”; the semi-evergreen Anemanthele lessoniana that turns a fiery russet in winter; and Panicum virgatum “Rehbraun” and “Cloud Nine”: “I like to use very large drifts for best effect surrounding evergreen shrubs.”

Indeed, clipped forms bring structure and focal points, whether it’s a hedge neatly trimmed before winter sets in or something more sculptural, such as the clipped yews at the artist Maggie McGrath’s garden, Town Place in West Sussex, where large yews are precisely pruned with organic voids echoing Henry Moore’s bronzes.

Alongside the growing understanding of how much form, texture and movement grasses can bring to the garden is an appreciation of seedheads – some plants retain their form almost indefinitely and the giant spiky spheres of Allium cristophii, the tiered dots of Phlomis russeliana or the jewel-like bracts of eryngium are all in this category. Other pods have a sculptural quality – Baptisia australis has deep black pods in winter with an almost metallic sheen. Seedheads en masse can create extraordinary visual effects in frost or snow – the dots of echinacea and rudbeckia, the umbels of sedums or eupatorium or the candelabra spires of Verbascum olympicum. And yes, it takes some mind-bending mental gymnastics to envision a whole collection of plants through each of its life cycles and then fast-forward to its winter conclusion, but as with all gardening you can gradually add or move plants over time.

Grow yourself happy: the gardener’s guide to wellbeing
How to grow a mood-boosting garden 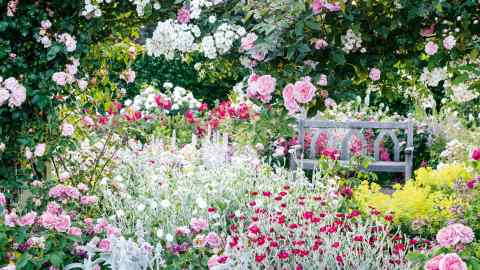 The key thing is to enjoy the garden over winter, whether that’s from a meandering path or a cosy chair by a window. “What’s going to tempt you to go out or look out?” asks Boswall. “I know some of the birds push off to warmer places but mostly in our climate they stay. All these creatures are still out there.” To that end she tries to plant crab apples wherever possible – “Evereste” and “Golden Hornet” are her two stalwarts. They hold on to their luscious fruits – which are red and gold, respectively – well into the depths of winter, providing a rich food source for passing wildlife, which in turn become another part of the winter theatre. It helps too that at this time of year the bare branches laden with fat berries look a little bit like festive decorations – nature’s very own Christmas baubles.

READ MORESnow escape: where to find winter fun in the great outdoors
How To Spend It in... Piedmont 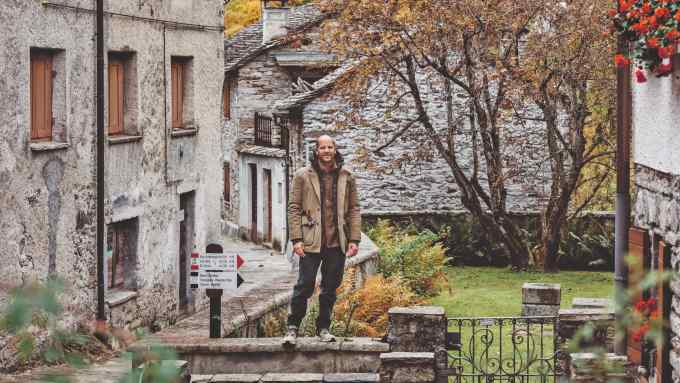