Broad commodity ETPs, which benefit from rising energy and food prices, have attracted $6.8bn this year

Investors have pulled money out of European equity funds and pumped it into commodities in the past three weeks as Russia’s invasion of Ukraine sent financial markets into turmoil.

More than $2bn was withdrawn from exchange traded funds focused on the European equity market in the second half of February, according to data from BlackRock, a trend Karim Chedid, head of investment strategy for BlackRock’s iShares arm in the Emea region, said had continued in early March.

“Over the past 10 days we have started to see [a reaction to the invasion] from investors in terms of their positioning in European equities,” said Chedid.

“We have started to see investors close their positions in Europe. Last week in particular saw significant outflows, not just across the ETF market but the broad asset management industry.”

The exodus, which followed strong buying of European equity ETFs at the start of 2022, was evident across the continent. The Euro Stoxx 600 index has tumbled 10.5 per cent since mid-February, while the FTSE 100 is down 8.1 per cent.

In contrast, while flows into US equity ETFs started off the year muted, they have remained positive with a small net inflow of $200mn in the second half of February, even as European equity ETFs shed $2.1bn.

“It’s largely due to growth fears when it comes to Europe, due to its proximity to the crisis and fears around European equities’ exposure to inflation,” said Chedid of the outflows.

Worries over inflation and the fallout of Russia’s invasion have generated a “significant pick up in demand”, for commodity-focused exchange traded products, however.

So far this year, broad commodity ETPs — which benefit directly from rising energy and food prices — have attracted a net $6.8bn, a marked rise in the pace of buying from 2021.

Gold ETPs, a traditional hedge against inflation and store of value in times of crisis, have seen inflows of $5.1bn, a sharp reversal from the net outflows of $9.9bn witnessed last year.

“Gold and equity [price] correlation drops when volatility in equities picks up. I think that’s one of the rationales why investors have been buying gold,” said Chedid. “It is a potential diversifier.”

During the early days of the invasion at least, investors continued to put money to work in the markets via ETFs, even if at a slower pace.

Net inflows across all asset classes totalled $7bn during the first three days of last week, BlackRock said, compared with $26.1bn during the preceding five trading days. Flows have remained positive since the height of the coronavirus pandemic panic in March 2020.

At the sector level, technology ETFs bounced back after a soft January with inflows of $1.8bn while, unsurprisingly, energy ETFs saw a further $1.5bn of buying to add to the $3.1bn they took in January.

Financial ETFs appeared to hit the buffers though, with net selling from mid-February onwards driving outflows of $1.3bn for the month as a whole.

Chedid said there were signs of investors tilting their exposures towards “quality” companies — typically defined as those with a high return on equity, stable year-on-year earnings growth and low financial leverage — which abound in the tech sector.

“Growth” stocks, such as tech, are also helped by suggestions that the tumult in global markets may discourage developed world central banks from tightening monetary policy as sharply as expected, Chedid said, even if surging energy and food prices are themselves inflationary.

“It’s inflationary but it’s still supply-driven inflation,” he said. “We see this delaying the peak in inflation and perhaps even [resulting in] a higher peak, but it means that central banks are not inclined to react to it.”

The reversal in demand for financial ETFs may also be driven by softening monetary policy expectations, with banks generally seen as benefiting from higher rates as they can widen their net interest spread.

“Selling has to do with curve flattening. Financials tend to do well when rates are rising and yield curves are steepening,” Chedid added.

While monthly data are inherently choppy, the February numbers may point to softening demand for funds that score highly on environmental, social and governance (ESG) factors, with net buying falling to a 12-month low of $5.4bn.

The sustainable investment lobby has been criticised for putting pressure on western energy companies to cut investment in exploration and production, thereby increasing western reliance on Russian oil and gas, and for demonising the arms manufacturers that supply the west’s military.

BlackRock data also show net inflows of $800mn into Russian equity ETFs in February. This was the second highest monthly flow on record, beaten only by March 2014 — the month that Moscow annexed Ukraine’s Crimea region.

Chedid said it was impossible to tell from the data if this represented a genuine desire to increase exposure to Russian stocks or was instead driven primarily by short selling or hedging interest.

However, figures from S3 Partners, a specialist data provider, showed that most Russian equity ETFs had fewer shares being shorted at the end of February than a month earlier.

“It looks like there is a divergence in investing activity based on trade duration. Short sellers are looking for near-term price weakness, while long buyers are looking to long-term price appreciation of Russian stocks that are down 60 per cent to 90 per cent recently,” Ihor Dusaniwsky, managing director of predictive analytics at S3, said last week.

Since then, trading in most Russian ETFs have been suspended by their exchanges. 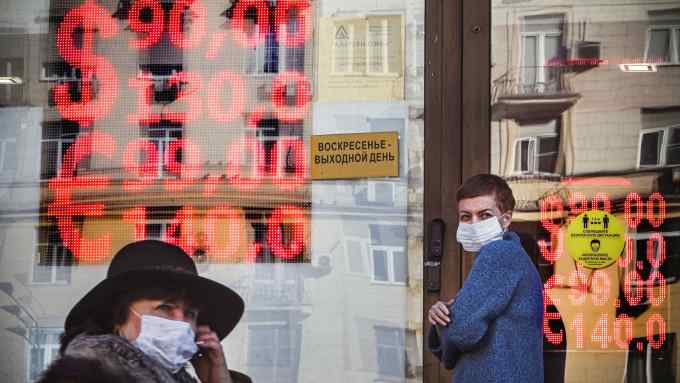