Lead the way with 50% off
Brexit

‘Made in Britain’ takes on new life after Brexit and pandemic

Sign up to myFT Daily Digest to be the first to know about Brexit news.

The number of companies using the “Made in Britain” label surged over the past year as UK manufacturers sought to capitalise on rising domestic demand for goods made in the country after Brexit.

Businesses that use the product mark must manufacture in the UK and use British-based workers. They must also show that they try to source as many of their materials as possible locally and agree to a code of conduct.

The number of businesses applying to use the Made in Britain label rose by 130 per cent in the year to April. This resulted in 508 new members joining the scheme — an increase of 44 per cent over the previous 12 months — with a large number of applicants unsuccessful as they did not meet the requirements.

John Pearce, chief executive of Made in Britain, said the surge in interest was because businesses identified an “advantage in showing that they sell British-made goods”. He said new members were joining every month at a rate that was three times higher than before the coronavirus pandemic.

Brexit and the pandemic had also highlighted the importance of local supply chains, he added. More than 1,600 businesses are signed up to the government-endorsed scheme, which launched in 2014.

“There is a changing mood to buying British things. We do have to build things closer to home. This is not just the old-fashioned message about buying British but because of what it means for quality and sustainability. We’re trying to set some very high standards.”

Made in Britain is a non-profit organisation that mostly works with smaller businesses that have a turnover of less than £30m a year. Its membership ranges from window fitters Everest and Anglian, and building materials group Marshalls, to male-grooming company King of Shaves and coffee-machine maker Fracino.

Four in five of the scheme’s members export and the organisation aims to help those struggling with the paperwork and costs of trading with the EU, in part by encouraging a community of similar businesses to help each other.

“The [Brexit] deadline made a difference at the end of last year,” said Pearce. “Businesses were feeling that they’d be better as a smaller manufacturer with a group of other manufacturers going through the same challenges.” 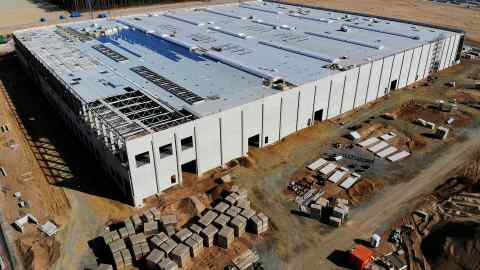 Pearce said British manufacturers had seen “some pain” since Brexit, pointing to problems with couriers and trade red tape, as well as the increased costs of shipping to the EU.

He said that having a higher proportion of locally sourced components had not “immunised” those companies “from the pain of trying to get stuff in from Europe, or sell to Europe”.

He added: “Brexit has improved the focus on what’s here — and where we can buy raw materials and parts from each other. It’s raised questions about where things are coming from and what have we got here that we should use.”

Made in Britain’s agenda fits with the government’s push to encourage domestic supply chains after the pandemic to cope better with any future disruption from global events.