If you think the same, join us
How To Spend It Collecting

How I Spend It: Tamasin Day-Lewis on Roman gold

Why ancient jewellery is the stuff of romance

As a child, I remember being fascinated by the jewellery grown-ups wore before noticing anything else about them. My grandmother always had her “basket brooch and earrings”, a 1930s Cartier flower basket, the flowers twinkling coloured gems. It is the same now with my four-year-old granddaughter, Alba, who looks at my ears and says, “You’re wearing your grapey earrings”.

I was not allowed to wear jewellery except on special occasions and, even then, not the more grown-up Georgian heart crystal hanging from its velvet ribbon or anything gold. Occasionally, I could wear a coral necklace or a silver and turquoise butterfly brooch to parties; otherwise, jewellery was kept in its boxes for when I was older. Pierced ears were verboten.

So the first thing I did when I was 18 was get my ears pierced. And then I began to notice that the most beautiful earrings I had ever seen were worn by my godmother, the novelist Elizabeth Jane Howard, and by my mother. Both were passionate collectors of Roman jewellery, and it didn’t look like any other gold I had seen. It was beaten gold and seemed to catch the light and burnish more brightly. Far from being splattered with cut stones or complex decoration, the pieces were very often just gold. Some looked a little battered. Thick, unevenly shaped hoops or long drops with stones I didn’t recognise at first – carnelian, lapis lazuli, amber. Pearls or glass predominated and there were often clusters of tiny golden baubles set simply onto the gold. There was precious little artifice but mesmerising beauty from an age so far removed that they all seemed to tell a story. I became fascinated by the idea of jewellery that had survived for centuries, in some cases for millennia: who had worn it, and where – imagining their lives and how it had been passed on.

The source of some of my mother and godmother’s Roman jewellery was a jeweller in Burlington Arcade called Richard Ogden, and a lady – now long retired – who had an annual exhibition in Dover Street of Roman jewellery and artefacts. I bought my first pair of Roman earrings, dating from the second century AD, from her when I was in my early 40s. One year, I found a beaten-gold Roman pendant from the same period with a piece of sea-green glass set into it and, just visible, as described on its certificate of authentication, a “couple, arms outstretched, about to embrace”, which captured the romance of the piece. I discovered the Romans’ ability to work glass was so skilled that they could fool people into thinking glass beads and ornaments were actually gemstones. They used sand from around Israel and along the Mediterranean coast, and turned it into sea-hued glass.

There is an added frisson to Roman jewellery: it was considered to be women’s personal property and, irrespective of their husbands’ wealth, they were legally entitled to buy, sell, bequeath or barter it. The stirrings of emancipation, secreted in their homes in hidden troves – what a thought.

My mother had a Roman bracelet in the shape of a coiled snake, which to the Romans symbolised eternal life. I hate snakes and won’t wear it, but the “grapey earrings” that Alba loves I wear frequently. They are a bunch of grapes made from miniature gold balls, and were created using a technique called granulation. Minute grains or tiny balls of gold are applied to a surface in geometric or linear patterns, a technique that dates as far back as the first millennium BC. It is a marvel to see such sophistication yet such simplicity. 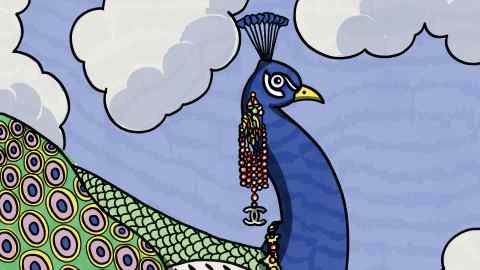 My most recent acquisitions were two pairs of earrings The first is a pair of Roman hoops with shields and clusters of balls from between the first and third centuries AD. Part of the fascination is their provenance: they come from the grandson of a private collector in France who was an amateur scholar and enthusiast of ancient civilisations. The second pair, from the same period, have hexagonal glass beads and pearls. They come from a collector in Cape Cod whose daughters sold his collection of objects, bronzes and ancient glass and jewellery. The earrings came with a letter from their father, written nearly 30 years ago, telling their future owner of his delight and “great pleasure to have owned such wonderful objects and I wish further owners the same fulfilment in collecting”.

Keeping these small treasures with all the imperfections that have scarred them over the centuries, to pass on to children and grandchildren, speaks more to me than the inheriting of modern jewellery. I was lucky enough to inherit a few pairs of Roman earrings from my mother. It is the preserving of history, of something from an ancient time we can only begin to imagine, but it is also the stuff of romance.