Check in to a new clutch of sleek, intimate hotels, from a surf haven north of Lisbon to a farm-turned-plush agriturismo in the Lower Alentejo

Lisbon is the city that keeps on giving hotel wise: every month, it seems, some enterprising architect, decorator or chef announces bold new life being given to a patrician old house. Here’s one from a more leftfield team, promising unique country-in-the-city ambiance: Hotel das Amoreiras, on one of the most photogenic squares in the (already pretty ready for its close-up) enclave of Príncipe Real. Pedro Oliveira and Alicia Valero brought experience in private banking and luxury marketing respectively to their dream of opening a very small, special hotel. In 2016, returning home after stints in London and Switzerland, they found just the site: two adjoining townhouses for sale on the garden Oliveira had grown up playing in.

Besides the two huge suites that take up the entire joined third floor of the hotel, 17 further rooms fill the first and second ones. Promising details include works by Giacometti and Manolo Valdés, lighting by the Florentine designer Michele Bönan, and a hushed, white-on-white private courtyard for breakfast or cocktails. hoteldasamoreiras.com, from €250

Surf, sea and ceviche on the central coast

Around 30 miles north of Lisbon is Ericeira, Portugal’s own surf mecca, where those who dare can ride colossal winter swells that power in from the mid-Atlantic (and those who don’t can watch the action from the picturesque bluffs set behind the beaches). In June, Immerso opened here, bringing a high-bar hospitality that privileges wellness and local experiences (artisan visits and, yes, surf lessons) to the enclave. Now it’s the turn of Aethos, a hotel/nomadic traveller-private members’ club concept based in Milan that also has small boutique hotels in Umbria and Corsica (and will soon add Lisbon and Mallorca to the portfolio as well).

The 46 rooms and four suites at Aethos Ericeira hover cliffside in a sleek three-storey building some 40m above the ocean. Surfboards, e-bikes and sand buggies are there for guests’ use. The kitchen at the restaurant Onda favours the plant-based and locally sourced (but with tartares and ceviches aplenty, too); the spa favours North African traditions, with a hammam and hot limestone slabs. aethoshotels.com, from €200

Melides gets a new house style

Melides, so has said the tastemakers’ grapevine for some time now, is the new Comporta – further south, more spread out, with some intriguing architectural incursions and dynamic buzz around a burgeoning contemporary art scene. It’s where Miguel and Sofia Charters recently opened Pa.te.os – four discrete houses, immersed in cork and arbutus groves a couple of miles inland from the Atlantic. Like an extremely understated compound, they group loosely in 80 hectares of land – separate, private, but not distant from each other.

The sublime is in the palette and materials: Manuel Aires Mateus, the Portuguese architect of the moment (though he’s been that for a decade now) has invented incredible care into materials and palette. All is sand or pearl, caramel or bone: the warm tones of the earth, stone and wood that were the only materials deployed in Pa.te.os’ creation. One of the longest stretches of beach in Portugal is more or less on your doorstep. pateos.pt, from €450

Arcadia rediscovered (and re-made) in the Lower Alentejo

And finally, to the one secreted away deep southern Alentejo that’s made it to the top of my 2023 list: Herdade da Malhadinha Nova. In 1998 five members of the Soares family bought an abandoned farm here, and spent the ensuing 24 years slowly and carefully bringing it back to life – ruined cottage and outbuildings, olive groves and all.

Today it consists of two small hotels, a clutch of villas, a restaurant (open to outside guests), and a small, lovely spa – all spread across Malhadinha’s 450 hectares, well away from each other. The wines win awards, the kitchens source from the Soares’ own estate gardens. Here, too, the family is currently working with architect Aires Mateus on developing a series of new standalone accommodations, including some modelled after (extremely chic) treehouses. Watch this space. malhadinhanova.pt, from €400 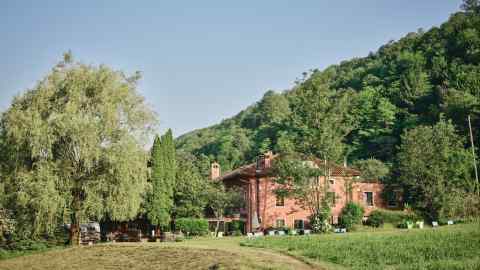