It was one of the more unconventional ways to deliver healthcare. In just 23 days, business leaders, medical experts and public officials came together to transform a giant convention centre on the outskirts of Mexico City into a world-class 424-bed coronavirus field hospital. Together, they gave the Mexican capital a crucial additional weapon in fighting the pandemic at its peak.

In 14 months of operation from April 2020, the Temporary Covid-19 Unit in the Citibanamex conference centre treated more than 9,000 patients who were seriously ill with coronavirus, including nearly 2,600 in critical condition. All but 342 survived — a success rate which was the envy of many established Mexican hospitals.

Patients benefited from access to the latest drugs and treatments to fight coronavirus, such as high-flow oxygen therapy, and sophisticated diagnostics — the hospital had its own testing laboratory. Nobody paid for their stay: the $76m cost of setting up, equipping and running the hospital was met by a private sector consortium. Two-thirds came from foundations created by Latin America’s wealthiest man, Carlos Slim. Mexico City authorities provided the medical personnel.

What was most remarkable was the close teamwork between the public and private sectors in a region where healthcare is often sharply divided between underfunded state-provided services of uneven quality and expensive high-quality treatment offered to those with money.

“Something the private sector has is efficiency and autonomy in decision-making,” says Rafael Valdez, who led the Mexico City hospital’s medical team. “The public health sector can learn from the private sector’s experience and capacity to innovate. For the private sector, this was an opportunity to draw closer to the city government with something of common benefit.”

Coronavirus has hit Latin America particularly hard. With only 8 per cent of the world’s population, the region has suffered almost a third of all deaths. The reasons are complex, including high levels of urban poverty and labour informality. But part of the explanation is to be found in the region’s weak healthcare systems.

“Most healthcare systems in the region are significantly underfunded,” says Panos Kanavos, associate professor of health policy at the London School of Economics and co-author of a study on Latin American healthcare. “Most claim to have universal health insurance . . . but services are fragmented or people don’t have access to them. The only countries which are relatively well-funded are Costa Rica and Uruguay.”

Spending on health was just $1,025 per person in Latin America and the Caribbean in 2017 — a quarter of the average in OECD countries when adjusted for purchasing power, according to a 2020 OECD report. Exacerbating the divide between rich and poor, only 59 per cent of Latin American health spending came from governments and compulsory health insurance; the remainder was covered by private insurance or out-of-pocket payments.

Jeremy Veillard, senior health specialist for Latin America at the World Bank, says that, as well as patchy coverage and limited access to healthcare, quality is a significant issue. “The gaps in quality are so large that we’re going to need a mobilisation of all the actors — public and private sector — to bridge those gaps.”

The way healthcare providers are paid in Latin America exacerbates the problem, because payment models are generally based on fees for services provided. “There are very few incentives to adjust payment for the achievement of better clinical outcomes,” Veillard adds.

Nonetheless, he believes that private sector healthcare companies have an important part to play. “There is space for the private and public sectors to find complementary roles in a way which is inclusive and does not turn the private sector into providing services only to the wealthy,” he says.

The Inter-American Development Bank (IDB) estimates that more than $150bn needs to be invested in hospitals, health centres and medical equipment in Latin America to bring them up to international standards. “We strongly believe the private sector is key for financing these challenges,” says Cristina Simón, head of social infrastructure at the IDB’s private sector arm.

The IDB has been promoting public-private partnerships to help build hospitals and clinics: the private sector builds the facilities and runs them on a long-term contract, which is supervised and funded by the public sector.

“According to a study done in Chile, the facilities cost 22 per cent less . . . and are completed 35 per cent faster,” Simón says.

Not everyone is convinced, though. Maria José Romero, a policy and advocacy manager at the European Network on Debt and Development, has co-authored a paper criticising PPPs in Latin America.

“Universal access to healthcare can’t be guaranteed by market forces and dynamics,” she says. “Even in cases where the private sector provides high quality services, someone will have to pay for this and there is a high risk of excluding those who can’t pay.”

IDB Invest’s Simón says the key to ensuring successful PPPs lies in the public sector preparing the contracts properly and points out that they are now being used, or about to be used, in Chile, Brazil, Peru, Mexico and Colombia.

Another way in which the private sector has helped during the pandemic is in innovating and spreading telemedicine, using online consultations and diagnostics to benefit those on low incomes or in far-flung communities. “This has come to stay . . . it is huge,” she says.

Valdez has now returned to the private sector after running the field hospital and works for Pfizer. One of the most important legacies of the Mexico City project, he says, was a detailed set of instructions explaining how to set up a field hospital at short notice.

“In future, if there is a major earthquake or pandemic, you can convert spaces like this easily,” he says. “It’s a complete operations manual, open to everyone”.

Of the pioneering facility that harnessed private and public resources to save lives at a critical moment, Valdez says simply: “This has been the most important experience of my professional life.” 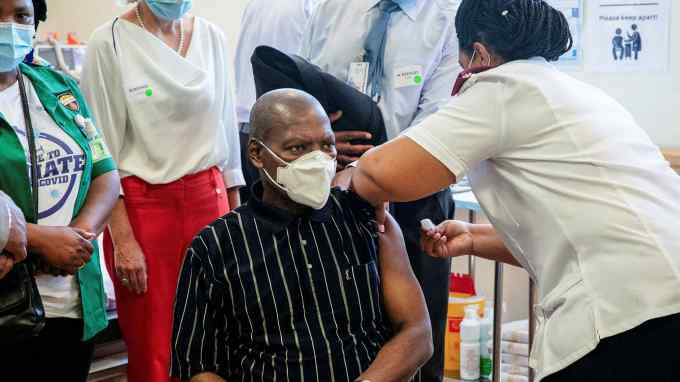