The new allure of the city stopover

From transoceanic corridors to the Covid layover, it’s not about the destination, it’s the way you go that counts

I was checking a flurry of new WhatsApp messages on the way out of my opticians in Soho: “Oh no, SORRY!” read the first, accompanied by a screengrab of a news story detailing countries that the UK government was adding to its red list of forbidden destinations: Afghanistan, Bahrain, Costa Rica and… Egypt. Like most catastrophes, it took a moment to sink in. After amassing a small fortune in British Airways vouchers for cancelled flights since last March, I was about to head to Cairo on BA400, and all seemed certain, albeit floodlit in amber. Covid cases in Egypt were falling and I had numerous assignments lined up. I had another flight booked from London to New York a few weeks later, by which time surely the Transatlantic corridor would be open. I also had a cat-sitter confirmed – perversely, a friend flying in from Manhattan for the duration, ready to quarantine with my beloved Beamish. I stared at my phone and fast-forwarded through denial and anger, danced around bargaining, skipped depression and hurled myself into acceptance.

I am used to spanners being aimed at my works with velocity. I once accepted an assignment that involved flying to Guayaquil in Ecuador, taking a cruise, then heading back from Santiago in Chile. The assignment fell through (the yacht wasn’t built), but the business class flights paid for by someone else were still mine. As was the relief that I didn’t have to go on a cruise. So I looked at a map and secured myself a writing gig in Bolivia, situated between A and B. Instead of disappointment, I had 10 days of transcendental wonder amidst the salt flats in the Andes and wept over the beauty of the flamingos in the blood-red Laguna Colorada.

I would still go to Egypt. I needed to. I can’t work without travelling. I would also still go to New York. Safe in the knowledge that a BA refund was imminent if they cancelled the flight (they did), I rebooked with Egyptair: London>Cairo>New York. Double-vaccinated and brandishing ruinously expensive negative PCR tests, what was otherwise impossible became possible. It would mean an 11-hour flight in economy, with an airline that doesn’t serve wine, but I could self-medicate my way through the bulk of it.

Travel exacts a toll and yet there will never be a day when we don’t need to move, for love or water…

The larger question was: Was this okay? The world is still facing a crisis. Whole American states are populated with vaccine refuseniks, Australia hasn’t even begun to see the worst of it yet, and the death toll in Brazil puts my bitching about lockdown in the UK into sobering perspective. A lot of it is, of course, political. As John O’Ceallaigh, director of luxury travel consultancy LUTE, says: “A lot of the travel restrictions have become a smokescreen for governments’ failings at home. The consequences are more severe than simply postponing a nice holiday. These measures are destroying trade, severing families and obliterating livelihoods in tourism-dependent economies the world over.”

Travel PR Paul Charles, who has become the de facto voice of the industry during the pandemic, agrees: “The vaccines clearly work, so they should be enabling greater movement, not only to allow us to see family abroad again, but also to protect the many thousands of jobs still at risk from keeping borders and quarantines in place.”

At the same time as I was in Egypt, (circuitously) en route to New York, a friend was in the Bahamas for 14 days for the same reason. No hardship – he had planned a holiday anyway and has a thriving business in Manhattan he needed to tend to, but doesn’t have a Green Card to fly direct. I have numerous NY-Lon friends, and know Transatlantic families, who have been reunited by going to mutually accessible neutral territory in the Caribbean. Travel to Mexico has boomed – partly because it has offered an easy holiday for Americans, but also because it’s a useful two-week decompression chamber for Europeans heading Stateside. For Americans there’s Dubai: an efficient hub served by the most glittering of airlines, but it’s in the wrong direction, and devoid of Mayan ruins and yoga retreats to keep you busy while you tread water.

Social media is full of individuals desperate for everything to open up, and counter-opinions. But away from all the Zooms and 280-character hot takes, there are real people living it. I need to travel to work. But I won’t starve. In Cairo, I hired an Egyptologist to show me around the Museum of Egyptian Antiquities, which is slowly but surely being mothballed ahead of the opening of the shiny new Grand Egyptian Museum in Giza. I spent hours entranced by everything he told me, as well as by the weathered Victorian wooden cabinets and signage within the halls. When I walked around the room containing the priceless golden treasures of Tutankhamun, there were just three other people in there, and one of them was a security guard. Afterwards, I asked my guide what he was doing at the weekend. “Nothing. Almost all my tours were cancelled this summer, and it costs a fortune to keep the air conditioning running for my children. But when the temperature is in the mid-40s, we have no choice.” 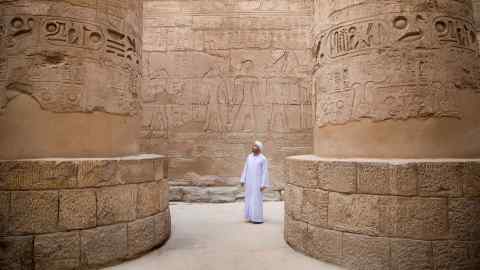 I’d never been to Egypt before. Work took me there, then I spent longer than originally anticipated, killing the necessary time off UK soil to be allowed entry to the US. I lucked out. I’m never again going to have the privilege of 5,000 years of glory in front of me without 10,000 people in the queue behind me . Walking into the tomb of Ramesses IV in the Valley of Kings, with its cobalt star-covered ceiling and dense, luminescent hieroglyphics, was one of my life’s greater experiences (as was chasing a litter of kittens around in the shade of the Temple of Isis on the island of Philae). While I sat out the end of my 14-day “transit” in the surreal bliss of the pool at the Oberoi Sahl Hasheesh, next to a reef full of rays and fluorescent Red Sea fish, I read Olivia Laing’s collection of essays on “art in an emergency”, Funny Weather. In a chapter about Brexit and borders, she sums up so much profoundly and succinctly: “Travel exacts a toll and yet there will never be a day when we don’t need to move, for love or water…” Travel is not a luxury. Getting from A to B will always be fundamental, for all.

All travel details were correct at time of going to press but are subject to restriction changes.