Large parts of the continent measure low levels of soil moisture as temperatures reach 1.6C above average in June

We’ll send you a myFT Daily Digest email rounding up the latest Wildfires news every morning.

The fire season in Europe has begun earlier than usual as the continent experiences heatwaves sooner and with more intensity than in 2021, which was notable for being a year of catastrophic blazes worldwide.

The first heatwaves of 2022 resulted in fires in Spain and Germany as early as June, when temperatures in parts of each country reached a high of 43C and 39.2C respectively. France has also suffered, experiencing its hottest month on record in May as the thermometer tipped 39C in the Rhône valley.

Overall, Europe as a whole had its second warmest June on record at about 1.6ºC above average temperatures, according to the EU earth observation agency Copernicus.

While wildfires are not unknown in the Mediterranean region during this time of year, the scale of the events are remarkable with the current burnt area being four times greater than 2006-2021 averages, according to the European Forest Fire Information System.

Dry soils create the conditions for combustion. Most of mainland Europe and the dense forested lands of Sweden and Norway were experiencing low levels of moisture, according to Copernicus.

In northern Italy, the low levels of the Po river and the resulting drought in the economically important Po valley have prompted a state of emergency to be declared because of a lack of water availability.

Dry vegetation, after below average precipitation in winter, also acts as fuel and provides a greater risk of flammability, potentially making the blazes larger and more severe.

While the EU’s crisis management commissioner Janez Lenarčič has outlined plans to “boost the continent’s preparedness to face forest fires” with 13 firefighting aircraft to offer protection, one avenue of monitoring for risk will lie in soil moisture levels.

A recent study on fire activity by European academics and environmental engineers observed that the destruction by fire of European forests that act as a carbon sink — and also contribute to biodiversity and moisture levels — was likely to compound the frequency of heat-induced fire weather, just as ever-rising carbon emissions are contributing to global warming.

Temperatures have already risen at least 1.1C since pre-industrial times. The UN IPCC report signed off by 270 scientists from 67 countries earlier this year concluded that wildfires were likely to become more frequent and intense across Europe because of climate change, particularly in southern regions. 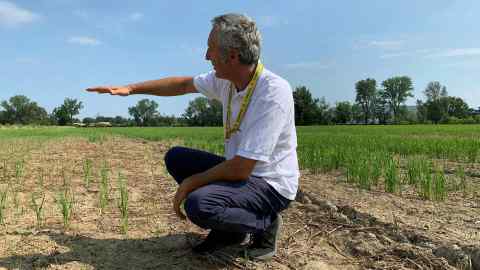 New fire-prone regions in Europe could also emerge in northern and central Europe in the years to come.

Investment bank Jefferies highlighted in a note to investors last week that prevention of future fires, at a time of extreme weather due to climate change, would require better prevention and suppression methods.

The bank concluded that companies involved in the control of fires, such as makers of helicopters and firefighting vehicles, fire retardants and safety apparel, would benefit from the demand.

It identified Spain as being one of the European countries that had implemented measures to reduce the number and size of forest fires, requiring a combination of better forest management, forecasting and land irrigation.