Is this the best whisky bar in the world?

The world is full of luxury hotel bars with big-ticket whisky lists – lists created, all too often, with an eye on the bottom line, rather than any real heart. So when one of my favourite whisky writers, World Atlas of Whisky author Dave Broom, mentioned he was working on a new hotel bar in Braemar, my ears pricked up. When he added that it was in gallerists Hauser & Wirth’s hotel The Fife Arms, and designed by Russell Sage, my ears pricked up even more: it sounded like a dream team.

And Bertie’s is a gem. Furnished in the style of a sumptuous Edwardian library, and lined floor-to-ceiling with 365 back-lit whiskies that suffuse the room with an amber glow, this 15-seater lounge looks more like a liquid installation than a bar – a place to hole up on dark nights when the Highland rain is lashing down outside.

The whisky list Broom has created is naturally dominated by Scotland – but it features drams from all over the world, grouped by style rather than place of origin, to make the whole thing more navigable. “Doing it like this allows you to show commonalities and differences between different distilleries and regions and countries, and open up whole new conversations about whisky,” says Broom. “It’s not dumbing it down. Far from it – it actually takes you on a deeper dive.”

In the “Fragrance” section, a meadow-y Linkwood 12yo (£9) from Speyside rubs shoulders with Hakushu 12yo, a cool green single malt from the Japanese Alps (£22.50); in “Fruity” a luscious wine-cask-aged malt from Starward in Australia is contrasted with a 17yo malt (£32.50) from Royal Lochnagar, a historic Highland distillery just a stone’s throw from the hotel.

Broom has given unusual prominence to grain whisky – more often the unsung hero of Scotch blends. “Grain whisky is often dismissed as the Scottish answer to vodka – but it can be absolutely delicious and full of flavour,” he says, picking out a Cambus 29yo (£26) that’s all “runny honey and baked banana”.

The list is peppered with rarities from distilleries no longer in production: Littlemill, Rosebank, Mosstowie and the storied Islay distillery Port Ellen. But it also features young drams from some of the world’s newest producers: Cardrona in New Zealand and Torabhaig on Skye.

Bertie’s is a real destination bar – yet almost half of the whiskies in it are priced at under £10 a dram: “It was really important for me to have that element of affordability,” says Broom, “so that people feel free to experiment.”

The bar also does whisky cocktails and posh bar snacks and a quartet of whiskies matched with different types of caviar. But the real theatre is in the bottles around you – all of them close enough to touch.

Broom is working with The Fife Arms to curate a series of house whiskies too, in partnership with the indie bottler Adelphi. I wonder, given their artistic connections, whether Hauser & Wirth might be planning a specially commissioned label for them, à la Mouton Rothschild? “We have been talking to our artists about creating something for Bertie’s,” says Iwan Wirth. “But it will not be a label as I think artist labels are passé. What we are doing is looking at bottles as sort of sculptures.” He won’t reveal more, for now, except that he hopes to have something to show the world in about 12 months’ time. Just the excuse, if it were needed, to start planning a return visit. 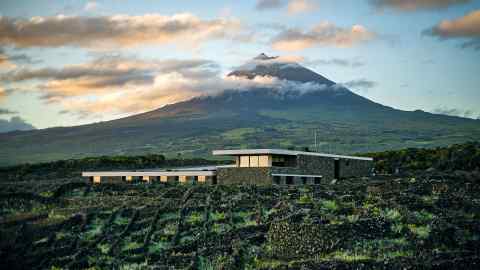