If you think the same, join us
US Treasury bonds

Tommy Stubbington in London and Kate Duguid in New York

A clutch of investment banks have cut their outlooks for Treasury yields after a rally this summer in the $22tn US government bond market blindsided much of Wall Street.

The 10-year Treasury yield — a key reference point for assets around the world — sank to 1.13 per cent earlier in August as the price of the debt increased sharply. The moves came despite the vigorous economic recovery and signs the US central bank was edging closer to ending its crisis-era stimulus programmes — factors that typically send yields rising.

Analysts and investors have been forced to rethink earlier predictions that yields would top 2 per cent by the year-end. While a rebound from the recent lows has begun, few expect yields to reach levels previously predicted. Goldman Sachs and JPMorgan, two big participants in US debt market, cut their forecasts this month.

The trajectory matters not only for investors in the world’s largest fixed-income market: it could also prove crucial for the future of a stock rally that has carried the blue-chip S&P 500 to a succession of record highs.

The 10-year yield is now expected to rise to 1.8 per cent by the year-end from 1.31 per cent at present, according to the average forecast of analysts compiled last month by FactSet, before the recent revisions. That average has fallen from 2 per cent in May.

JPMorgan last Friday cut its year-end 10-year forecast from 1.95 per cent to 1.75 per cent, arguing that the Federal Reserve’s apparent willingness to tighten monetary policy should keep a lid on inflation expectations.

Inflation is anathema to bond investors since it eats into the income streams the assets provide, so more subdued price growth in the future should help ease the longer-term pressure on Treasuries, the New York bank said. Bank of America, Commerzbank and ING are also among the banks that have cut their forecasts as markets rallied.

As they update their forecasts, some analysts and investors are questioning whether the expected rise in yields, even if less severe than initially expected, will derail the progress of equity markets.

Stocks are typically sensitive to the level of bond yields, with lower yields making the potential returns from holding equities more alluring. A rapid ascent back to 2 per cent — a level some analysts still expect the 10-year yield to reach by year-end — could unsettle equity investors, according to Seema Shah, chief strategist at Principal Global Investors.

“For risk assets it’s not so much the level of yields that matters, but how quickly they rise,” she said. An increase of 0.7 to 0.8 percentage points “in just a few months would probably be disruptive to equities”.

Analysts are watching this interplay with stock markets as they revise their assessment of where bond yields are heading. Goldman Sachs last week cut its year-end 10-year Treasury forecast to 1.6 per cent from 1.9 per cent, following a “puzzling” drop in yields in recent months.

At the same time the bank raised its year-end target for the S&P 500 by nearly 10 per cent to 4,700, arguing that lower yields will be supportive for stocks. But if rates rise faster, the US stock index is likely to dip slightly by the end of 2021, its stocks analysts said.

Citigroup, in contrast to its rivals, is sticking with its prediction that the 10-year yield will rise to 2 per cent this year, a move it said would “put pressure on global equity valuations”. The bank said it was lowering its recommendation on US stock markets, which are heavily weighted towards technology companies whose shares are considered especially vulnerable to interest-rate fluctuations, to neutral.

Investment bank analysts have joined investors in blaming much of the lurch lower in yields on “technical” factors, arguing that the economic outlook implied by levels last seen in February is too pessimistic given the rapid economic recovery under way. The move has been painful for big asset managers who were betting on higher yields, as well as hedge funds that had piled into the “reflation” trade earlier in the year.

Citi strategists said last month that there was evidence the rally was being driven by “forced buying” as bearish investors threw in the towel on lossmaking trades.

Treasury market positioning data corroborate this breaking of the bearish consensus among investors. Figures from the Commodity Futures Trading Commission showed that speculative investors’ positive bets on Treasury futures — a proxy for the broader US bond market — at the end of July were the largest in about two months. 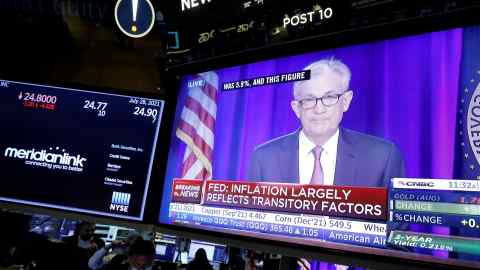 There are signs that the tide may be turning, with last week’s strong US jobs data helping to lift yields to their highest in more than three weeks. Traders will be watching Wednesday’s US inflation data for further signs that price rises are proving more persistent than expected.

Another key test of the revised forecasts will come later this month when Jay Powell, Fed chief, is expected to lay out the timeline towards “tapering” the Fed’s bond purchases at the global central bankers’ summit at Jackson Hole, Wyoming.

Still, if the rise in yields continues and eventually prompts a stock sell-off, some analysts argue that bonds may begin to rally again as investors seek safe assets.

“Getting to 2 per cent from here would be a pretty sharp adjustment,” said Antoine Bouvet, a senior rates strategist at ING. “There’s a feedback effect which means risk assets will be hit and some money will flow back into Treasuries. It’s a natural brake on rising yields.”