If you think the same, join us
The HTSI Autumn Arts Issue 2021
See all 13 stories
How To Spend It Style

The exquisite nonchalance of Isabelle Huppert

In a candid conversation, the French actress discusses performance, personality and presence with her friend, the film director Florian Zeller

Florian Zeller: I remember one night three years ago, we were walking down the streets of New York talking about Timothée Chalamet and just at that moment we passed the “Paris” cinema where Call Me By Your Name was playing. We had not seen it, and you wanted to. It was the last screening and with the jetlag – because we had just arrived from France – it was like going to the cinema at six in the morning… And I remember thinking to myself, “She never sleeps!” Every time I think of NYC, I think back to that. They say it’s a city that never sleeps, and I wonder if the same should be said about you.

Isabelle Huppert: I don’t sleep a lot, it’s true. But it’s not at all because sleeping makes me anxious. On the contrary. If there is one moment that I love, it’s when I go to bed. It’s a special time. To read and to return to an extremely private world. But generally speaking, it’s true, I would like to sleep more. Fortunately, when I need them, I can easily take short naps. A bit like Napoleon. I hope that’s the only thing I have in common with him...

Seen from the outside, one might imagine it’s due to overactivity. But that’s not how I experience it. It’s the opposite. Because what I do requires very little effort…Especially cinema. I read an interview with Anthony Hopkins the other day about your film [The Father] in which he said that the acting came very easily to him. I was relieved to read that because I completely relate to it. For me, it’s a very simple thing. It actually requires very little effort. That has always been the case.

FZ: One time, Anthony Hopkins asked me which actor I liked working with, and I mentioned your name, and he replied straight away: “Of course! She is the greatest!” Often, in order to achieve the status of “great actor”, actors choose roles in which they can be as far from themselves as possible – as if the power of the performance lies in their capacity to transform. I’ve always had the opposite opinion as far as you are concerned. As if you were always yourself, from one role to another, from one genre to another, and that in reality you go towards the characters less than letting them come to you.

IH: Absolutely. Maybe I wouldn’t be able to do otherwise. But that’s the way I am. I never have the feeling that I’m going towards a character. I never feel that I’m constructing the character from things that are foreign to me. On the contrary, I have the feeling that everything comes from within. I hope that doesn’t prevent variation in my work, but I think that it’s the best way to communicate life. My concern is to embody things as much as possible. For me acting is a very intuitive process – to simultaneously allow being oneself and infinite versions of oneself. And to meet all the versions that can be found in the same character. I never see a character as only one note.

FZ: And what remains of this character once the filming is over or the curtain has fallen?

IH: Nothing. Nothing at all.

FZ: Seeing you the other night on stage in The Glass Menagerie, I felt the care with which you had chosen your dress. The choice alone was already theatre. I also remember your red dress in my play The Mother… And the importance it held in the show… Is this the way your characters appear?

IH: The first dress that you see in The Glass Menagerie is mine. This extends exactly to what we were just talking about: using my own dress on stage is a way of going through oneself again and again. I often do this in the theatre. In this particular case I wore this dress one day, during a rehearsal, and the director Ivo van Hove saw it and wanted to keep it… But now, it belongs to the show. These dresses have a special meaning for me. Likewise, when I played Hedda Gabler, at the beginning of the play I wore a red velvet dressing gown that I bought in New York. As soon as I put it on, it gave me a particular feeling – as if I was coming out of my bedroom and going straight on stage. And it created a great sense of intimacy with this character. It helped the process.

FZ: What becomes of all these dresses?

IH: In general, in the theatre, costumes belong to the show. We rarely keep them. I kept the dress from The Mother, but that’s an exception. On the other hand, in the cinema, I often keep the costumes, even if I don’t always know what to do with them. It’s strange. For example, I have the coat from Elle [the 2016 thriller directed by Paul Verhoeven in which Huppert plays a rape victim]. But I’d find it hard to put it back on.

Beyond the costumes, I have nothing left of the characters I play. No mental or spiritual trace. For me, acting happens when it happens. In the moment. Only in the moment. I don’t anticipate it, and then I forget.

FZ: Anthony Hopkins isn’t the only one to say that you are the greatest. The New York Times ranked you as the “best actress in the world” last year. How did you react when you read that?

IH: It’s a heavy load on my little shoulders. But what caught my attention was that they highlighted my choice of roles and my choice of directors. Through me, the directors were the ones bringing the performance to light. Although it makes me very happy, there is always something inside me that says that I don’t completely deserve these honours. There are no objective criteria. Why, all of a sudden, are there things we do that hold people’s attention? I don’t quite have the answer. In the end, I express myself in a very narrow field which is multiplied tenfold. And that’s the strength and beauty of cinema.

FZ: This same article said, notably, that you’re not afraid of anything. Is that true?

IH: I don’t see any reason to be afraid. Once I have decided to do something, a role, I don’t ask myself certain questions. I don’t try to find out if it’s right or wrong. I make aesthetic choices without any moral judgement. I imagine that this gives me a certain freedom. In the case of Elle, for example, it’s obviously a morally ambiguous film. But it’s only by eliminating any ethical questioning from the outset that it can be done. Even if it means risking being misinterpreted. For Elle, there were voices that were raised, fortunately they remained in the minority, and it didn’t hinder the life of the film. But if I had asked myself the question beforehand, it might have dissuaded me from doing it.

FZ: And the actress who is about to go on stage, would you say that she’s not afraid of anything either?

IH: There is simply stage fright. Theatre makes you very fragile. The more it goes on, the more it is like that. I think you need a bit of courage to go there. But that is also part of the pleasure, when everything is coming together backstage. The moment when you are getting ready, when you are alone in your dressing room, these are very precious moments in the life of an actress: moments that are extremely simple. You forget everything. You are only in anticipation of the pleasure to come.

FZ: To the extent of preferring this moment to the performance itself?

IH: No. The pleasure on stage is even greater. There is nothing but pleasure. But you don’t get there right away. It comes a bit later, as the performance progresses. When you get closer to land. Even if the danger, the possibility of falling is still there… To reassure yourself, you say to yourself, “If something went wrong, what would be the worst punishment? No one would come and kill you! So it’s fine…” Despite everything, to evoke this experience, I resort to strong and fragile images. This is because theatre is an experience that consists of putting living beings in front of living beings, so there is a very strong emotional charge, and it is also very difficult.

FZ: And this crossing, does it take on another dimension when you work in another language?

IH: I always feel like a different person when I act in another language. I felt it very strongly when I played The Mother for example. I was entirely myself, but at the same time slightly different. I really liked that. And it is a very strong memory for me. But I’ve always liked it. I started filming abroad very early on, and it has been a part of my life. It’s not a need, but quite simply a reality. Cinema is like a world planet. It is a language beyond language.

FZ: Your character in The Glass Menagerie says: “There’s so many things in my heart that I cannot describe to you.” Does acting allow you to express all that is in your heart?

IH: This mental state that I navigate when I play a role, however small it is, is vast enough to make me feel like I’m affirming something of myself. Whether you see it or not in the end, what I feel when I do it is a feeling of self-affirmation. Afterwards, is everything expressed? Probably not. If we continue to do what we do, it’s because there is an answer that is never given. But it is an answer to a question I try not to know. This is how I find the means to constantly go under someone’s gaze.

FZ: And do you think you are the same actress depending on whether you are watched by a man or a woman?

IH: I think so. I am the same. Perhaps I am not, but I don’t foresee that difference. Maybe the viewer notices a difference, I don’t. And I hope, these days, that I will keep this innocence. I wouldn’t want to think that because it’s a woman, it’s different. It’s a relationship with a director, not with a gender. For me, there is a pleasure in the quest for the gaze. Deep down, I think I like to be looked at. Quite simply.

Explore the series
READ MOREThe HTSI Autumn Arts Issue 2021
Anatomy of an art fair. Which type are you? 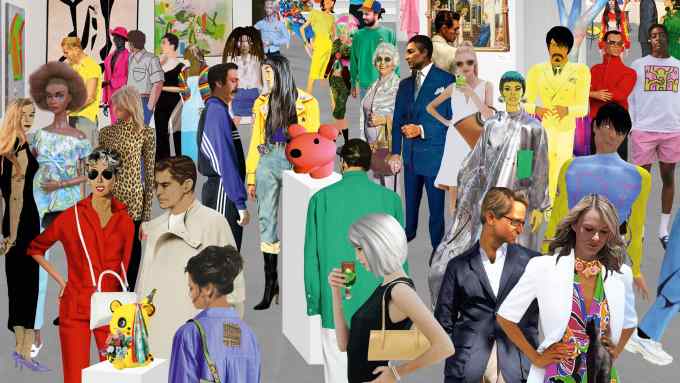