A gastronomic odyssey around Lisbon with Nuno Mendes

This is how Nuno Mendes eats a pastel de nata (or Portuguese custard tart). First of all, he likes his to be well baked, with patches of dark brown and even black. Then, rather than finish off the whole thing in one or two bites (as I would), he uses a small spoon to scoop out the custard. It’s something he picked up as a kid sitting at his grandmother’s elbow. He would pilfer her coffee spoon and the traces of roasted brew would add to the flavour. “The secret is to leave a bit of custard at the end,” he says, relinquishing his spoon and dispatching what’s left – mainly pastry crust – with a double espresso.

We are meeting at the patisserie of the Bairro Alto Hotel in Lisbon, where the chef is creative director of food and beverage. It’s the starting point for our day-long tour of the city where Mendes grew up. He wants to take me to his favourite cafés and restaurants, introduce me to the people showcasing the best Portuguese produce and show me how to live and dine like a Lisboeta. It’s all a precursor to the launch, on 21 March, of his three-storey restaurant Lisboeta, for which reservations are now open. His “love letter to Lisbon” on Charlotte Street will mark his much-awaited return to the London restaurant scene.

Few chefs have had a more seismic impact on dining in the capital than Mendes. He helped establish east London as a culinary destination with Bacchus in Hoxton (his first venture from 2006), The Loft Project in Haggerston (a supper club launched in 2009 from his own home) and Viajante in Bethnal Green, which opened in 2010 and picked up a Michelin star within a year. When hotelier André Balazs made him executive chef at Chiltern Firehouse, he went from auteur cook to superchef, with everyone from Tom Cruise to Madonna eating his American-inspired menu of Caesar salad, steak tartare and those signature crab doughnuts.

A chef’s chef, Mendes is known in the industry for nurturing talent and championing others. And that generosity of spirit is more than apparent at the first stop on our tour, the farmers’ market in São Paulo Square. Run by Rita Santos, owner of Comida Independente, a store that stocks food and wine from independent producers around the country, the Saturday market attracts a diverse crowd of vendors selling fruits, vegetables, artisanal breads and cheeses among other items. Mendes commutes between Lisbon and London, where his partner and three children live, so he’s rarely in the city on Saturdays. He is particularly excited to be here today, beelining between stalls and engaging with producers, almost vibrating with enthusiasm.

We stop at a stall run by João Pratas of Casa Pratas, a honey producer and cheesemaker from Azambuja, north of Lisbon. His 20-day-old goat’s cheese is tangy and creamy but nothing compared to the 45-day-old version that tastes even “goatier”, as Mendes puts it. We then head over to the stall run by Tiago Sena, a mushroom forager who criss-crosses the country looking for fungi. It’s been a dry season, he reports. Fewer varieties are available. Today, he is only presiding over chanterelle and trompette, which nonetheless look ravishing.

For Mendes, this market isn’t just a showcase for impeccable homegrown produce. It’s part of the bigger story of how Portugal reconciles with its own food culture. He is particularly keen to showcase the diversity of ingredients that make up Portuguese cuisine and how distinct it is – despite touchpoints – from Spanish cooking. “Coriander is never used in Spanish cuisine,” he points out. And owing to Portugal’s colonial past, many dishes have more kinship with Asian cuisine, such as chamuça (a version of Indian samosa). As more Portuguese chefs have turned their backs on their culinary traditions to look abroad for inspiration, Mendes is dedicating his efforts to celebrating the country’s indigenous cooking.

Bifanas are a culinary heirloom that could hardly be forgotten. A pork steak sandwich, the best can be found at As Bifanas do Afonso, a hole in the wall on Rua da Madalena. Normally, Mendes ends up here around three in the morning after a big night out. At the counter, the vendor heaps strips of dripping pork into our baps. We squirt on mustard and chilli sauce, while Mendes describes the “super sloppy, really dirty” version he will offer at Lisboeta. It will be part of a menu of afternoon snacks served at the ground floor counter; it’s also where you’ll find Nuno’s baked milk custard tarts, called queijada.

No sooner have we wolfed down our bifanas than it’s time to go for lunch. Mendes has a lot of gastronomic traditions to show me. At Fidalgo, an old-school, family-run restaurant on Rua da Barroca, which Mendes and his father first visited in the early 1980s, we start with plates of smoke-cured sausage, known as linguiça. Then, it’s Mendes’s favourite, octopus with white bean stew, brought to the table in a black cauldron pot, with chilli and rum oil to drizzle over. Over hearty bowlfuls, Mendes laments the gradual disappearance of the “food from the tasca” served in traditional restaurants. At Lisboeta, he intends to revive the tradition of eating tachos (pots) and family-sized sharing travessas (platters).

Championing Portuguese food has become a vocation for Mendes. When he was growing up in the ’80s, a career in food in Portugal was not an option. He left to study marine biology in Miami. But his passion for cooking remained. After a year spent working on the family’s dairy farm in Alentejo, he ended up at culinary college in San Francisco. He worked under chefs like Wolfgang Puck and Jean-Georges Vongerichten (in the US) and Ferran Adrià (at El Bulli in Spain), before moving to London. But the paucity of quality Portuguese cuisine in the capital pained him. He was particularly miffed when food was labelled “Iberian” because the chef thought that Portuguese was inferior.

Having children consolidated his wish to reconnect with and honour his national cuisine. In 2015, he opened Taberna do Mercado in Spitalfields, offering elevated Portuguese staples (it closed in 2018 in the wake of financial difficulties). In 2017, he published Lisboeta, a collection of recipes inspired by Lisbon and the launchpad for this new venture. In it, he pays tribute to his late grandmother, who cooked dishes like cozido (meat stew), canja (rice porridge) and migas (a dish made from bread soaked in milk and fried in a “shitload of garlic and coriander”).

Despite all the acclaim, doing business in London has always been challenging for Mendes. Rents are onerous. Previous ventures that closed have made him wary. And despite the financial benefits that came with working at Chiltern Firehouse, he hasn’t been able to parlay his vision as a chef into a sustainable, sizeable income (he plans to relocate with his partner and kids to Lisbon, which is far more affordable).

In May 2021 he officially parted ways with Chiltern Firehouse, though he was ready to move on before that. Lisboeta has been made possible in part because rents in central London became more affordable. It also feels like his most personal project, a step away from the high-concept gastronomy that previously won him accolades. “I don’t feel comfortable opening a restaurant that is just that,” he says, “It is so out of sync with the world. Ultimately [an informal, accessible restaurant] is the kind I like to go to.”

Quiosque São Paulo, our next stop, is the oldest and only privately owned kiosk in Lisbon. In 2020, it was taken over by André Magalhães, the food and wine writer turned chef behind Taberna da Rua das Flores, one of the city’s most celebrated restaurants. Rather than serve the soft drinks and food that are customary at these kiosks, he devised a menu of petiscos (snacks), xiripitis (liquors) and aperitifs based on traditional recipes. These include Autedor, a dry white port and cherry liquor seltzer based on the drink “Outdoor” from Lisbon’s historic British Bar, and Zanzibar, our drink today a beer shandy with ginger syrup, lime juice and chaat masala. It’s also where I learn that a ceviche dish called punheta de bacalhau translates as “handjob of salt-cod”, named after the way the locals would agitate the briny fillets in the city’s fountains to wash off their saltiness. 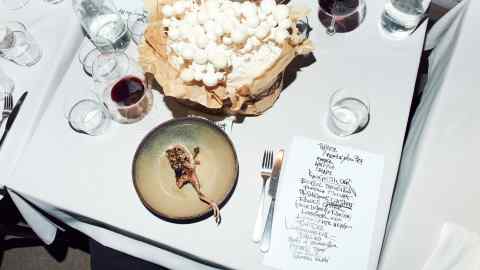 We say goodbye to Magalhães and jump in a cab for dinner along the waterfront at our final destination, chef João Rodrigues’s Michelin-starred restaurant Feitoria. Rodrigues is not only helping to promote the country’s native ingredients through his Projecto Matéria, a non-profit organisation that showcases producers and farmers, he is also putting homegrown produce at the heart of his fine dining menu. Our nine-course meal – served in a dimly lit room with white tablecloths and gloved waiters – features artfully prepared dishes of trout, sweet potato, broccoli, pumpkin with São Jorge cheese, squid, turbot and roast pigeon, all sourced from within Portugal.

It’s a produce-led approach that Mendes hopes to replicate at Adega, the 10-cover basement dining room at Lisboeta. Compared to the formality at Feitoria, Adega will be more easygoing and communal, but don’t expect Mendes to abandon refinement altogether. He may be incorporating traditional dishes like those his grandma cooked, but his version of a samosa could well resemble the one he serves at Bahr at Bairro Alto Hotel: fashioned out of celeriac sheets cooked in spiced milk, it is filled with celeriac curry and topped with flowers. It is an essentially, innovatively Mendes take on a staple of Portuguese café culture.