More men are offering to become allies, but is the move always welcome?

Gregg Lemkau, co-head of investment banking at Goldman Sachs, wants some of his top people to take a good, long break. Specifically, those investment bankers who are about to become fathers.

One of the most senior executives at the Wall Street bank, Mr Lemkau is among a growing band of male leaders on Wall Street to step forward as “allies”.

The move is part of the banking industry’s strategy to improve gender representation across the sector, particularly in the upper echelons.

That is why Goldman has just started offering male employees 20 weeks paid paternity leave. “I’m desperate for a senior executive to do it,” says Mr Lemkau. Even if none come forward, he believes the policy is beneficial because even thinking about it encourages men who “can’t fathom being away for that long” to imagine what female colleagues face when going on maternity leave.

Taking paid time off and impressing the boss may be one of the most pleasant ways a man can become an ally in women’s quest for advancement at work. But male leaders can also emulate figures such as Mr Lemkau, Bank of America’s Bernie Mensah, and Citigroup’s Phil Drury by taking a lead role in their businesses’ attempts to improve gender diversity.

Support from men in leadership roles has a “really critical” role in solving finance’s gender problem, says Carolanne Minashi, UBS’s global head of diversity and inclusion. They still account for most of the people who are in positions of power.

Men can also assist by mentoring and hiring more women — and by modifying their behaviour. “The subtle things go a long way,” says Mr Drury. “The language in the elevator, who do you acknowledge first when you walk into a room — that uncomfortable feeling of being in a group where we were in a minority.”

Catalyst, a global non-profit dedicated to making workplaces “work for women”, has seen an increasing focus on “developing male champions” since it began researching the subject in 2009. Nevertheless, in its latest research 74 per cent of the 178 businessmen surveyed said “a sense that gender issues don’t concern men was a key road­block to their interest in gender equity,” says Sandra Ondraschek-Norris, a vice-president at Catalyst’s Marc (Men Advocating Real Change) programme.

Separate US research from Fairygodboss, an online community for women in the US to share information on employers, pay and culture, found that 56 per cent of men did not step forward as women’s allies because they were “not sure how to help”. Another 24 per cent said there were not enough women in their workplace and 20 per cent said women “don’t seem to want” their assistance.

Seventeen per cent of the men surveyed also said they were afraid of a “backlash” for involving themselves with the gender cause.

Some of those concerns are well-founded.

Ronit Kark, a specialist in leadership who works with the Center for Gender in Organizations at Simmons College, Boston, says that sometimes “women have a feeling ‘men are entering a women’s field’, and talk about feeling men are taking control over gender equity issues that they are trying to promote.”

They may be seen as “forming a men’s club to promote women issues, as patronising, or as trying to gain personal value and credit for these moves. Various women were quite suspicious towards this move,” Prof Kark adds.

Mr Mensah is attuned to this. “I can’t pretend to know how women feel in certain situations,” he says.

“I think being open and honest is absolutely key. Listening to what women say and how they feel. Learning and taking on board constructive feedback and translating it into accountable actions.”

To give men greater insight into the challenges women may face, Citi runs sessions where men experience being in the minority. “Putting yourself into that environment where women are every day is eye opening,” says Mr Drury.

Ms Minashi at UBS says “authenticity” is crucial. “If you behave in a way that’s not congruent with what you said in a public meeting, you’ll be found out pretty quickly,” she says. Another basic error is to turn up at a women’s gathering to give a speech, but fail to stay for the rest of the event.

At Goldman, Mr Lemkau focuses on “tangible change” and tries to follow through on the detail of his commitments. He cites Goldman’s 2018 pledge to have an even male/female split in its analyst intake.

The bank typically receives around 28,000 applications for 500 places. In 2019 Goldman’s human resources team first presented an analyst class that was 48 per cent female. After Mr Lemkau and his colleagues pushed back, HR’s second attempt was 49 per cent female.

The executives held firm. The applicant pool is not split 50/50 between men and women but, as Mr Lemkau puts it, “the pool is so deep you can’t tell me you can’t find 250 capable women you can hire”. The class ended 50 per cent female.

Essay competition: Win a place on an executive MBA programme

The Financial Times is launching its eighth annual Women in Business essay competition in partnership with Henley Business School and the 30% Club, which campaigns to improve women’s representation in boardrooms and at senior management level. The prize is a fully funded place on Henley’s part-time Executive MBA programme, with the winner announced in the FT in the autumn.

The competition is open to women and men who have relevant experience in the workplace either in managing a team, running a project or planning strategy. Entrants should answer this question in no more than 800 words: “How can organisations help women succeed by involving more men in their efforts? What strategies and actions are most and least helpful?”

Entries should be sent to mba@henley.ac.uk by May 18 2020. Terms and conditions can be found at: hly.ac/WiLscholarship 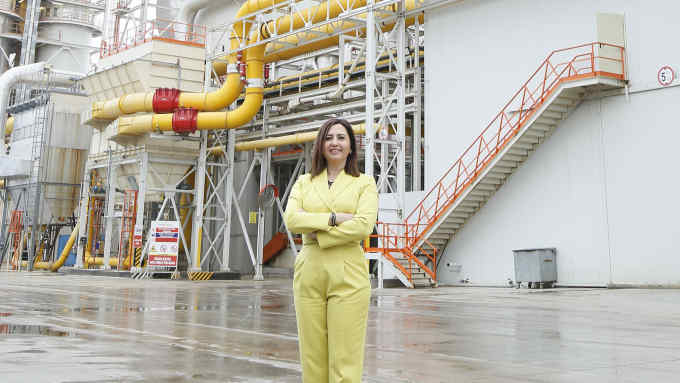