Barely a day goes by without another large company announcing a sustainability drive, encompassing everything from encouraging employees to use less plastic to withdrawing billions in funding from fossil fuel groups.

BlackRock, the world’s largest asset manager, is one of the top names to have announced a sustainable push this year. The group, which has $7tn of assets under management, said last month it would cut from its actively managed portfolios companies that derive a quarter or more of their revenues from thermal coal, double the number of sustainability-focused exchange traded funds it offers and increase its sustainable assets 10-fold to $1tn within a decade.

Many other large financial groups — from pension schemes to hedge funds and banks — have made similar moves over the past year.

TCI, the activist hedge fund run by Christopher Hohn, said in December it would vote against the directors of investee companies who do not improve their pollution disclosure.

Earlier this month ABP, the Netherlands’ biggest pension fund which oversees €456bn in assets, announced plans to cut its exposure to coal miners and companies that produce oil from tar sands. In Asia, Japan’s Government Pension Investment Fund, the world’s largest retirement scheme, has outlined plans to increase the range of sustainable indices that it allocates money to.

The push has created demand for employees with specialist expertise in finance and the environment.

But many argue that while sustainability is, for the most part, an optional specialisation at most organisations, profound changes in the way companies see themselves and understand risk mean it is becoming a skill required for those pursuing traditional roles in business.

“An understanding of sustainability is a fundamental skill for students coming out of business school,” says Kathy Baughman-McLeod, director of the Adrienne Arsht — Rockefeller Foundation Resilience Center at the Atlantic Council, the US think-tank.

“There are multiple signals you will have to understand your companies’ climate risk.”

Sustainability knowhow is not a basic requirement yet but is on its way to becoming one, says Nick Villiers, director for sustainable finance at the University of Cambridge’s Institute for Sustainability Leadership (CISL).

“There’s a recognition there’s a lack of capacity in the industry and this is a business issue about the risks you’re exposed to and the opportunities,” he says.

Crucially, sustainability is being framed as understanding risk as well as being about doing good. In environmental terms, people need to understand if they are making investments that will become stranded assets.

Larry Fink, BlackRock chief executive, says climate change represents a risk to markets unlike any other and that the world “must prepare for a significant reallocation of capital”.

Ms Baughman-McLeod, who was previously head of global environmental and social risk at Bank of America, stresses that risk also encompasses areas such as opioids and e-cigarettes, where consumer attitudes and regulation can change fast.

Chris McHugh, director for the Centre for Sustainable Finance at the London Institute of Banking & Finance, argues that in the financial sector sustainable awareness “is a requirement now and I would think people will have this included in their financial education”.

However, he cautions that it is hard to apply generic knowledge across all roles and that it should be tailored for different jobs.

“For somebody to grasp all of the nuances, it’s tricky,” he says. He highlights the need for some investors to understand sustainability in the context of covenants in loan documents, while a relationship manager at private bank must understand the language around sustainability to help clients.

“The interest from banks has been notable over the past three to four years,” he says, adding that they “are really recognising this is a critical business risk”.

BlackRock says “training and integration programmes are already under way to ensure all of our investment, risk and client professionals are equipped to build expertise”.

However, the degree to which expertise in sustainability is useful varies according to region, says Helen Pradas-Page a principal consultant at Acre, which helps employers recruit for ESG roles.

Video: Coronavirus: how to read the market reaction | Charts that Count

“It’s increasingly part of everyone’s role, but not yet required across all functions,” she says of the situation in Europe. “However, it is a key differentiator that is likely to positively influence a decision for career advancement.”

For roles in areas such as managing a supply chain, procurement and human resources, having some knowledge of sustainability issues “will be a differentiating factor” when it comes to promotion, she suggests.

“We’re on the tipping point of sustainability being required across traditional business sector careers as sustainability is thematic [and connected to issues such as] climate change, diversity and inclusion [and] human rights in your supply chain — it permeates all functions,” Ms Pradas-Page says.

Although some US-based groups like BlackRock are keen to be seen to be proactive on sustainability, there is less overall demand for that kind of expertise on the other side of the Atlantic, she notes. “There is still a long way to go before sustainability specialists are given adequate headcount, let alone become embedded across a business in the US.”

Get alerts on Impact investing when a new story is published 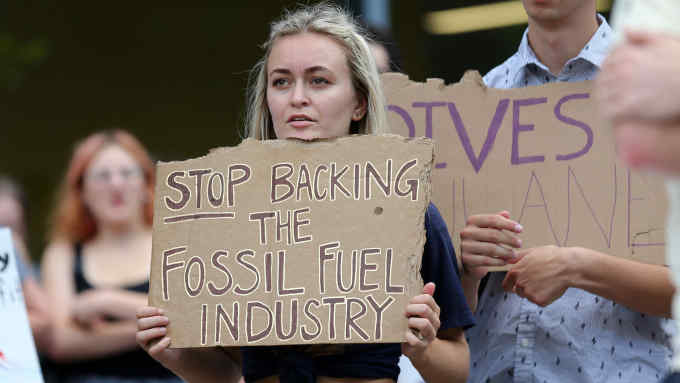