All-inclusive inns, guesthouses and micro-hotel chains to know for Pride month and beyond

Salt is the word for micro-stays in the US

From macro to micro: in a nutshell, it’s the story, and the ethos, of Salt Hotels, the tiny collection of inns founded in 2014 by hoteliers and partners David Bowd and Kevin O’Shea – former executives at André Balazs hotels and the Starwood and Morgans Group respectively – who left the hustle and glamour of their big posts to create hotels where people are, as Bowd says, “encouraged to be themselves” and live “honest, thoughtful experiences”. The collection currently clocks in with eight properties: two in Cape Cod’s Provincetown, and one each in upstate New York, Nantucket, and Miami Beach; there are a New Jersey Shore hotel and a private members’ club in Hollywood, The Aster, opening this summer.

All the design and operations nous gathered while creating some of America’s chicest boutique hotels is brought to bear on Salt’s small, genuinely home-like spaces. Start at Salt House Inn or Eben House in Provincetown; make your way down to Hutton Brickyards on the Hudson River; finish up at the (adults-only) Greystone, with its rooftop pool and private club on a central stretch of Miami Beach. From $495, salthotels.com

Tuscany’s Monte Argentario peninsula is perennially in demand (thanks in great part to the chef-of-magic talents of Marie-Louise Sciò, she of Il Pellicano fame). Orbetello, the 15th-century town built on the slender lagoon isthmus that connects the Argentario to the mainland, is familiar mostly (if it is at all) as a pass-through on the way to the peninsula’s innumerable inlets, forest walking paths, and glamour scene. But Orbetello merits more attention: it harbours a charming centro storico, a quirky but very good weekend antiques market – and Casa Iris, the three-suite B&B owned by former restaurant director Matthew Adams and stylist James Valeri, both previously based in New York.

The Casa Iris palazzo sits in the heart of the island and the town, offering both a level of service and gorgeousness of public spaces that belie the operation’s modest size. Valeri and Adams clearly share an eye for a good midcentury find, and one for material detail as well (note the meticulously mottled stucco finish on the walls, an artisan technique known as scialbo). They also know Orbetello, and the peninsula, like the proverbial back of their hand, from the best aperitivo spots to that hidden textiles shop, so the roster of recommendations keeps guests busy, and happy. From €190, casairisorbetello.com

From beach to city central

“I believe in niche hotels but I’m not sure I believe in gay hotels. When John Smith calls us from London, I don’t know and don’t ask if he’s arriving with Barbara or with Brandon.” So said Leon Avigad, who co-founded Brown Hotels with his husband Nitzan Perry in 2010. That inclusive perspective hasn’t kept Avigad and Perry’s collection of some 30 hotels across Israel, Greece and Croatia – many of them scattered in prime locations in Athens and Tel Aviv – from topping worldwide lists of addresses the LGBTQ+ community flocks to, and loves. The hotels hit several sweet spots at once: style, affordability, inclusive programming and excellent connectedness to local communities.

At Brown Beach House in Tel Aviv, a block from the promenade and a 10-minute walk from Carmel Market, the rooms are clad in ebullient monochrome carpets. There are sister locations in Chalkida and Eretria, near Athens, and one in Trogir, west of Split in Croatia (with its own beach club). The newest is the Theodor, in a listed 1935 Brutalist building on the corner of Tel Aviv’s Herzl Street and Rothschild Boulevard – about as central as it gets in this 24-hour city, and ideal for Barbaras and Brandons of any flag. From about £188, brownhotels.com

Sunsets and style in Cape Winelands

Partners Marc-Ludolf von Schmarsow and James Jayasundera were already a hotel dream team before they were actual hoteliers: the former an established architect and interior designer, the latter a respected travel designer specialising in southeast Asia, Sri Lanka (whence his heritage) and India. Together they were renowned among their friends for their incredible taste and blowout dinner parties. When they purchased 7 Koppies, a small farm on a hill overlooking the junction of Stellenbosch and Franschhoek in South Africa’s Cape Winelands, their initial intention was to use it as a second home; but given their innate sociability and roster of world-travelling acquaintances, the three-room, two-suite, one-cottage property quickly morphed into one of the Western Cape’s most sought-after guesthouses. 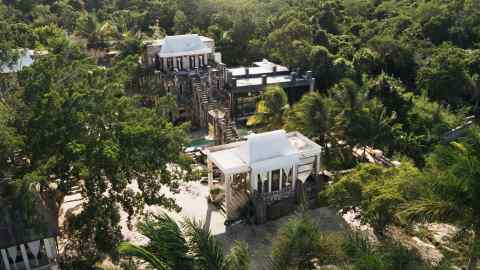 Its 50 private hectares of fynbos, 25m-long swimming pool, and skilled in-house chefs have earned it repeat guests from all over. Many come for the cover-worthy interiors, others to explore the fine wineries and world-class restaurants in the surrounding towns; most find their way back by late afternoon to enjoy 7 Koppies’s reliably gob-smacking sunsets. From about £185, 7koppies.co.za