Are art collectors embracing online viewing rooms - or getting tired of them?

As Art Basel prepares to launch its 20th-century-focused OVR:20c, gallerists and buyers share their views

When Art Basel Hong Kong launched its online viewing rooms (OVRs) in March amid the spread of Covid-19, it felt like a brave new world for galleries, collectors and art world players. The digital platform had been in development for several months but was fast-tracked after the Hong Kong fair was cancelled in February due to the outbreak in China.

The Hong Kong OVR site, free of charge for galleries, offered basic options to view by artist, gallery, medium and price range (a zoom-in option to view works in close-up was also available). Fast forward seven months and collectors have become accustomed to the new digital landscape, dipping into OVRs instead of browsing fair aisles in real life. When the latest rooms launch next week on the Art Basel website and app, 100 galleries will show works on OVR:20c, a platform dedicated to works created during the 20th century.

These virtual selling spaces are rapidly becoming more sophisticated. “OVR:2020 [the previous iteration] and OVR:20c introduced a new live-chat feature for galleries to give presentations and respond to questions submitted by chat,” says an Art Basel spokeswoman. Other technical upgrades include improved filtering options and more fluid, direct navigation from room to room. Unlike with the free Hong Kong site, participating galleries must now pay a flat fee of CHF 5,000 ($5,530). The next iteration, OVR: Miami Beach, is scheduled to go live December 2-6.

OVR:20c includes a wealth of important works such as six double-sided watercolour drawings by the outsider artist Henry Darger (ranging from $200,000 to $700,000) at Andrew Edlin Gallery of New York. London’s Richard Saltoun Gallery will show pieces by the late UK minimalist artist Bob Law made between the late 1950s and 1980s, with an upper price point of $600,000. “We’ve made good sales online, and used the digital fairs as a way to engage with existing clients,” Saltoun says.

But after months spent perusing and navigating online, are collectors embracing or rejecting the new digital experiences? Hubert Bonnet, founder of the non-profit Fondation CAB and collector of 20th-century art by major figures including Donald Judd and Alexander Calder, will “definitely have a look” at OVR:20c, he says.

Thirtysomething, New York-based collector Megan Green will also survey the OVR:20c rooms. “Frieze, Basel, and Galleryplatform.la have done a good job pioneering this new medium,” she says. “I try to browse all of the online viewing rooms for all the major fairs as soon as I have access. I have attended many Art Basel Miamis and Art Basel in Switzerland a few times; Art Basel is a brand that I trust for connoisseurship.”

Art world innovators say that there is still plenty of room for improvement, however. The Turin-born, London-based collector Eugenio Re Rebaudengo launched Artuner in 2013, producing selling exhibitions of contemporary art online and through international pop-up shows. His collection comprises predominantly works of the 21st century, including by artists such as Michael Armitage and Avery Singer.

“A very important element at this stage is the user experience — how easy is it for people to navigate the platform and find what they want without getting frustrated or bored? Overall, I find the degree of innovation and creativity still pretty limited. For example, I imagined there would have been many more 3D virtual galleries experiences,” he says.

Frieze’s viewing rooms, which went live in May, were accompanied by an augmented reality (AR) app that enabled viewers to visualise works within home settings. The same month, the Vortic app launched, giving galleries the opportunity to present works and exhibitions in virtual reality and AR (more than 40 galleries have since signed up).

Transactions have also been taking place via galleries’ own virtual platforms. David Zwirner was the first commercial gallery to introduce an online viewing room in 2017. Elena Soboleva, director of online sales at Zwirner, told Apollo magazine that “for years, we regularly sold works via PDFs and JPEGs, and saw an online viewing room as a natural evolution”; its recent online Studio series, dedicated to seven artists including Carol Bove, made $17m in total.

There is a sense, though, that virtual fair fatigue is setting in. Nazy Vassegh, founder of Eye of the Collector art fair, observes: “From speaking to collectors, the enthusiasm for some OVRs is dwindling. I think we still need moments of discovery in the art world, be they online or live. The auction world seems to have successfully transitioned into a global multi-centre livestream scenario.”

Vassegh plans to hold a second digital edition of Eye of the Collector early next year where works will once again be presented as a “curated in-situ show”. She gleaned some significant findings from the first online iteration held in May, highlighting the “surprising” range in prices of works sold (€8,000 to €500,000). “The highest-priced work was from the 20th century; perhaps it’s easier to acquire such works without physically seeing them,” she adds.

Surprisingly, many collectors say they will buy a work online without seeing it in person. Florence-based collector Christian Levett is candid about how his buying habits have been transformed. “Normally, there would be no chance of me buying a work over, say, €200,000 without me flying somewhere to see it. However, this year I have broken that rule many times and actually added a lot to my 20th-century female abstraction collection, because there’s been a uniquely large number of great opportunities to buy works by Elaine de Kooning, Grace Hartigan and Hedda Sterne, among others.”

Most of the works were bought from the US, which he could not visit during the pandemic. “It’s mostly worked out very well, although I have to say there have been a couple that I wouldn’t have bought if I’d seen them live first — it’s worth paying for that plane ticket!” Levett notes, adding that he has sourced most of the works through the Artsy app.

Re Rebaudengo says he has been acquiring works via digital images for a “very long time, and I’m very comfortable with that”. By contrast, US collector Carole Server has always balked at buying works without seeing them in person. “However, necessity is the mother of invention, and we have participated in online art fairs or exhibitions, and have bought three works this way,” she says.

But is this digital scramble a turning point? Re Rebaudengo does not consider the OVRs revolutionary. “We can look at them as an incremental innovation,” he says. “They may change collectors’ behaviour, and hopefully will become a channel to expand significantly the number of collectors, making art more accessible and the acquisition experience more transparent and less intimidating.” He believes that in future the art world will depend more on hybrid physical-digital models.

Crucially, OVRs help dealers to acquire data. Artnet columnist Tim Schneider has written that “nameless and faceless information” is being collated by galleries and fairs, helping them to identify trends (the number of page views per room and artwork are, for instance, useful nuggets of information).

Nevertheless, Green likes the way digital platforms have led to more transparency (galleries often keep prices confidential at fairs, guarding them like state secrets). “Being able to see prices transparently is what I value the most,” she says. Most OVRs give price ranges rather than exact prices, and these can be broad — $500,000 to $1m, for instance.

“Digital is an addictive experience and these platforms have been forced to become better because of the pandemic. They give collectors access to places they can’t be, more research tools, and transparent pricing,” Green says. “All of those elements are amplified online and help collectors be matched with their perfect pieces. However, I don’t believe anything will ever replace the act of seeing a piece of art in person.”

She sees this current pivot to digital as an inflection point rather than a major step. “I love the physicality of art and I also miss the social element of developing dialogues with artists and gallerists,” she concludes. Bonnet agrees: “Digital is ubiquitous in our everyday lives. For me the physical interaction is better and more pleasant.”

Many collectors are becoming decidedly nostalgic about traditional art fairs as arenas for buying, gossiping and meeting key people. Levett says: “I think the major fairs will come back and be absolutely as successful as they were before. It’s just a question of whether that’s next year or, more likely, 2022. Nothing replaces walking around a fair and seeing something live along with works that are more striking in person than they will ever be on a computer screen. And they’re social and fun!” 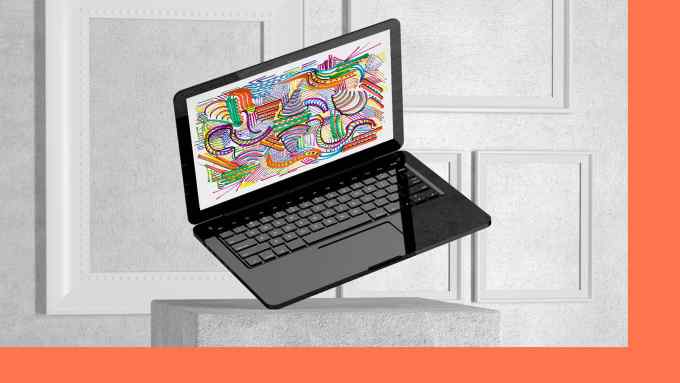