The case for déjà vu

Seen it all before? In a world of uncertainty, take comfort in the familiar

The ceaseless, irascible declaration of every generation is that they – or, indeed, we – have seen it all before. That nothing is different, nothing is interesting, nothing is new. Ironically, it’s an old story in and of itself. But, as of 2022, the ouroboros that is popular culture is, perhaps, swallowing more of its own tail than ever before. It isn’t just that our fashion is filled with revivalism – that’s been par for the course for more than 30 years. It’s that music now more than ever consists of cover versions and samples: Beyoncé’s album Renaissance features prominent, instantly recognisable samples on 10 of its 16 tracks. The film industry is dominated by remakes, franchised sequels and prequels, and reinterpretations of real-life stories, the latter also looming over television: The Crown, The Dropout, Inventing Anna. The best actor and actress winners at this year’s Academy Awards both received their Oscars for starring roles in biopics – essentially, reruns of real-life, names and faces we already know.

We are living in an age of déjà vu.

But what if, rather than contempt, today familiarity breeds contentment? There’s a degree of satisfaction in the known, and the notion of familiarity can take many forms. A fashionable retreat into history can be expressed not only through retrospective shapes and forms but also through an enthusiasm for vintage – wearing pieces of history from a resale market that, despite the production of more than 100 billion new items of clothing each year, continues to grow in popularity and price. And the new stuff looks like the old stuff. For the AW22 menswear season, designers looked back to the power of the suit, a recognisable symbol of masculinity and, indeed, expense. Prada, Gucci and Dior based collections around the two‑piece: at Dior in particular, Kim Jones mined a rich seam of historical referencing, borrowing from the brand’s midcentury haute couture heritage and embroideries, like a remix of fashion’s greatest hits.

Ever since Karl Lagerfeld took the reins of Chanel in 1983, designers have been splicing up emblems and signifiers to cross-pollinate history into fresh fashion, anchoring ideas in a storied past to increase cultural cachet. Yet today, the idea of the familiar can also encompass stuff we see every day, just recontextualised. That includes notions such as logo hacking – where an existing, near-universally recognised logo is reconfigured or reworded – or the two-handed, dual-branded designer collaborations that have become increasingly popular, the most extreme example being the hook-up between Gucci and Balenciaga last autumn, mixing together the signature shapes and logos of both.

In the 21st century, there’s nothing quite so ubiquitous as sportswear

There’s a familiarity there, because we recognise part of the symbol we’re looking at, even if the lettering seems a little alien or different. Martine Rose, a London-based designer who is mooted, at time of writing, as a possible successor to the late Virgil Abloh at Louis Vuitton, has made a neat line of logo referencing. Her forename has appeared in logotypes resembling everything from the olde worlde Carling Black Label trademark across a football kit to a Lurex sweater emblazoned with the curvilinear font of the Durex brand. They elicit a sly nod, a wink – we’re in on the joke. And then, maybe, people buy them.

Rose has been playing with this stuff for years, and has had a widespread influence: when she was consulting for Balenciaga back in 2017, the label debuted its take on the logo of 2016 Democratic candidate Bernie Sanders. “I love turning logos around, which I do because I think it’s funny,” says Demna, Balenciaga’s creative director. “It’s also questioning things.” Things like true value and real meaning, blurring our perceptions of what products someone is hawking, playing with ideas of luxury. Aligning your goods with condoms isn’t something most designers would do, nor is the glorious confusion caused by two fashion houses exchanging their trademarks – a Balenciaga-branded bag in a Gucci window, and vice versa. These rip-offs (maybe an ugly term, but a view I hope both Rose and Demna would agree with) could well be the genesis of collaborations such as Calvin Klein’s with London-based skateboarding and clothing brand Palace, whose name is written in the typeface of the mid-’90s CK One perfume, a giant “K” superimposed after its own “C”.

The French philosopher Jean Baudrillard asserted that “we have entered a deceptive world in which an entire culture labours assiduously at its counterfeit”. He name-checked the importance of decoys in the military and placebos in medicine – but oddly, not fashion, which has been populated with fakes for well over a century; there’s a multibillion-pound industry dedicated to creating them, and an increasingly commensurate resource dedicated to stamping them out. Here again, the power of the fake relies on familiarity: people dupe symbols of status such as the Louis Vuitton monogram, the Burberry check and Dior’s logo print. As Balenciaga’s Demna observes: “Counterfeit can also produce creativity, in some strange, ironic way.”

Fashion’s revivalism has sped up – over the past few years, designers have increasingly used phrases such as “the wardrobe” or “the street”, mentioning “classics” as they talk. What they mean is that, rather than harking back to clothing worn through history, they are riffing on the familiar and everyday. Forget trench coats and suits – in the 21st century, there’s nothing quite so ubiquitous as sportswear, which is now amalgamated into designers’ collections like never before. And the sportswear label of our moment is Adidas, whose logo has been cropping up in designer collections across the past few years. Prada, Balenciaga and Gucci, as well as brands such as Wales Bonner, have all collaborated with the German sportswear company. There is a touch of nostalgia in these Adidas iterations, with Balenciaga’s oversized proportions and Prada’s slick minimalism both recalling hip-hop videos of the late ’90s, and more than a touch of ’70s in Wales Bonner’s sludgy palette and graphic patterned sportswear – think John McEnroe via Chas Tenenbaum’s tracksuit in Wes Anderson’s 2001 The Royal Tenenbaums. The result, sometimes, isn’t even that sporty but retains the all-important brand identity: all the collaborations utilise Adidas’s protected brand mark, the familiar trio of stripes seen so many times on every street, from Mayfair to Munich.

On the one hand, it marks a refreshing, long-overdue realisation that most people don’t walk around in silk faille opera capes. But it’s also akin to appropriation art, where figures like the American Richard Prince re-photograph Marlboro cigarette advertising or rework pulpy-fiction book covers into multimillion-pound artworks, to much critical conjecture.

The power of familiarity has economic value, as proven by Hollywood’s reliance on the franchise and remake. The fashion equivalent is the revival of dormant luxury houses, sometimes colloquially referred to as “sleeping beauties”, whereby brands are rebooted under a completely different creative, and often financial, leadership. Luvanis, a Luxembourg-based private investment company, is a specialist in this. It has revived, with varying degrees of success, the couture house of Vionnet and the Parisian trunk-maker Moynat (now owned by LVMH). It’s easy to see the attraction: there’s less risk than there might be in investing in unknown, emerging designer names, and many people will be at least partially familiar with these historic houses, ready to be reminded again through a new collection, a fresh advertising campaign or a perfume. Luvanis’s business model is to assemble the intellectual property rights and trademarks to everything, from licensing to fragrance titles, auctioning them off at tidy profits to the highest bidder. As Arnaud de Lummen, managing director of Luvanis, once told me in an interview: “The culture of the past is currently more important than creating a new future.”

Robert Armstrong
The men who stick to a strict style diet 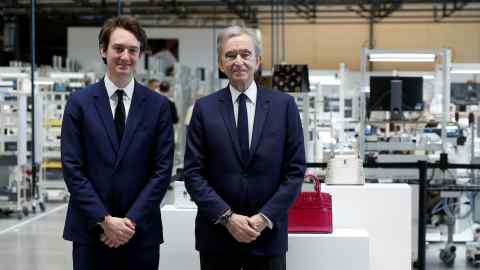 It may sound a touch nihilistic, but that idea is especially prevalent in times of uncertainty, when the future itself seems jeopardised. In the late ’30s, as political and economic unrest boiled, couturiers threw back to the safer climes of the 19th century, reviving bustles and crinolines. Hollywood proposed idealistic historic epics around the lives of Queen Christina, Catherine the Great and Marie Antoinette; even modernism in interiors was eschewed in favour of styles emulating the scrolls and turned legs of Regency and 18th-century tastes. Maybe that underscores one reason that so much today is familiar – it’s the antidote to the unknown.

It also chimes with the way we consume information now. In the era of TikTok and viral videos, impact has to be instantaneous – there’s no time to dissect, deliberate, digest. Attention must be grabbed immediately.

There is, however, another way of looking at this, especially when framed within fashion. When so many labels have pushed so far and hard to be innovative and outrageous, designing – and arguably over-designing – their clothes to near unwearability, there’s something revolutionary about proposing a simple sweater, a pair of trousers or a nice blue-collar shirt. Alessandro Michele said he based his February Gucci show around the suit because it was the most unfashionable thing he could do. It is refreshing that familiar things may not be so familiar any more. Maybe that’s where this current fascination with them lies. When describing her SS22 Miu Miu show, Miuccia Prada stated “there is no pointless invention, no fashion”. She wasn’t trying to invent anything new.