Carole Bamford and 20 years of Daylesford

As the pioneering farm celebrates its anniversary, the force behind it gives an exclusive interview

It’s a sunny day at Daylesford Organic Farm in Gloucestershire and founder Carole Bamford is surveying the perennials with Jez Taylor, head of the market garden. Bounding between them are her dogs – two blond Labradors, Cassie and Olive, and a pair of Shih Tzus, Tequila and Margarita. “I had a few die recently,” she says of what used to be a septet of Shih Tzus. “Mimosa and Cosmopolitan died in 2021. Bellini, who I had for 17 years, passed away in March. Those are his granddaughters. Spice died in June.” Absent today and rounding off the list is Sugar. “They’ve all got their own [foibles].”

Now 76, Bamford is wearing the latest pieces from her eponymous clothing line: a white organic-cotton shirt and a waterproof khaki organic-cotton skirt: “So I can sit on a log in the middle of winter and not get my bottom wet,” she says of something she does quite often while walking the estate where she has lived for 30 years.

Her official title is Lady Bamford. Or Baroness Bamford, after her husband Anthony Bamford, the chairman of JCB, was made a life peer in 2013 (having already been knighted) and took the formal title of Baron Bamford of Daylesford in the County of Gloucestershire and Wootton in the County of Staffordshire (their other farm estate). To staff at Daylesford, whose farm shop and café turns 20 this year, she is known as “Lady B”. But don’t call her Lady Bamford in print, she pleads. It isn’t the only honorific she resists. Shy by her own admission, she speaks softly and shrugs off big titles or big claims that might draw too much attention. With its requisite focus on her, this interview to mark the 20th anniversary of Daylesford often makes her squirm. Settled in the Chelsea Garden Room with a fortifying glass of sparkling rosé, she points to a stack of bracelets on her wrist. “I believe in the power of crystals,” she says. “I buy these in India. They bring calm. Today, I thought, I want to be calm.”

What I do is better than doing nothing. Lots of people that live my life do nothing

Since the farm shop and café opened in 2002, the Daylesford flagship location has grown to include a cookery school, wellness spa, Michelin Green-starred restaurant, bakery and patisserie, creamery, smokehouse and fermentery. Other properties include the nearby pubs The Wild Rabbit and The Fox, a string of rental cottages and four more farm shops with cafés in London. A new website just launched to meet the demand for Daylesford produce, which soared during the pandemic. Among Daylesford devotees is Boris Johnson, who reportedly had about £12,500 worth of Daylesford food delivered to Downing Street during the pandemic and this July hosted his wedding bash at Daylesford House (Lord Bamford is a Tory donor). In addition to Daylesford, Carole Bamford also founded her own clothing line (launched in 2007), which uses natural fibres, and bath, body and homeware collections that promote wellbeing. They are sold at Bamford stores in Mayfair, Bicester, Brompton Cross, Seoul and Tokyo and more than 75 other global stockists. All of which underpin Daylesford’s philosophy of “looking after the bigger picture of the world and the smaller picture of ourselves”.

Given the size of the operations – Daylesford employs 795 staff across the business with an annual turnover to March 2022 of £49.5mn – you would think words like “entrepreneur” or “businesswoman” would be fitting titles for Bamford. At Daylesford she basically originated the concept of luxury organic retail and the Bamford brand has been pioneering in sustainable fashion and organic beauty; Bamford herself has even been called the “British Ralph Lauren”. And yet: “I’m not a businessperson,” she counters. “I don’t identify as that. And when [people] talk about a brand, I never wanted a brand.” Her preferred title is organic farmer. “I identify with having a belief,” she says. “If you believe in something, things happen.”

The farm shop was originally conceived to keep her occupied. “I was at the stage when my children [Alice, now 46, Jo, 44, and George, 41] were leaving home. Anthony was working hard. I thought, what am I going to do, apart from farming? I’ve got to be busy.” She asked her husband if she could turn a barn on the estate into a shop. Then she panicked: “[I was convinced] no one would come. I always have an idea. Then a wobble.” People came in busloads, and they never stopped.

The story of Daylesford farm goes back even further. As Bamford tells it, it was 1976, she was in the garden at Wootton with baby Alice and her roses were wilting. It turned out to be from pesticides being sprayed on a neighbouring farm. Visiting the Royal Agricultural Show shortly afterwards, she got talking to a farmer who convinced her organic was the future. When she suggested that Wootton convert, her husband called her “barmy”. Others laughed at her. “They thought I was a rich girl,” she says. “Even the farm manager at Staffordshire said it wasn’t commercially viable. But I’m pretty determined.” For her it boils down to the soil: “If the soil is healthy, the animals and vegetables are healthy. We eat them both. We are healthy.”

It took seven years for the farm at Wootton to become organic. The farm at Daylesford, purchased in 1988, took another three years. Now Daylesford is among the most innovative in the country, a leader in everything from its rare-breed cattle programme to its agroforestry and wetlands projects. The push to even greater sustainability continues across the business.

“Fashion is the biggest polluter of the soil ever – we have to address that,” says Bamford, talking about her latest clothing collection, merino knitwear that uses wool grown, sheared, spun and knitted in the UK. From sheep to shop, the wool travels 639 miles. “This has the lowest carbon footprint of any garment,” she says. “It made no money but I am so proud of it: it is setting boundaries. In 10 years’ time, [more] people will be doing this.”

Her other preoccupations at Daylesford include attaining B Corp status, while everything from dog snacks to vertical farming with hydroponics is in the pipeline. At one point she describes her role at Daylesford as “the visionary”, though she later baulks at this term and suggests instead, “I push people.” She says: “I go around and think, God, did I do all this? Until I talk to someone like you, I don’t take it in. I don’t have time. I’m on to the next thing. I’m a driven person. I always have been.” Where that drive came from she won’t say (“that’s personal”) but she notes how driven people are often shaped by childhood events: “They’ve either lost a parent [or] had to rely on themselves at a very early age. At 16 I thought, it’s up to me.”

Of Bamford’s years before she married in 1974, little is known except that she was a grammar-school girl from Nottingham who became a flight attendant. “[When] you haven’t got anyone to lean on, it makes you self-reliant. That’s funny me saying that because people see me as a very lucky girl. And I am. I’ve got the support of my husband. Still, I didn’t need to do anything. But I did.”

At 20, she went to India on the trail of Swami Veda. She got into meditation. It had a profound effect. Now she begins each day – after reading the Racing Post (“I love horses”) – with an hour of breathwork, yoga and meditation. India, she says, is her spiritual home: “There are three things that are important in my life. One is family. Two is hard work. Three is spirituality. Indian people have all of those things.” In 2019, she launched Nila House in Jaipur, a centre that aims to preserve traditional Indian crafts such as indigo dyeing through collections of clothing and homeware.

It’s not hard to draw parallels between her approach at Daylesford and her spiritual outlook. “I am always searching for something more,” she says. “I believe in universal energy. I believe in instinct. What’s your first impression? You can be bogged down by data, clever people. What do you really feel? What moves you?” If the success of Daylesford proves anything, it’s that her instincts have largely been right. What was ahead of the curve when Daylesford started – organic food, wellbeing, holistic living – is now mainstream.

Taylor calls Daylesford a “blueprint” for farms to become food hubs with shops, restaurants and cottages that support and feed off the farm and make organic farming possible. “I often refer to [Lady Bamford] as a patron,” he says. “Creating this farm costs money. It needs somebody with money to get it going. She comes from a business-minded family. They know if you invest you will get a return eventually. Daylesford has so many elements, it’s become what we talk about in organic farming: multiple crops, more resilience. This is a resilient business.” When the pandemic forced much of Daylesford to close, food and web sales kept the business going.

Bamford is heartened that the conversation around organic food has moved on in the past 20 years. At the beginning, she downplayed the organic side of the business because organic was considered overpriced. On the question of cost now, she is clear-sighted: “Our chickens are £15 to £18 each. At the supermarket you can buy a chicken for £4 or £5. [But better to] pay the real price for food now than pay it later in the doctor’s surgery. We have to eat less meat and eat better.” The important thing is “getting people on the road. If people say, ‘How do we start eating organically?’, I say with just one [product]. Milk. Eat locally if you can’t eat organic. Buy in season. Be a conscious shopper. 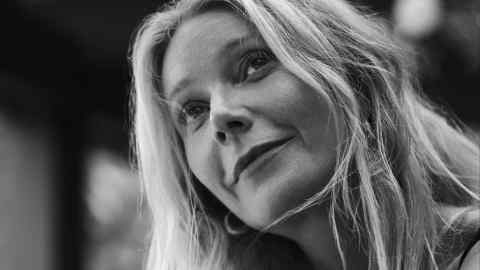 “Nobody’s perfect,” she adds. And that includes her. Asked how she reconciles a jet-setting lifestyle with efforts to be sustainable, she concedes: “There is no answer to that. I’m guilty. I fly in a helicopter. I fly around the world. Journalists will chop my head off. But [what I do is] better than doing nothing. Lots of people that live my life do nothing. I used to feel guilty. I don’t any more.” What changed? “I grew a thicker skin.”

Time is up. I ask what the past 20 years of Daylesford have meant. “A lot of hard work,” she says. “But I work harder now. There is always more to do. Always more to learn.” And with that, she’s off, on to the next thing.