‘I want to see it, I want to touch it’: the new alchemist at Louis Vuitton

In her first interview since taking over jewellery at the luxury house, Francesca Amfitheatrof talks about the adventure ahead and the artists who inspire her

Francesca Amfitheatrof, a jewellery designer with the face of a movie star and a voice like good coffee, is in the surprisingly officey office that is her current base in the Louis Vuitton building close to where the Pont Neuf crosses the Seine. She is the new artistic director of watches and jewellery at the French luxury house, but given her background as a bench jeweller who gets her hands dirty — raising silver with hefty hammers, making her own gold alloys — one might imagine her in something of a more alchemical working environment.

The only clue that this neutral box in the middle of a long beige corridor is where she summons up objects of beauty rather than calculates budgets, are the two walls covered with craft paper to hide the inspiration for a collection in progress. Then the eye is drawn to the magpie’s trove on the desk, the glinting work itself, a tray of rather edible looking chevalier or signet rings stamped with globes of malachite and black onyx or glittering with diamond pavé, sturdy gold bangles studded with the same precious stones, and slithering chunky chains and charms marked with Louis Vuitton’s signature flower or blossom in little gold frames.

Amfitheatrof, 50, is the mistress of making jewellery you want to ooh over, touch and, frankly, conceal in your hand and make off with down the nearest long, beige corridor. The scope of her new job will see her launch high jewellery in July and watches further down the line, but this collection, B Blossom, available now, is her first for the house since she was appointed after a four-year stint as the first female design director at Tiffany & Co.

B Blossom is her reinterpretation of Vuitton’s longstanding fine jewellery collection, recognisable for its pendants decorated with the blossom icon designed by Georges-Louis Vuitton in 1896. “I felt you could make it more modern and young and impactful and make the pieces really three-dimensional,” she says as she passes over chunky rings and clanking bangles. “I took the chevalier, which is such a part of French history, and turned it into a bead, so it looks like it’s floating. And it’s all quite big, I like big jewellery. Here, try this on. This is a proper piece of jewellery. You can feel it, right?”

The hefty gold bangle with its onyx stamps closes with a satisfying snap. “It’s been about making it much more sculptural, more impactful and closer to the Vuitton woman. She’s not a shy wallflower. She’s a strong adventurous woman with a free spirit.”

She could be describing herself. Amfitheatrof is a fitting appointment for Vuitton, a house with its roots in luggage and travel. A true citizen of the world, she was born in Tokyo to a Russian father, who was bureau chief of Time magazine, and an Italian mother who worked for Valentino. Her grandfather was the composer Daniele Amfitheatrof. She grew up on the banks of the Hudson outside New York and later in Rome. When her parents went back to Moscow in the 1980s, she went to boarding school at Cobham Hall in Kent.

“It makes you extremely open minded,” she says of having called so many different countries home. “A lot of people make sweeping statements. Ah, in America everyone’s like this, in China they’re like that and I tend to not do that. I’d rather hold out and see for myself.”

Amfitheatrof trained at London’s Chelsea School of Art and Central Saint Martins before going to the RCA where she studied with Giovanni Corvaja, one of the best goldsmiths in the world. “I’m a metalsmith. I’ve always been a three-dimensional person but I really love gold. I love the malleability of it, the possibility.” She started making her own alloys and learnt to make elastic gold and blue gold. “The default is 18k gold because it’s a little bit like wine — you go to a restaurant and you’ve got your typical French and Italian wines because they’re the marketed and acceptable ones, but there are so many other possibilities. It’s like that with gold.” She followed this with a stint with a master silversmith in Padua. “It means I know how to make everything and I’m super-happy about that. I can go into any atelier, any factory and sit with jewellers and know what they’re doing. Having a depth to anything you do is a value.”

Having lived and worked in Europe for most of her rather dumbfounding career — she has seamlessly moved between design and curation, working for Asprey & Garrard, consulting and summoning up the odd cult piece for Alessi and Wedgwood, curating shows for Damien Hirst and the Chapman brothers and launching the Gucci Museo in Florence — she moved to New York for six years with the Tiffany job. She now splits her time between New York, the rural home in Connecticut she shares with her husband and two children, and Paris. “The sense of adventure of the house is super-important to me,” she says of Louis Vuitton’s leitmotif. “It’s how I grew up and how I live my life so that really resonates.”

She certainly looks like an ambassador for a luxury fashion house. Today she wears knee-length black shorts over outsized fishnet tights, an Animalia printed silk blouse in black and white and an ivory blazer with a stern shoulder. “Vuitton, Vuitton, Vuitton,” she says of the outfit, and, pointing down to her mustard yellow boots, “and Céline!”

“Fashion really feeds me,” she admits. “There are designers who are like family to me. I go to their shows. They support me, I support them. I’ve been a huge fan of Nicolas Ghesquière from always,” she says of Vuitton’s artistic director of womenswear since 2013. “I have pieces of his from Callaghan when he was just starting out. I love the silhouette, I love the fact that he drums to his own beat and this notion of the Louis Vuitton woman having her own . . . sound in a way, her own music is something I’m attracted to. I always think of her stomping around with the big boots and a suitcase and I felt like the jewellery collection could have that.”

With Ghesquière helming womenswear and Virgil Abloh menswear, Amfitheatrof provides a female point of view alongside two prominent male designers. She feels it’s important for the jewellery to be designed by a woman. “I find that you can . . . tell when it’s designed by men,” she says, clearly searching for diplomacy. “Women have a different sensibility. I don’t think it’s all about value, carat, size. I also think how it feels on the body is treated differently. You can be a bit more daring as a woman. Sometimes men are a little more traditional. My love of fashion translated into jewellery is important as I tend to look at how you wear it and style it together. I like seeing where fashion’s going and how jewellery sits with it, what the conversation is.”

And what is the conversation? “Well, we’ve gone through a phase where it’s been super-decorative, right?” she says. “A lot of accessories designers became fashion designers and they took those sensibilities into clothing. But when you have a designer like Nicolas you have a lot of attitude and I think it’s really interesting to have jewellery that has that attitude. So I’m creating pieces that not only stand the test of time but even in one little piece hold a lot of attitude.”

While the ear may have been the fashionable zone for some time it’s not Amfitheatrof’s particular focus (though she is wearing a gold drop earring, left lobe, today). “I design a lot of bracelets and rings because we’re looking at our hands all the time. That area gives you pleasure. Earrings and necklaces are more for other people, right? But I want to see it, I want to touch it, so I think I tend to design more for the person wearing it.”

When she started her label in the minimalist 1990s, no one in fashion was really wearing jewellery. But her Tag bracelet — a plastic chain with a sterling silver clasp that she recently relaunched with her new brand, Thief & Heist — became a cult item. She worked for Rifat Ozbek, Marni, Balenciaga and both Fendi and Chanel with the late Karl Lagerfeld who was “a big fan”. “He brought me to Fendi and then Chanel and I remember him asking, ‘Francesca are you sure you can do both? Are you sure?’ And I was like, ‘Yes! I’m sure!’ And I did,” she laughs.

Lagerfeld, along with Giorgio Armani, bought up most of the silver vases Amfitheatrof made for her first jewellery show at Jay Jopling’s White Cube gallery. “The funny thing is they’re still in his house now,” she tells me. “Karl went through phases in his décor where he’d be all about Swedish Gustavian and then change to something completely different, but he always kept the vases.”

Her circle back then was a rowdy mash-up of the YBAs, musicians like Blur’s, the late designer Alexander (Lee) McQueen, milliner Philip Treacy. “Nobody had any money. Back then I was making a ring [in exchange] for a painting or a piece of clothing,” she remembers. She must marvel at how influential and successful her old gang has been. “I know! Look at Tracey Emin now. And if you think what Jay did . . . I met him when he was selling art from his basement in Brixton and Damien [Hirst] was living downstairs, sleeping on the floor.”

As a cross-media group of creatives they encouraged each other. “It was a help to me because you felt that everything was possible,” she says. “The other big thing was that you could badly behave and it was OK. I always remember Lee going. ‘Oh, push it, darling. Go further.’ So I would come to Paris to do shows and everyone came with their stands and was very polished and I’d turn up with a bag of nails and a hammer and bang away. The point was that you wanted to be different. You didn’t want to make what was already out there.”

The bag of nails may have gone but the attitude lives on. It will make Amfitheatrof’s time at Louis Vuitton an exciting thing to watch. 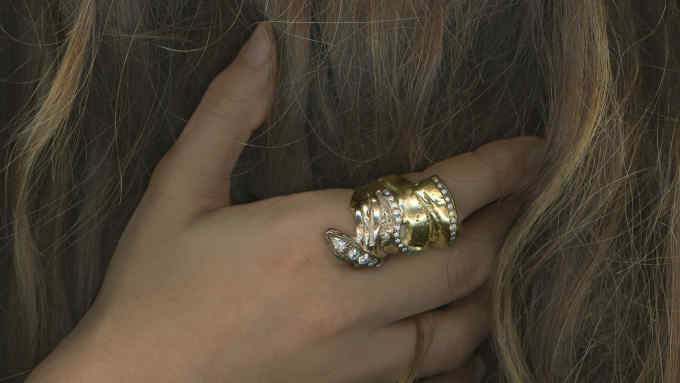