Wirecard: the timeline | Free to read

1999 Wirecard is founded in a Munich suburb, backed by venture capital in the late stages of the dotcom boom. A payment processor, it helps websites collect credit card payments from customers.

2005 Wirecard joins the Frankfurt stock market by taking over the listing of a defunct call centre group, a route that avoids the scrutiny of an initial public offering. It has 323 employees and the core of its business is managing payments for online gambling and pornography.

2006 Wirecard moves into banking with the purchase of XCOM. The renamed Wirecard Bank is licensed by Visa and Mastercard, meaning it can both issue credit cards and handle money on behalf of merchants. This unusual hybrid of banking and non-banking operations makes its accounts harder to compare with peers, and helps persuade investors to rely on the company’s adjusted versions of financial statements.

2008 The head of a German shareholder association publishes an attack on Wirecard, suggesting balance sheet irregularities. EY is appointed to conduct a special audit, and the following year replaces the small Munich firm that had previously acted as group auditor. The German authorities eventually prosecute two men in connection with the attack, who had not disclosed positions in Wirecard stock.

2010 Jan Marsalek, a young protégé of Markus Braun and a fellow Austrian, is appointed chief operating officer. They tell staff that Wirecard has global aspirations, so the company will operate in English and plot an international expansion.

2011 to 2014 Wirecard raises €500m from shareholders and goes on a shopping spree. It buys up obscure payments companies across Asia in a series of oddly structured deals, starting in Singapore, which becomes its headquarters in the region. Investors are drawn to Wirecard’s rapid growth and claims of superior payments technology.

2015 The Financial Times begins to publish its House of Wirecard series on FT Alphaville, raising questions about inconsistencies in the group’s accounts. When the FT suggests that there appears to be a €250m hole in the group’s balance sheet, Wirecard responds with letters from Schillings, a UK law firm, and hires FTI Consulting in London to manage its external public relations.

In October, Wirecard announces its largest-ever takeover, of Indian payments businesses in a €340m deal.

J Capital Research reports that Wirecard’s operations dotted across Asia are far smaller than it claims. Wirecard says short sellers paid for the report. Investment bank analysts report back favourably from a tour of the group’s Asian offices.

2016 Anonymous short sellers publish a dossier of allegations related to money laundering under the pseudonym Zatarra. Wirecard denies everything and BaFin, the German financial regulator, investigates Zatarra and others for alleged market manipulation.

A European private investigations agency outlines plans to target the FT and a group of London financiers. Journalists, researchers, hedge funds and short sellers critical of Wirecard begin to receive “spear-phishing” emails in a campaign of hacking that continues for years. It is not clear who was behind these efforts.

2017 A clean audit from EY and a marked improvement in reported cash generation prompt renewed investor enthusiasm for Wirecard shares, which more than double in price. The group announces a deal to take over Citi’s payment processing operations across 11 countries in Asia, a transaction designed to make Wirecard a household name in the region.

Markus Braun ends the year by borrowing €150m from Deutsche Bank in a margin loan secured with large parts of his 7 per cent stake in Wirecard.

March 2018 Inside Wirecard’s Singapore headquarters the group’s own legal staff begin an investigation into three members of the finance team. The probe is launched after an internal whistleblower raises allegations about a plan to fraudulently send money to India via third parties in a type of scheme known as “round tripping”.

August 2018 Wirecard shares hit a peak of €191, valuing it at more than €24bn. The group claims it has 5,000 employees, who process payments for about 250,000 merchants, issue credit and prepaid cards and provide technology for contactless smartphone payments. Clients include German discounters Aldi and Lidl, as well as close to 100 airlines.

September 2018 Wirecard replaces Commerzbank in the prestigious Dax 30 index, making it an automatic investment for pension funds around the world. As Europe’s largest fintech, it is seen as a rare German tech company able to challenge the giants of Silicon Valley.

Mr Braun, whose personal stake in the group is now worth €1.6bn, tells investors that sales and profits will double in the next two years.

October 2018 Whistleblowers contact the FT concerned that the internal investigation in Singapore has been squashed.

January 2019 The FT publishes its first story on the Singapore investigation, which is immediately described as “false” by Wirecard. BaFin starts to investigate the FT over an allegation of market manipulation.

February 2019 The Singapore police raid Wirecard’s offices. BaFin announces a two-month ban on short selling, citing Wirecard’s “importance for the economy” and the “serious threat to market confidence”, after the share price falls below €100.

March 2019 The FT reports that half of Wirecard’s business is actually outsourced, with the payments processing handled by partners who pay Wirecard a commission.

Attempting to visit some of these Wirecard partners in the Philippines, the FT instead discovers a retired seaman and his family, who are bemused to learn that their house is supposedly the site of an international payments business.

Wirecard announces it will sue the Financial Times.

April 2019 Wirecard announces a €900m injection of cash from SoftBank, an apparent vote of confidence from a Japanese conglomerate known for large tech investments.

On the same day the FT publishes further details of Wirecard’s outsourced payments processing. It appears that arrangements with three partner companies in the Philippines, Singapore and Dubai were responsible for most of the group’s worldwide profits. Mr Braun rubbishes the figures in a press conference, calling them inaccurate.

July 2019 The FT sends pre-publication questions to Wirecard regarding its relationship with the Dubai partner. In response Wirecard alleges collusion with short sellers, based on a tape recording obtained in a sting operation overseen by Rami El Obeidi, former head of foreign intelligence in Libya’s National Transitional Council, which governed the country temporarily in the wake of Muammer Gaddafi’s death. The German newspaper Handelsblatt reports Wirecard’s allegations.

The FT appoints a law firm to conduct an investigation into the claims by a London financier in the recording to have advance warning of stories, which finds them groundless.

The FT is served with court documents. Wirecard is suing for “misuse of trade secrets”, in relation to January and February’s articles.

To Dublin and Dubai with KPMG as the new referee

October 2019 The FT publishes documents indicating that profits at Wirecard units in Dubai and Dublin were fraudulently inflated, and that customers listed in documents provided to EY did not exist.

Wirecard says the documents are not authentic and reiterates again its staff and executives have done nothing wrong. Under pressure from investors it appoints KPMG to conduct a special audit, which it says will clear it of wrongdoing.

December 2019 The FT reports that Wirecard appears to have counted cash held in escrow accounts managed by trustees within the cash balances declared on its financial statements.

Wirecard says judgments about cash are subject to detailed review in its audit process.

March 2020 The KPMG audit is supposed to conclude, but publication of a report from the accounting firm and full-year results audited by EY are postponed to the end of April.

EY receives documents purporting to be from a trustee in the Philippines that list €1.9bn said to be held in accounts at two banks in the country.

April 28 2020 KPMG’s report is published. The accounting firm says it cannot verify that arrangements responsible for “the lion’s share” of Wirecard profits reported from 2016 to 2018 were genuine, citing several “obstacles” to its work.

KPMG also queries €1bn of cash balances, on the basis that the only evidence for the sum were documents provided by a Singapore trustee that cut ties with Wirecard around the time the special audit began.

Mr Braun tells investors that “E&Y informed us this morning that they have no problem at all to sign off the audit 2019”. Publication of results is postponed to June, a delay attributed to coronavirus. Any wrongdoing is denied.

The search follows a criminal complaint submitted a few days earlier by BaFin, Germany’s financial watchdog. The complaint relates to potentially misleading statements made by Wirecard to investors ahead of the publication of the KPMG report.

June 18 Wirecard is supposed to publish audited results for 2019. Instead it announces that €1.9bn is “missing”.

Wirecard announces it is in “constructive talks” with banks that have the right to terminate €2bn of loans due to the lack of audited accounts.

June 22 Wirecard acknowledges for the first time the potential scale of a multiyear accounting fraud, warning that the €1.9bn of cash probably does “not exist”.

The payments company says it is assessing “whether, in which manner and to what extent such business has actually been conducted for the benefit of the company”. Previously announced financial figures may not be reliable, it adds.

Mr Marsalek, who had direct oversight of the areas concerned, is sacked.

June 23 Mr Braun is arrested on suspicion of false accounting and market manipulation. A spokeswoman for the Munich prosecutors’ office tells the FT that the company’s former management board is also under investigation.

June 25 Wirecard says it will file for insolvency. 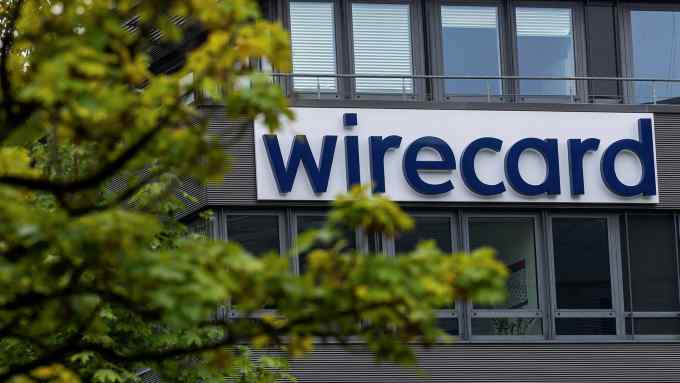