Why vintage cookbooks have got collectors coming back for seconds

From ancient tomato sauce to ‘Why Not Eat Insects’? Feed the imagination with these culinary treasures

Take half-a-dozen tomatoes that are ripe, and put them to roast in the embers, and when they are scorched, remove the skin diligently, and mince them finely with a knife. Add onions, minced finely, to discretion; hot chilli peppers, also minced finely; and thyme, in a small amount. After mixing everything together, adjust it with a little salt, oil, and vinegar.” First published in Lo Scalco Alla Moderna in Naples in 1692, this is not only the earliest recorded recipe for a tomato sauce but also the first suggestion that tomatoes be used in Italian cooking. It is a fine example of the cultural value a rare cookbook can hold – and the prices they can command: a third edition sold for £10,000 in Sotheby’s 2010 sale Books For Cooks.

Classic titles are the bread and butter of the genre. A very good signed first edition of Julia Child’s Mastering the Art of French Cooking will go for around $7,500, estimates Don Lindgren, who runs Rabelais, Maine’s antiquarian bookshop specialising in cookbooks. A fine first edition of Elizabeth David’s A Book of Mediterranean Food could sell for $1,500 to $2,000. Irma Rombauer’s The Joy of Cooking, self-published in 1931 and one of the first books catering to the US middle-class cook, is “one of the most iconic in American history,” he adds. “When the New York Public Library issued a list of 100 great books for its 100th anniversary it was the only cookbook.”

But Emma Walshe, of London rare book dealer Peter Harrington, also emphasises a rich seam that celebrates the weird and wonderful. “The culinary arts can lend themselves to innovative ideas and eccentric personalities,” she says. A first edition of Abraham Edlin’s 1805 A Treatise on the Art of Bread-Making (£1,000) finds the author describing the practice of bread-making as “a beautiful and interesting branch of experimental philosophy”. She also highlights Alchemist’s Cookbook by Ahmed Yacoubi (£475 for a signed first edition), a Moroccan artist and storyteller who became a protégé of Francis Bacon. It offers 125 recipes, including a “soup to cure jealousy”.

What’s also rewarding, adds Lindgren, is when current food trends, new perspectives or political shifts help overlooked titles to resurface. He has enjoyed perusing the 19th-century title Why Not Eat Insects? ($1,000) and currently has a near-fine late 19th-century title, One Hundred New and Original Receipts by Aunt Priscilla of New Bedford ($500), the earliest American book on the subject of seaweed as an ingredient. Distilling manuals – such as a mid-19th-century manuscript recipe book for fermented and distilled liquors ($750) – are proving popular among the burgeoning group of craft brewers.

“As the wider world awakens to the African-American role in American culture and history, there’s also more and more interest in acquiring these titles that were previously under-recognised or under-represented,” adds Lindgren. But they are hard to come by, with only four known 19th-century cookbooks in the category, including Robert Roberts’s The House Servant’s Directory (1827), which is currently listed on Abebooks at £5,956.

For many collectors, the magic is in poring over an unusual illustration or learning about a rarefied technique rather than embarking on an evening spent making “bear-on-the-bone” (a recipe from one of the oldest printed cookery books), says Sotheby’s head of books and manuscripts, David Goldthorpe. Many of his clients are chefs “who collect both for pleasure and for inspiration”.

“I never use them,” says writer and curator Fanny Singer of her collection. “The recipes are generally too dated or complex or just unappealing, but the writing and illustrations are often so wonderful. I use them to get into a headspace of writing about food generally, rather than cooking it.” She sources her books from Omnivore Books in San Francisco and Bart’s Books in Ojai, California, and stores them “alongside all my beloved art and poetry books. I consider them to be genetically related.”

HTSI
Why your old Beanos now command much more than pocket money... 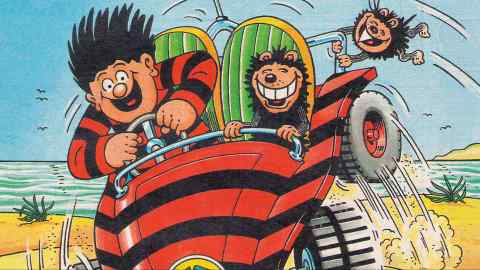 “I look for books that teach me something, whether it be about provenance, history, terroir or technique,” says Skye Gyngell of London’s Spring restaurant. “I find that those books aren’t written very often now, and so I refer back to books written many years ago – such as The Food Of France by Waverley Root – which are fascinating and detailed.”

And while pristine editions draw the highest bids, the odd splash of sauce can add charm. “I think it’s fun when you come across a book that we sometimes describe as a ‘kitchen copy’,” says Walshe. Lindgren agrees: “Did the owner pass it from hand to hand? Did they make marks, corrections, comments? The books become living repositories of other kitchen information.”