If you think the same, join us
US equities

Small stocks no longer deliver big gains for US investors

There used to be a simple but effective strategy in US equity markets: buy stocks in small companies — and then wait.

For years, smaller stocks tended to do better than bigger so-called blue-chips, such as those in the S&P 500. Some academics attributed the trend to their greater riskiness, while others said it was because investors systematically overpay for better-known, more glamorous companies. Regardless of the cause, size has long been considered one of the reliable “factors” that drive market returns in the long run.

But over the past decade, small capitalisation stocks in the US — often just called small-caps — have lagged well behind the returns of America’s bigger, mainstream indices, raising questions over whether this longstanding truism of finance still holds.

“Size is a factor that we would say is potentially not present any more,” said Stephan Kessler, head of quantitative strategies at Morgan Stanley.

The economist Rolf Banz first showed the existence of a small-caps factor in a seminal 1981 paper. Other academics later found that this was also true for other stock markets, such as those in Europe and Japan.

But over the past decade the Russell 2000 index of US small-caps has returned just under 150 per cent, well below the S&P 500’s 203 per cent rise during the same period. So-called growth stocks have returned more than 400 per cent in the past decade, while the technology-heavy Nasdaq 100 has climbed nearly 500 per cent.

Analysts say the cause of this year’s underperformance is primarily the economic impact of Covid-19, which has harmed smaller, more domestically-oriented companies than multinationals.

Financial, industrial, discretionary spending and real estate stocks make up 16 per cent, 15 per cent, 13 per cent and 6 per cent respectively of the Russell 2000. That makes the index more dependent on an economic upswing than the tech-dominated S&P 500, notes Nicholas Colas of DataTrek.

“The nature of the economic regime has meant that large-caps have a privileged position,” said Dave Fishwick, chief investment officer of M&G’s macro investment business. “In this environment, large balance sheets with lots of cash is obviously an advantage.”

Strategists point out that there are also secular headwinds that mean small-caps may never reassert their historical outperformance.

Mr Kessler attributes the decline to the advent of electronic trading, which has made buying and selling smaller stocks much cheaper, and a proliferation of information on even the smallest companies, which has made it more difficult to unearth gems that others have overlooked.

Those two forces may have “permanently impaired” the small-cap factor, Mr Kessler said.

Equities
On the cusp of a record, the S&P 500 won’t budge 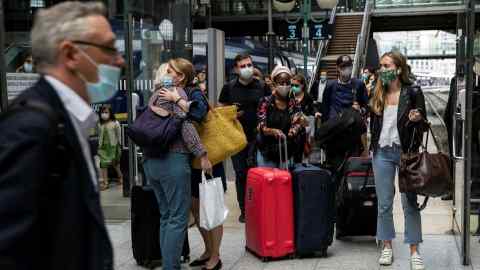 Jan Loeys, a senior strategist at JPMorgan, argues that globalisation, a less hostile US antitrust environment and the massive economies of scale enjoyed by technology giants also help explain why small-caps’ edge has been steadily eroding since the early 1980s. “Long term, the . . . effect isn’t there any more,” Mr Loeys said.

Nonetheless, the gloom for smaller stocks is primarily a US phenomenon. Japanese, European, UK and Australian small-caps have all done better than those countries’ blue-chip equity indices over the past decade, and only narrowly underperformed in China.

Nor is the recent poor run necessarily permanent, say some analysts, who point out that these corners of the stock market are still less efficient than large-caps, as they are less liquid and often thinly covered by professional analysts. In the first decade of the new millennium, the Russell 2000 returned nearly 24 per cent, while the S&P 500 fell more than 24 per cent. The Nasdaq 100, meanwhile, lost almost half its value over the 10 years after the dotcom bubble burst.

Dimensional Fund Advisors, a $514bn investment group originally built to exploit the small-caps factor, still thinks that the “excess returns” such stocks have demonstrated over decades cannot be ignored.

“Any time one of the risk premia underperforms over a five- or 10-year period we hear stories about shifts in the economy and ‘new normals’ that will make value or small-cap stocks no longer offer higher returns,” said Savina Rizova, head of research at Dimensional.

“We believe that risks and returns are related . . . and therefore we shouldn’t expect these effects to disappear.”

Get alerts on US equities when a new story is published