Collector Julia Stoschek: ‘I could come back as a hologram’

“It’s always been my dream to make art accessible, and I think this is the first time a private collector has gifted their art to everyone,” says Julia Stoschek, the German collector of video and time-based art. She is discussing her decision to put online more than 218 works, by 60 artists. They will be viewable in their entirety and more will be uploaded to a website as time goes on, until her whole collection of more than 870 works is available.

Stoschek is speaking to me from Berlin, where the second of her two private Julia Stoschek Collection museums is based. The first, JSC Düsseldorf, was founded in 2007; the JSC Berlin space in 2016. They display one of the world’s most important collections of video, audio, multimedia environments, internet-based installations and performance pieces.

Stoschek is lively, talkative and animated, filling up the screen with her presence. Her dark hair falls to the lacy white blouse tucked over a simple green top: a medallion glints around her neck. Heiress to an automotive parts fortune, she says she was brought up with both technology and moving images.

“My father loved photography and filming and caught a lot of the events of my childhood on video,” she continues. “And I love movement and the moving image.” Indeed, Stoschek has considerable energy — energy that enables her to sit on several museum boards and committees, including Los Angeles’ Museum of Contemporary Art, Berlin’s KW Institute for Contemporary Art, New York’s Whitney Museum of American Art and Kunstsammlung NRW in Düsseldorf. She is also a generous patron for multiple causes.

Stoschek comes from a cultivated and wealthy background, a family mostly focused on theatre and music. Her first visual shock was when she saw Douglas Gordon’s video Play Dead: Real Time (2003) at Gagosian Gallery in New York. This monumental video showed an elephant playing dead. “I spent hours watching it,” she says. Seeing that, as well as meeting the renowned collector Harald Falckenberg, set her on the path to collecting, but in her case collecting video and time-based art. She quickly realised she would need a space for her acquisitions. “After my second purchase, it became clear to me that a large two- or three-channel installation could not be put in a living room.

“I was pretty naive when I started the first museum: I had no idea about how to organise it, put on exhibitions, but I was passionate and energetic, and I am structured and organised,” she says. Her aim is to be able to present the whole arc of the history of time-based works, from the 1960s to today. “Time-based media is the last part of art history where you can still build a collection from the beginning,” she says. With her collection, she says, “I have the possibility of shaping the future, and that is giving me a lot of energy.”

Indeed, during the lockdown period, she says she has bought more works than ever before, as a way of supporting artists and galleries. The first selection of works being put online features a wide range of creators, including John Bock, Monica Bonvicini, Ian Cheng, Nathalie Djurberg & Hans Berg, Tracey Emin, Cao Fei, Fischli & Weiss, Douglas Gordon, Christian Jankowski, Klara Lidén, Elizabeth Price, Pipilotti Rist, Wolfgang Tillmans, Ryan Trecartin and Tobias Zielony. In addition, she is working with the Daata art fair (online from April 19-May 9) to showcase works commissioned by Daata and bought through the platform.

The move to Berlin, where she now lives, came in 2016, but there is a shadow hanging over her current space. It needs renovating, and she has to leave by the end of 2022. For the moment, no other solution has been found by her landlord, the German state. The day after our conversation, she was due to look at another location in the city.

“I would love to stay here,” she says. “Berlin is the most international city in Germany, and the audience is biggest here. The scene is young and buzzy, with lots of artists and creators in the tech and fashion worlds. But it is not so easy for private collectors.” Indeed, a number have left the city, among them Friedrich Christian Flick, Thomas Olbricht and Erika Hoffmann, taking their collections with them. “In the past, nobody in this city seemed to feel responsible for this situation and quite frankly, the private sector was not rewarded,” laments Stoschek. “But let’s see what happens.”

She is also open to taking her collection abroad: she is on the board of trustees of MOCA Los Angeles, and doesn’t exclude setting up a space in the US, or China — “Maybe not now, but we live in a global world, we must think globally.”

Since the collection is being put entirely online, I ask her whether she needs her museums at all. Her reaction is immediate. “I definitely think you need a physical space!” she exclaims. “The experience is completely different — you have special installations, the environment and sound rooms, it’s so much more enriching than seeing a work on a screen. And people want to see exhibitions, more and more. But you need the combination — a work can be seen initially on a computer at home, then in real life.”

When we speak, she is preparing for her two museums to reopen. “I’m so happy to get a bit back to normality, even with quite severe restrictions, with just 45 people allowed in the spaces at one time.”

I ask about the future of the collection, beyond her lifetime. “I’m dreaming that new technology means that when I’m gone, I could come back say as a hologram, walk through the exhibitions and explain the artworks to visitors!” she says. She has a five-year-old son and says he is growing up surrounded with art. “He has no choice!” He has been to Art Basel and already has some opinions on art he saw there (Kiefer got the thumbs down, Warhol the thumbs up). She is only in her mid-forties, so it is early to make plans. But even now, Stoschek is considering the survival of her collection. “We want to be able to pass it on to the next generation,” she says. 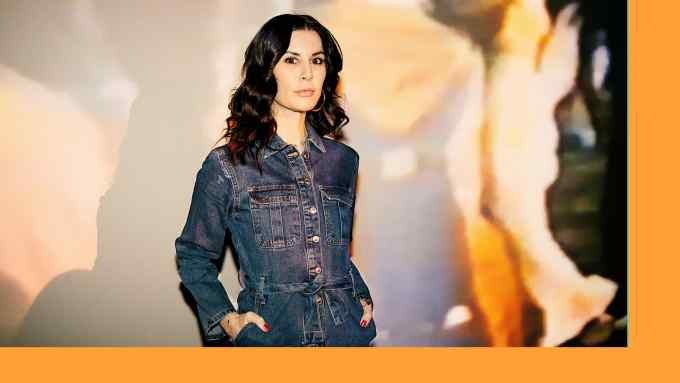