Carbon counting: how much do your lifestyle choices cost the planet?

Greenhouse gas emissions this year are likely to be higher than ever recorded before, making targets to limit global warming by 2030 harder to achieve.

But there are ways you can contribute, through lifestyle choices and actions to lower your carbon footprint. Here, we calculate the costs and savings of these decisions.

A strict vegan diet that cuts out all animal products is tough to stomach, for many. But a more flexible approach, such as eating more fish and lowering beef consumption, can still cut the carbon footprint of your diet.

The meat and dairy industries are serious contributors to global warming, accounting for about 14.5 per cent of global greenhouse gas emissions, according to the UN’s Food and Agriculture Organization.

Cattle are the main source of the livestock industry’s hefty carbon hoofprint. Cows belch out methane, which has 80 times greater warming power as a greenhouse gas than carbon dioxide.

They also convert plant material into protein with relative inefficiency. For every 100g of protein sourced from herd-raised beef, 50kg of CO2 equivalent is released over its production lifecycle, according to researchers at Oxford university and LCA Research Group. That is nearly nine times more than is released from poultry, and 25 times more than from tofu.

Eating less beef can cut human emissions, too. Consider that an average meat-eater, consuming a varied daily diet of 2,000 calories, is responsible for 5.6kg of CO2 per day (adjusted for age and sex), according to another Oxford study. Switching to fish can reduce that individual’s greenhouse gas emissions by 31 per cent to 3.9kg of CO2, which is similar to shifting to vegetarianism. But going vegan makes the biggest difference, slashing the carbon output by roughly half to 2.9kg.

For those concerned with reducing their impact and still enjoying the foods they like, the prescription is clear: plenty of fruit and vegetables, with occasional animal protein. It is good for the person and the planet.

We all know that looking good comes at a price. But there is also a less visible cost borne by the planet. The global fashion industry is estimated to account for up to 10 per cent of carbon emissions, which is five times more than the entire aviation industry.

When choosing clothes, the materials and manufacturing matter. A polyester shirt, for instance, comes with a 5.5kg carbon cost, about a quarter more than an equivalent cotton shirt. But the environmental cost of cotton is still high. About 2,700 litres of water and large quantities of pesticides are needed to make a single shirt. And locally produced polyester can lower transport emissions, whereas cotton production is mostly in India and China and must be transported around the world.

The biggest carbon reductions need to come from the fashion industry itself, though — such as manufacturers shifting to more environmentally sustainable cotton growing techniques. Recycling will also have to be prioritised more, since almost 90 per cent of what the industry creates either goes into landfill or is incinerated.

Shopping at retailers with firm environmental pledges can help. However, consumers are currently buying 60 per cent more clothes today than 20 years ago. So, opting to buy fewer new clothes is the simplest thing to do. Less frequent washes, with no tumble drying, will also reduce your carbon impact.

Foreign holidays became easier on the wallet thanks to low-cost airlines and package deals. But trips still leave behind a heavy carbon footprint.

Let us compare the impact of three holiday options for Brits: a Mediterranean cruise, a villa stay in Tuscany, and a camping trip to Wales. Carbon levels are naturally lower for local trips, but just quite how much lower is striking. The individual carbon footprint of the cruise is almost five times that of the villa holiday and 25 times that of the camping trip.

The nature of cruises means that, even on a Mediterranean trip with numerous stops, the vessel requires power 80 per cent of the time. Electricity for vast onboard amenities must be generated by diesel-fuelled engines when at sea.

The same is true for our camping trip to Wales where excluding car travel reduces emissions to about 1 per cent of the Tuscan holiday.

The murky legal status of open seas means that regulation to limit the environmental impact of shipping has been slow. Image-conscious cruise lines say they are ahead of the rest of the shipping industry with new lower-pollution liquefied natural gas-powered ships. However, these can even have a higher carbon footprint once gas leakage is accounted for.

In December last year, more electric cars than diesel models were sold in Europe — for the first time ever. And, over the course of 2022, global sales of electric cars are expected to surpass 6mn, according to Gartner, the consultancy.

Electric vehicles (EVs) are cleaner than their traditional counterparts. Consider the lifecycle CO2 emissions of fully electric cars produced in 2020, assuming they are driven for 250,000km: in the UK, US and Germany, such vehicles offer large emission reductions of 76 per cent, 60 per cent and 49 per cent, respectively, compared with petrol cars, based on the typical mix of power sources in mains electricity.

But how clean your electric car is to run, in reality, will depend on how clean the energy that powers it actually is.

Germany’s underperformance in cutting emissions relative to the UK and US reflects its reliance on coal as a fuel for generating electricity. Hydroelectric-dependent countries, such as Norway, do much better. Britain gets more than a third of its electricity from renewables so it also performs relatively well.

China is the world’s biggest market for electric cars, with almost 3mn sold last year. However, it is heavily dependent on coal power, which means a much smaller reduction in emissions for EV use occurs in the country, at less than a fifth.

Tesla’s claim to be working towards a zero emissions future took a knock in 2021 when the electric car company opted to invest $1.5bn in bitcoin.

Most cryptocurrencies, including bitcoin, are created through “mining”, which requires energy intensive computer processors. Private investors in cryptocurrency are, therefore, financing climate change in the same way as if they were purchasing shares in oil majors.

Environmental costs rise in lockstep with bitcoin prices, which have nearly doubled since the start of the year. The higher the price, the more demand for mining to release new coins into circulation. The more coins are mined, the more complex the proof-of-work algorithm required to add blocks to the bitcoin blockchain. This, in turn, requires more processing power and electricity.

So, with almost 19mn bitcoins of a possible 21mn mined so far, normal computers are no longer able to do the job. And the share of renewable energy used for bitcoin mining has fallen from about two-fifths in 2020 to about a quarter now, says Alex de Vries, an economist who runs the Digiconomist blog. Bitcoin’s annual carbon footprint is now 114mn tonnes of carbon dioxide, equivalent to the carbon footprint of the entire Czech Republic. A single bitcoin transaction has the same carbon footprint as 2.8mn uses of a credit or debit card.

Plans have been announced to make rival cryptocurrency blockchain ethereum greener this year. A new underlying protocol, known as proof of stake, will use 99.9 per cent less energy, it is claimed. 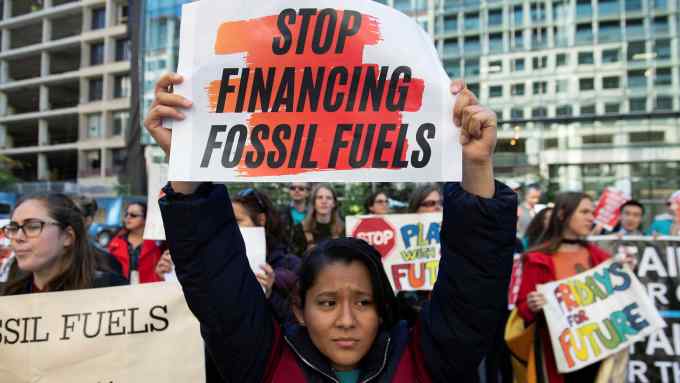