Earlier this month we compiled a list of treasured gelato, granita and glaces hotspots around the world. These are the places you thought we’d missed

The names of readers (either their social media handle or FT commenting name) have been given in bold type at the end of each entry. Where readers gave further details about what they love about a particular store, that has been included as a quote.

“Definitely one of the best in the Boston area”, Toscanini’s was founded by 12 friends who manned the shop for free to ensure it survived its first year. Today the family-run business serves up classic ice cream with an American twist: maple walnut, black bottom pie and classic cookie dough. tosci.com Centrist American, MikaMika and Shanghai Soundings

This family-run business has five parlours on Île de Ré, the tiny island that it honours with its signature oyster flavour. “As a connoisseur of mint choc chip, I can confirm theirs is the best I’ve had in my life – intense and almost sorbet fresh”. la-martiniere.fr Beatrice Hodgkin 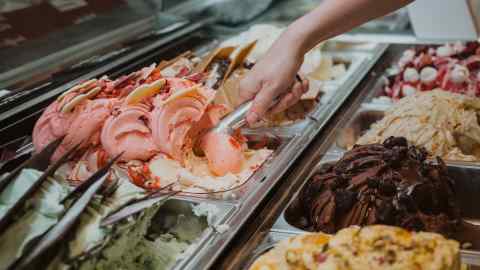 One of Israel’s leading ice-cream parlours, Golda credits its success to its “quality raw materials” and innovative flavours. This is the place for crunchy almonds, caramelised macadamia nuts and a “white chocolate meringue kiss”. goldaglida.co.il Ruben_B

An unassuming parlour in the East Midlands serving seasonal Italian gelato made from locally sourced milk. “Their fior di latte is divine.” gelatovillage.co.uk VB and Me

For adventurous ice cream lovers: Eissalon am Schwedenplatz has a rotating selection of more than 40 flavours, the most unusual being pineapple, basil and black sesame cream. “Europe’s best by a mile.” gelato.at Oliver Cromwell, LifelongpinkFTreader and PKFTfaninNY

“The best I have had in the UK has to be Jack’s Gelato. [The] menu changes daily, so go for whatever is seasonal. Its bog-standard vanilla [and] dark chocolate is nothing to shout about, but it’s the wackier flavours where they really excel – yuzu, liquorice [and] roasted banana. At £2.50 a scoop it’s unbeatable.” jacksgelato.com Our Man in Middle England

Named after a small pink orchid that grew nearby, this small-batch ice-cream shop originally started as a dairy farm, and now stocks cheese, butter, milk and yoghurt in six locations across Connecticut. “Love their peach ice cream”. arethusafarm.com EliD and Ljay

Founded by Spaghetti Western actor Terence Hill (aka Mario Girotti), this Paris institution is inspired by artisan gelato makers in Umbria, where Hill’s great uncle ran a gelateria. All flavours are 100 per cent natural, with highlights including Sicilian cassata, pistachio and olive oil. girottiparis.com P

A north London treasure, even the most frostiest of afternoons will invite queues down the street. Romanian husband-and-wife duo Ciprian and Iuliana learnt their trade in Verona, where they developed a taste for classic Italian flavours such as pistachio, extra-dark chocolate sorbet and ricotta and caramelised fig. gelateriarg.co.uk Sprinzette and JLHiggins

“A year ago I would have said that La Sorbetteria Castiglione in Bologna is the fairest of them all – I’ve been going there for more than 15 years and have a lifetime’s experience of eating ice cream – sorry, gelato – over most of Italy. But the Laboratorio del Gelato in Viareggio really turned my head this year and I can happily say that it’s the best in the world as I know it. Superb flavours, perfect texture, not too sweet [and] exquisite flavour combinations.” lasorbetteria.it; Viale Ugo Foscolo 11, Viareggio 55049 dunroamin

Taking its culinary cues from south-east Asia – think lychee, basil and blue ginger – Birds of Paradise has four parlours across Singapore, all of which serve house-made ice cream in a minimalist setting. birdsofparadise.sg The Point and Ym89

A tiny, family-owned patisserie on the steepest of mountain roads in the Metn, Patisserie Azrak has been making all-natural homemade ice cream using the freshest ingredients since, well, forever. It’s where I tasted my first ever banana ice cream back in 1991 — I’d recommend the pistachio, rum raisin and milk flavours. facebook.com Rasha Kahil

A Cape Town “go-to”, Moro Gelato is inspired by the ice cream that co-owner Stefano Moro made while growing up in Liguria’s coastal hills. Today his classic flavours – many of which are dairy-free fruit sorbets – are handmade each week and served in pastel coloured cups around the city. morogelato.co.za Hhes

On top of a generous gelato selection, Panna e Cioccolato (aka “cream and chocolate”) offers cassata, lingotti and maritozzi – essentially all manner of treats filled with light, fluffy cream. Wash any one of them down with a classic affogato (vanilla ice cream “drowned” in a shot of espresso). pannaecioccolato.net Dardarlo

“Of course, everyone will have their favourite. My choice [goes] to Riccardo’s artisanal ice-cream shop in Halmstad, Sweden. Riccardo claims that his recipes go back to his grandmother – he is an Italian immigrant and his ice creams are sublime.” riccardo.se Gonzalez49

“If you are in Manhattan near the Gramercy Park neighbourhood, Caffè Panna is the best ice cream in the city.” Flavours change daily and are best finished off with a non-negotiable dollop of fresh cream. caffepanna.com TIngrassia

This Tuscan parlour “offers a myriad of flavours, from salted caramel to melon sorbet. You can buy an extra-large container and choose eight flavours to take home with you. Biscuits supplied. Once home, guess which flavour is which. My personal favourite is malaga.” Corso della Libertà 64, Castiglione della Pescaia 58043 Madeleine H

“Hidden in a corner of Herne Hill train station, Minus 12º Craft Ice Cream is one of those beloved local haunts that no one shouts too loudly about, in case the queue gets even longer. The Jersey Milk flavour, made with The Estate Dairy organic milk, and a chocolate flavour made with single-origin Italian chocolate, are probably their classics – simple, packed with flavour and, crucially, not too sweet – but they’re also known for mixing it up with special-edition flavours like their Mini Egg concoction that pops up around Easter time.” minus12.co.uk Lauren Hadden

Of the 20 or so stores across Australia – plus one in Hong Kong – Messina’s outpost in Sydney is the fan favourite – “period”. But regardless of location, you’ll always find the same 40-flavour cabinet: 35 traditional flavours and 5 weekly specials. gelatomessina.com JFBee

“Cheaper than therapy” is the tagline for this Jo’burg-born parlour chain. Paul started out whisking custard in his parents’ kitchen, and now supplies ices to more than 180 shops and restaurants across South Africa. paulshomemade.com Marc Waldburger and D.Patrick from Gonzoville

Although their opening hours – Monday to Saturday; 1pm to 8pm – are apparently “not in tune with the desires of normal punters”, this standalone parlour draws in crowds for its all-natural recipes, organic ingredients and Italian-inspired flavours. eiswerkstatt-stuttgart.de Cara

“Handmade classic and experimental flavours. Where else will you find basil [and] cicada chip ice cream alongside corn, coffee, vanilla and everything else?” thebentspoon.com MikaMika

“Best in the World is Las Delicias in Montevideo. Italian-style and terrific,” it dates back to the early 1960s, when the founding Toscani family moved to Uruguay from Italy. lasdelicias.com.uy Alan101

“A cool place in a trendy part of the city serving long into the night – you can sit down in the nearby square and [watch] the Spanish nightlife unfold around you. The flavours, the friendly, passionate staff and generous servings make it an absolute must for anybody with a sweet tooth (or any tooth for that matter!)” anita-gelato.com Melon Ken