Hong Kong will continue to be a pre-eminent financial centre and will play a central role in opening up China’s financial system to the rest of the world despite recent political upheaval, according to the new head of BlackRock’s Asia-Pacific operations.

Rachel Lord, whose move to Asia after four years running the asset manager’s European operations was announced on Tuesday, said the city’s history and business infrastructure supported its status.

“Infrastructure is very hard to move,” Lord told the Financial Times. “It’s less about politics and more about the way the ecosystem is set up and I don’t see any sign that Hong Kong loses its pre-eminence.”

Lord will oversee BlackRock’s planned expansion in China from Hong Kong, according to a memo sent to the asset manager’s staff. She replaces Geraldine Buckingham, who will continue at BlackRock as a senior adviser but will move to Beijing. Buckingham is married to Dominic Barton, the Canadian ambassador to Beijing.

Financial firms have been considering whether to relocate operations or staff from Hong Kong since Beijing imposed a national security law last year to clamp down on political unrest, raising questions about whether the business environment is becoming more unpredictable.

“We are not alone in looking at the opportunity in China and I fully expect we are the ones that get it right,” said Lord.

China’s mutual fund industry increased assets by 48 per cent to a record $3.1tn in 2020 and UBS expects the country to become the world’s second-largest asset management market after the US this decade.

Non-US businesses account for about a third of BlackRock’s revenues and it has set a target of reaching 50 per cent over the next decade, with China central to the effort. Asia-Pacific accounts for just 7 per cent of non-US revenues at present.

The company expects to win approvals within months to operate a wholly-owned fund management business in China, which would allow it to sell funds to retail investors, and for its wealth management joint venture with Temasek, a Singaporean state fund, and China Construction Bank. BlackRock holds a 50.1 per cent stake in the joint venture. 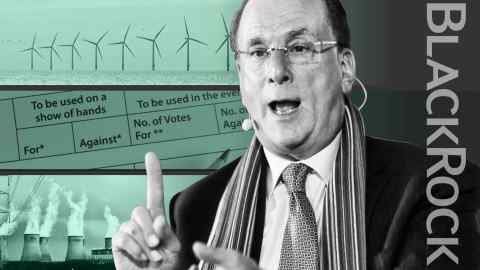 The need to encourage its citizens to save for retirement means that China will accelerate the opening up of its domestic market to foreign financial firms, predicted Susan Chan, who will continue as BlackRock’s head of Asia, reporting to Lord.

“The rules will change and there will be politics,” Chan said. “Our job is to work within the scope of those rules.”

Lord is one of BlackRock’s rising stars and her move to Asia is the latest reshuffle of the asset manager’s top ranks. Stephen Cohen, currently head of BlackRock’s iShares and index investing business in Europe, Middle East and Africa, will replace her as head of Emea.