The Turkish lira whipsawed on Monday after President Recep Tayyip Erdogan rejected warnings from business on the dangers of recent interest rate cuts and vowed that there was “no going back” from his approach.

The currency, which has lost about 40 per cent of its value against the dollar since Erdogan ordered the central bank to start lowering borrowing costs in September, fell to a new record low of TL18.36 against the dollar on Monday. It later rallied to TL14.8 in chaotic trading late in the Turkish day after the president announced a scheme aimed at encouraging the country’s savers, who have increasingly kept their savings in dollars and gold, to hold their money in lira.

However, in a sign of growing concern over the fallout from the volatile currency on the health of the broader financial system, the cost of protecting against a default on Turkish debt has climbed sharply. The spread on the five-year credit default swap has risen to 612 basis points, from about 300bp at the start of the year, according to IHS Markit data collated by Refinitiv.

Trading on Turkey’s main stock exchange was halted on Monday for the second consecutive session following a 5 per cent decline for the flagship index. The Bist 100 trimmed its fall to 1.4 per cent after trading resumed.

Erdogan has plunged his country of 83m people into a currency crisis by insisting on four interest rate cuts in the past four months despite rising inflation, bucking the global trend at a time when other central banks across the world are seeking to combat price instability by raising rates.

The Turkish president, who rejects the economic orthodoxy that lifting interest rates helps to tackle inflation, dismissed warnings from the business world of the dangers of his approach.

“Don’t expect anything else from me,” he said in a televised speech on Sunday night. “As a Muslim, I will continue to do whatever the religious decrees require,” he added, in a reference to prohibitions in Islam on usury.

Earlier in the day, he also batted away suggestions that he could be forced to impose capital controls in an attempt to halt the plunge in the currency, describing the idea as “ridiculous”.

The president has said Turkey is pursuing a “new economic model” that will capitalise on low rates and a competitive currency to bolster exports, investments and employment.

Economists warn it will create runaway inflation and dangerous financial instability in a country that is heavily reliant on foreign financing.

The official rate of annual inflation reached 21 per cent in November, and economists expect it to rise further in the months ahead as the weaker lira quickly feeds through into high prices, particularly given Turkey’s significant use of imported energy and raw materials. 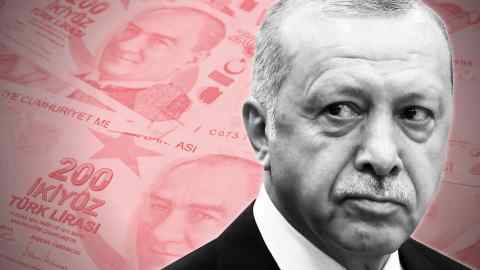 In his remarks on Sunday night, Erdogan acknowledged public concerns over soaring prices but painted the problems as temporary — and cast them as part of a national struggle for economic independence.

“Of course we know that price rises are causing problems in the daily lives of our people. Of course we are aware of the volatility in the exchange rate, the instability in prices and the uncertainty this creates,” he said.

“But we will resist these just as we resisted tutelage, terrorist organisations, putschists and global power barons. I am telling you, there is no going back.”

He attacked Tusiad, the country’s largest business association, which on Saturday urged the government to return to the “established rules of economic science” to restore stability and prevent further damage to business and the public.

“Hey, Tusiad and your offspring,” he said. “I’m telling you, you have one job: investment, production, employment, growth . . . You cannot interfere in what we are doing.”

The previous day, the head of Turkey’s Union of Chambers and Commodity Exchanges (TOBB), which represents small and medium-sized businesses and has in the past been supportive of Erdogan’s approach, warned that the financial turbulence was “worrying and negatively affecting many of our companies”.

Rifat Hisarciklioglu, TOBB’s president, called on the government to take “urgent steps” to stabilise the markets and restore a more predictable environment for business.