Accessibility helpSkip to navigationSkip to contentSkip to footer
Trafigura

Trafigura’s shareholders and top traders to split $1.7bn in payouts

We’ll send you a myFT Daily Digest email rounding up the latest Trafigura news every morning.

Trafigura is handing more than $1.7bn to its top traders and shareholders after its net profit more than doubled from already record levels last year, fuelled by the energy crisis stoked by Russia’s invasion of Ukraine.

The Swiss-based commodities trading company, which is owned by 1,100 shareholders mainly made up of executives and traders at the privately held firm, reported that net profit soared to $7bn in the year ended September 30.

The $1.7bn payout illustrates how trading houses have been among the biggest beneficiaries of an energy crisis that has roiled the world economy and stoked a cost of living crisis in many countries.

Trafigura has long been highly profitable but its earnings have ballooned over the past three years, as energy market volatility has soared. In 2019, the last year before oil and gas markets were hit by the coronavirus pandemic and the following energy crisis, it posted net profit of less than $900mn.

One of the world’s most powerful trading houses, Trafigura moves raw materials around the globe, with assets ranging from mines and ports to energy infrastructure across 150 countries.

Chief executive Jeremy Weir said 2022 had been marked by “unprecedented market volatility” and “big structural shifts” because of the war in Ukraine and Europe’s energy crisis, in which natural gas prices have soared after Russia cut supplies.

The coming year “is likely to be at least as challenging as 2022, with further market turbulence as the war in Ukraine continues and central banks lift interest rates to try and quell inflation”, he said in the annual report.

The group traded lower volumes of oil and petroleum products, but with a higher overall margin of 3.8 per cent compared with 3 per cent the previous year, as it pulled back from business with Russia because of international pressure and sanctions.

Before the war Trafigura was one of the biggest traders of crude and refined products from Rosneft, the state-backed Russian oil champion, a relationship it had spent many years cultivating. 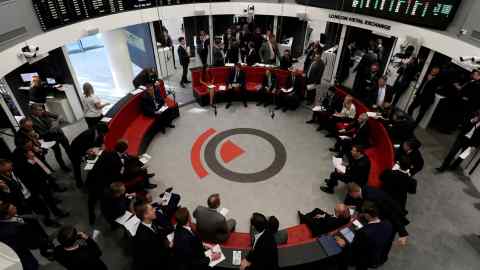 But after the invasion it moved to distance itself rapidly from the company and from Russia more widely, including selling off its stake in a Rosneft-backed Arctic oil project known as Vostok, which it had acquired a little more than 18 months earlier. The sale was made to an obscure Hong Kong trading company called Nord Axis, which had only been incorporated the week before Russia launched a full-scale invasion of Ukraine.

Trafigura said in its annual report that “no loss was recorded at the exit from the investment structure”.

Weir said that in the past year the company’s traders had performed “exceptionally well, adapting quickly to changing trade flows and identifying supply bottlenecks”. He highlighted that crude oil, diesel and liquefied natural gas trading were among the very strong areas of performance.