Lead the way with 50% off
Watches & Jewellery Jewellery

Africa looks to polish its credentials in the value chain

Sign up to myFT Daily Digest to be the first to know about Jewellery news.

Can jewellery rescue Africa’s most fragile economies? The African Development Bank (AfDB) is now trying to find out: it has commissioned consultants to identify where best to target investment in the jewellery value chain — in line with its goal of creating 25m jobs over the next decade, and promoting the economic empowerment of women.

The final stage of this study by Levin Sources — which has been held up by the pandemic — will be carried out in Guinea, Zimbabwe, Sierra Leone and Mozambique. It forms part of the AfDB’s Fashionomics Africa initiative, which aims to raise the profile of African textile, apparel and accessories businesses on regional and international stages.

Africa is the main source of raw materials in fine jewellery — from diamonds to coloured gemstones, gold and silver. Yet most are exported, contributing to the estimated $230bn global jewellery market. Figures for the size of the region’s own jewellery sector, however, are scarce — South Africa’s is estimated at $290m annually — and identifying the scope of the industry is one of the study’s remits.

But, even before the field research has begun, the consultants have identified problems with some of the AfDB’s aspirations for job creation. “Of the three countries we have looked at so far, while Zimbabwe has a wide range of stones — precious, semi-precious and ornamental — Guinea and Sierra Leone produce mainly diamonds,” says Felix Hruschka, an independent consultant to the Levin Sources team, who is leading on technical aspects of the study. “Although there is the political aspiration in these countries to develop a cutting and polishing industry, with no track record in this area, they can forget it.”

This is because the cheaper, smaller diamonds are exported to Asia, where they are cut and polished by very cheap labour, including children, while the better-quality stones are sent to long-established, highly skilled centres in Israel or Amsterdam.

We, the designers, have the desire and the knowhow, and must pick up the baton and drive the industry

“There is just no competitive advantage to be found,” Hruschka says, referring to diamond cutting in Guinea and Sierra Leone*.

But where there is “huge potential for job creation”, he believes, is in the cutting and polishing of coloured gemstones.

First, though, there is a huge hurdle to overcome: Africa’s black market in stones of all kinds. It is a serious problem that, Hruschka estimates, loses the continent’s governments millions of dollars of revenue every year.

However, Hruschka does not believe the widespread smuggling of stones is due to inherent criminality. Instead, it is the result of unreasonable bureaucracy. “The legal, administrative and regulatory frameworks are so demanding that enforcement is impossible,” he says. “Most stones are sold on approval, yet they need multiple permits, stamps and signatures with export duties paid up front. But, if some stones need to be returned, what are the chances of getting the export duties refunded?” 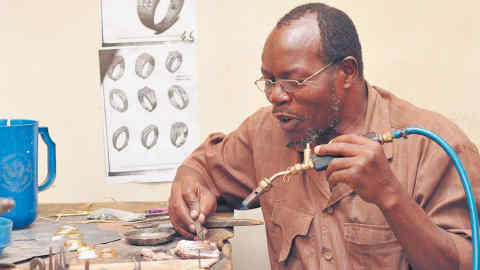 Training centres that teach a broad range of jewellery-making skills are another essential part of building a globally competitive jewellery sector. Hruschka says these would work best as joint projects between neighbouring countries.

Boitshoko Kebakile would welcome this development. Based in Botswana, her House of Divinity business is one of a growing number of contemporary jewellery brands that are establishing a reputation across the region.

Speaking at a webinar in April organised by the AfDB, featuring some of Africa’s most creative jewellers, she said it was “a beautiful time to be an African creative. There is a real sense of unity and pan-Africanism we can leverage. But there are two impediments in the jewellery industry — education and access to finance. I got angel finance for my business, which is very unusual.”

When the Levin Sources report is in, the AfDB will decide how much money should be committed, where to target it and how to balance public and private finance. The bank has already identified microbusinesses as having the biggest growth and job-creation potential.

But Margaux Rusita, founder of the Margaux Wong jewellery brand in Burundi, believes the main impetus for growth and development should come from those in the jewellery industry.

“I’m not one to blame the government,” she says. “We, the designers, have the desire and the knowhow, and must pick up the baton and drive the industry. It is on us.”

Hruschka is upbeat about the prospects for building a viable jewellery sector with global reach, but he says it will take time: “First, countries need to establish a strong local and regional market.” He also believes there is a niche for ethical and responsible jewellery that will create growth towards mainstream jewellery. “If we prepare to fill this niche, it is the best bet for the future,” he says. “Africa has two main fantastic assets: all the minerals and resources for jewellery, and great traditions in design and a talent for art. Both can be unleashed for the good of the African people.”

The AfDB initiative has an important cultural dimension, too. By developing a thriving jewellery sector, it can reset perceptions of the continent. “African luxury is an act of defiance,” says Jeanine Benjamin, a brand strategist based in Johannesburg who has worked for Cartier and Boodles. “It defies stereotypes of our continent. It is a product and vessel to convey our stories, to seduce the consumer and shift negative connotations one piece at a time.”

*This article has been amended since original publication to clarify that Felix Hruschka was referring to a lack of competitive advantage in diamond cutting in Guinea and Sierra Leone, not in Africa generally.

Get alerts on Jewellery when a new story is published