What 1970s design got right — and why it deserves a comeback

As we spend more time at home, the classics of the ’70s are back to show us how to meld cosiness with glamour

Few pieces of furniture are so on-trend as Michel Ducaroy’s Togo sofa. Shaped like a tube of toothpaste folded over on itself and available in a variety of toothsome colours, it’s been popping up all over the place, from chic Instagram feeds to Victoria Beckham’s pre-spring-summer fashion campaign. Rock star Lenny Kravitz says that he has one in each of his homes. Sales have almost doubled over the past year, not just in Europe but also in Australia and China.

You could be forgiven for feeling a twinge of déjà vu. The Togo design is nearly 50 years old; Ducaroy himself died in 2009. This structureless sofa — which is modular and can be reconfigured in a variety of ways — was originally inspired by Pop Art and caused a sensation when it was launched at the Salon des Arts Ménagers in Paris in 1973.

It’s far from the only 1970s furnishing being talked about again. From earth-tone palettes, Murano-glass mushroom lamps and wild houseplants to glamorous velvet, sleek chrome and homely rattan furniture, everything we loved about that decade, and thankfully very little of what horrified us, is suddenly in vogue again. We get to rediscover modular sofas while leaving lurid, headache-inducing wallpapers and carpeted bathrooms firmly where they belong — in the past.

Michel Roset, creative director at Ligne Roset, which has produced the Togo sofa since it launched, suggests that the decade’s experimental aesthetic is part of its contemporary appeal. “People were aspiring to change,” he says. The ’70s were also a period of freedom, even anarchy, he adds. “Fitting in with what’s ‘normal’ is not glamorous — pushing the boundaries is glamorous. And of course that is what we want today.”

Ligne Roset’s excavation of the period began in 2008, with a reissue of Pierre Paulin’s appropriately named Pumpkin armchair and sofa from 1971. With a curving, structural silhouette reminiscent of the eponymous fruit, it was an unexpected hit. It inspired the reissue of another Paulin classic, 1975’s Bonnie, which is plump, playful and designed to warmly cradle the human body.

Other companies are travelling back in time too. Earlier this year, Herman Miller reissued Ray Wilkes’s “Chiclet” — officially known as the Wilkes Modular Sofa Group — 35 years after it was discontinued. Curvaceous in form, the injection-moulded foam cushions are shaped like the chewing gum it was nicknamed after. The collection’s playful but unusual shape helped it acquire a cult life on Pinterest, design blogs and Instagram, which led the company to take notice, says Herman Miller’s lead archivist Amy Auscherman (who happens to own a vintage Chiclet set herself).

When it was originally released in 1976, the Wilkes Modular Sofa Group was intended as a workhorse for work spaces and hotel lobbies, a flexible, light and easy-to-maintain solution. But its bold colours and eye-catching shape also made it a statement piece, says Auscherman. “It looks like a piece of sculpture,” she adds.

That balance between offering thrilling, bold new designs while not sacrificing comfort sums up the spirit of the ’70s. And it goes a long way to explaining why we’ve become so infatuated with it now. As our homes have become the place where we live out every aspect of our lives — from work to play to rest — it’s understandable that we’d want these spaces to become more exciting but also cosy.

“The ’70s was comforting, it was comfortable and it was very human. I think as we are spending so much time at home right now, we are all looking for this in our home spaces,” says Australian designer Sarah Ellison, whose modern yet warm and beachy designs have garnered a loyal following. “We are coming off the back of the Scandinavian minimalism trend so this is the antithesis to that.”

Born in the 1970s, Ellison grew up with a lot of the materials, textures and shapes that have found their way into her most recent collections. A series of brass and rattan tables are freshened up with generous proportions and modern silhouettes; a velvet modular sofa is modernised with cushy, exaggerated curves. The effect is simultaneously relaxed and glamorous.

Social media-friendly shapes may have pushed ’70s design to the front of our consciousness. But it’s the time spent at home over the past 18 months — and how well-suited 1970s’ designs are for the way we live now — that has encouraged a thorough reassessment of what that period has to offer. “There is good and bad to come out of every decade,” says the American designer Jonathan Adler, who admits to being a brass evangelist himself. “It’s all about picking out the good and repurposing it for the present.”

Get alerts on Design when a new story is published 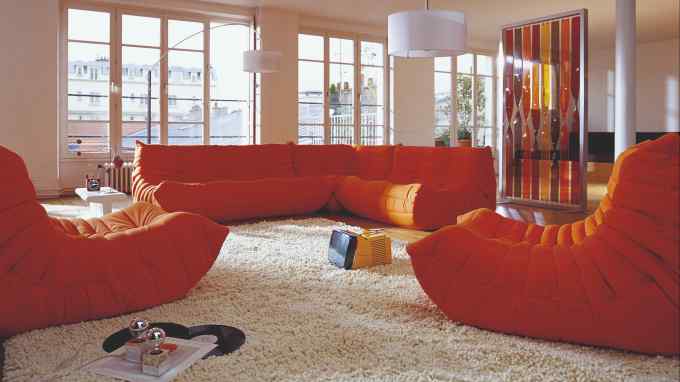