Tefaf works find the calm within the storm

“Natural Phenomena” is the title of Bartha Contemporary’s group show at Tefaf Maastricht (June 24-30), and it reflects a literally rising tide in the numbers of artists across the globe addressing environmental and ecological issues, not least among them climate change. Yet, as this prestigious fair — a cornucopia of fine and applied arts spanning millennia — bears witness, this engagement with the natural world is far from new.

“We wanted to create a context that showed three contemporary artists who each have a very individual take on recording or archiving natural phenomena or occurrences,” explained gallery co-director Niklas von Bartha. “All three have made work that highlights how apparently formal minimalism or abstraction can be rooted in the observation of the natural world.”

The American artist Jill Baroff’s “Tide Drawings”, for instance, use data sets mapping water levels according to date and time; constantly changing water height determining the distance between each line and the scale of the piece itself. She began making them as a way of connecting with a particular place but over the past 20 years, the series has come to reflect how hurricanes and storm surges have increasingly disrupted usual patterns.

“It is counter-intuitive,” the artist says of the quietly serene concentric circles of works such as “Tide Drawing, Hurricane Isaias” (2021, €10,000-€12,000). “They are so calm-looking and open, but this is because the tides have been obliterated by storms.” She chooses to work in ink on translucent Japanese gampi, attracted by the way in which this very fine but strong paper gathers the light.

Fellow American Clay Ketter has long been concerned with time, space and surface, especially those curiously beautiful remnants of the built environment exposed and degraded by demolition or destruction. After Hurricane Katrina hit the American Gulf Coast in 2006, “the kid within me who was interested in extreme weather and ecology got woken up,” he recalled. The catalyst for “Gulf Coast Slabs” (2007) was seeing images of a community of holiday homes razed to their foundations, which resembled his own “Trace Paintings” (1995).

This series of photographic images, priced at €26,000-€32,000, are large Lightjet C-Prints objectively recording top-down the subtly textured surfaces of these modern-day archaeological sites. Here are traces of rooms — tiles, plugholes, fragments of timber — captured at the point at which nature is about to take over, if it were allowed. These were homes built in the knowledge that one day they would be destroyed, and their replacements have already been constructed. When the series was first exhibited, the gallery produced a “self-destructing” catalogue whose pages would soon tear, fail to refold, and eventually fall apart.

The data used by the English artist Susan Morris for a new library and study centre at St John’s College, Oxford, came from the sounds recorded over a 50-minute period in the adjoining walled garden and converted by algorithm into a visual format that evolves across the six panels. The length of time was based on the duration of John Cage’s seminal 1949 “Lecture on Nothing”. Visualisations of apparent silence, these colour-coded lines in their grid of horizontal and vertical divisions register the scale and duration of ambient noise encountered in even the most peaceful urban environments, sounds so familiar that we barely even notice them. Reduced-scale editions of all six, “Silence (Project for a Library) No. 1 to 6”, (2020) are priced at €42,000-€46,000.

Bartha Contemporary’s artists use scientific data, imagery and technology to inform and shape their exploration of natural disasters and phenomena. Nothing is made explicit in these works, nor in the work of London-born artist Emilie Pugh’s cyclone drawings, presented by Michael Goedhuis gallery (£15,000-£55,000). Pugh describes pieces such as “Anthropic System II” (2021) and “Twin Cyclone” (2019) as negotiating an aesthetic route somewhere between “science and the soul”. Her sources are satellite images of super-cyclones, their distinctive spirals symbols of human-induced climate change but at the same time one of the universal geometries of a natural world always in flux.

Drawn to the intangible, invisible and ephemeral, she employs often unconventional materials or techniques as appropriate metaphors for their subjects. Here, six layers of Japanese kozuke paper are stretched, stacked (with space between) and burnt, their perforations lending an ethereal three-dimensionality to works whose scale suggests the power and elemental majesty of nature.

These are minimalist or abstract interpretations of nature. Chinese scholars’ objects are comparable abstractions: certain found natural phenomena were seen as microcosms of the universe. For the Chinese imagination, mountains were manifestations of natural vital energy or qi. Of all the gongshi (stones naturally sculpted by erosion) admired and collected by the Chinese since the early Tang dynasty, arguably most prized are those resembling mountains pierced by caves and grottoes.

Richly allusive, these so-called scholars’ rocks were a connection to nature’s unrivalled transformational powers, and objects of contemplation and inspiration for painter and poet. While smaller stones found their place on the scholar’s desk, large-scale examples, such as those that will be shown by Brussels-based Asian art specialist Gisele Croës gallery (€65,000) were set in gardens.

Gnarled and twisted roots were another inspiration to the Chinese literati. At Galleria Continua, Ai Weiwei’s monumental but seemingly fragile perforated “Iron Root” (2015), the ancient roots cast and rusted, references the tradition, perhaps to invite contemporary viewers to consider the future as Brazilian rainforests continue to burn.

Says von Bartha: “The preoccupation with habitat — the spaces we occupy — that dominated artistic discourse 10-15 years ago has now shifted to a more global view of how the environment is changing around us and what impact it will have.” Art is reminding us that we are part of the same ecosystem. 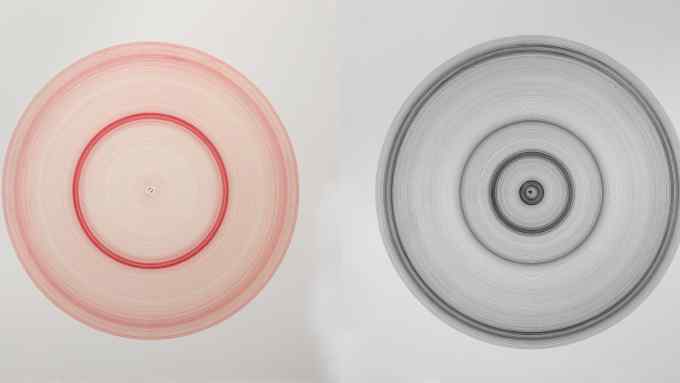