What are stablecoins for — and how stable are they?

The assets are tethered to fiat currencies to limit volatility, yet firmly in regulators’ sights

Stablecoins are a form of cryptocurrency. Unlike bitcoin and other speculative coins, however, stablecoins are nominally pegged to underlying assets in order to limit price fluctuations. This stability has made them the currency of choice for buying other cryptocurrencies.

Stablecoins first emerged around 2014 but their use has grown rapidly since the start of this year. In January, there were about $30bn worth of coins in circulation. By October, this had risen to more than $130bn.

There are dozens of types of coins, of which a handful make up most of the total value: more than $70bn worth had been issued by market leader tether by November; another $34bn was in USD coin, which is jointly run by payment services company Circle and cryptocurrency exchange Coinbase.

Video: What are stablecoins and how do they work?

How are they used?

Customers buy stablecoins from exchanges, and some of their money is, in theory, used to purchase reserves to provide asset backing for the coins. Stablecoins can then be used to buy other cryptocurrencies. Compared with wire transfers of dollars, stablecoins can settle deals far more quickly. That makes them suitable both for acquiring volatile cryptocurrencies and for shifting out of them in case the price falls.

Stablecoins have also found uses in decentralised finance, where they can earn income for customers in a variety of ways, including being lent out to other users or providing liquidity for trading. In the offline world, there are reports of stablecoins being used for cross-border transfers in places where access to dollars is limited.

To which assets are they pegged?

A smaller, though still noteworthy, proportion of these currencies are known as algorithmic stablecoins. They are pegged to other cryptocurrencies, in some cases including stablecoins. Their algorithms are meant to create and destroy coins in order to avoid breaking the peg. The largest of these, dai, has about $6bn worth of coins in circulation.

What are they backed by?

While issuers may say that fiat stablecoins are pegged to dollars, their reserves can be more exotic — the result of laxer regulation than the rules for commercial banks or money-market funds. Without a requirement to provide clarity about what assets they hold, different stablecoin operators have offered varying amounts of detail.

In the case of tether, about half of its more than $70bn holdings are in commercial paper, a form of short-term debt. The issuer and even the country of origin of this paper are unknown, although the portfolio is understood to include at least some international paper. The sheer size of the company’s stated reserves has also raised eyebrows among regulators and others, who worry that it could undermine financial stability. Fitch, the rating agency, has warned that if stablecoins’ holdings of commercial paper had to be sold off rapidly, it could cause contagion in credit markets.

Circle and Coinbase committed to ensuring that USD coin would be fully backed by cash and treasuries (government bonds) by the end of September, which their attestations for the month show. USD coin was fully backed by dollars until March 2020, although Coinbase continued to claim this was the case until this August.

What do the regulators say?

Tether has long been in regulators’ sights. In February, it paid $18.5m to settle with New York attorney-general Letitia Jones, who accused the company and sister exchange Bitfinex of covering up “massive” losses. The investigation said that, for periods of time, the company had no access to bank accounts anywhere in the world, despite its claims that it held one dollar for every tether. Neither company admitted wrongdoing. 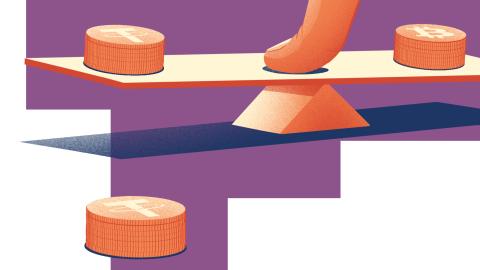 There is now a growing belief among regulators that the whole sector needs to be reined in because of risks around consumer protection, the effectiveness of monetary policy and the stability of the financial system.

In the US, the President’s Working Group on Financial Markets, led by the Treasury, released a report in November which called on Congress to legislate to regulate stablecoins as banks.

In the UK, the Bank of England has warned that stablecoins must face “difficult questions”. The Financial Action Task Force noted last year that the mechanisms for stabilising the assets could present avenues for market manipulation.

A report released in October by the Committee on Payments and Market Infrastructures — part of the Bank for International Settlements — and the International Organization of Securities Commissions proposed bringing stablecoins into line with existing standards for payment systems and clearing houses.

READ MORE#TechFT: How safe are digital assets?
What are central bank digital currencies?