UK consumers need to be protected from dubious crypto investments being promoted online, with vulnerable people at risk of jeopardising their financial futures, the Financial Conduct Authority’s chair has warned.

“It’s difficult for regulators around the world to stand by and watch people, sometimes very vulnerable people, putting their financial futures in jeopardy, based on disinformation and fear of missing out,” Randell said in a speech on Monday.

He mentioned US celebrity Kim Kardashian, who recently encouraged her social media followers to speculate in cryptocurrencies.

Kardashian disclosed that her Instagram post was an advertisement but did not have to disclose that the token she promoted was “created a month before by unknown developers — one of hundreds of such tokens that fill the crypto-exchanges”, he said. “Of course, I can’t say whether this particular token is a scam.”

His comments came as the UK Treasury considers a proposal to give the FCA a larger role in controlling the promotion of crypto assets under tougher standards that at present apply to marketing traditional financial products.

Randell’s speech echoes calls from Gary Gensler, chair of the US Securities and Exchange Commission, for Congress to give his agency more powers to protect investors in “Wild West” cryptocurrency markets that he said were “rife with fraud, scams and abuse”.

Randell singled out influencers, as well as paid online advertising, as key venues for questionable messaging targeting consumers. He said online platforms — including Facebook, Microsoft, Twitter and TikTok — needed to step up their efforts to curtail misleading content.

“Social media influencers are routinely paid by scammers to help them pump and dump new tokens on the back of pure speculation. Some influencers promote coins that turn out simply not to exist at all,” he said. 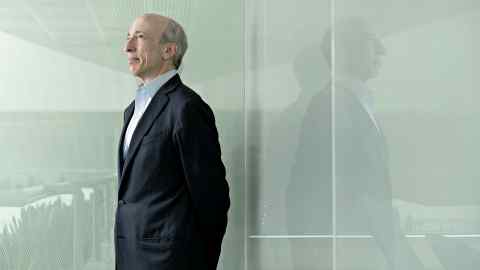 The challenge facing national regulators from offshore crypto players was underscored last month when the FCA said it was “not capable” of properly supervising the international crypto exchange Binance despite the “significant risk” posed by its products.

The FCA said Binance’s UK affiliate had “failed to” respond to some of its basic queries, making it impossible to oversee the sprawling group, which has no fixed headquarters and offers services around the world.

About 2.3m people in the UK own digital assets, according to the FCA’s research. Although the regulator has repeatedly warned that investors in cryptocurrencies should be “prepared to lose all their money”, fewer than one in 10 potential crypto buyers are aware of those warnings. About 12 per cent of crypto owners wrongly believe that they enjoy regulatory protection and potential compensation for losses.

Social media is particularly influential with younger people, who have piled into crypto. More than 80 per cent of 18- to 23-year-old investors said social media had influenced their investment decisions, according to research by F & C Investment Trust.

The FCA chair said he hoped to see a “consistent collaborative effort” among leading regulators to take action against “businesses which choose not to bring themselves within the reach of an effective national regulator”.

“The tide of regulation is turning all over the world, and online platforms should expect a future where regulation addresses the significant risks they pose in the same way as other businesses,” said Randell. “Same risk, same regulation.”