In 1978, visionary British plantswoman Beth Chatto published The Dry Garden, championing plants that could survive arid conditions without watering even during the hottest months of the year. Twelve years later she poured all that expertise into the famous gravel garden at her home and nursery in Elmstead Market in Essex, one of the driest, warmest areas of the UK. She created large curvaceous beds, designed using a length of hose, and filled them with drought-tolerant grasses, euphorbias, spiky eryngiums and sun-loving irises amid verbenas, verbascums and aromatic thyme. Chatto planted well, ensuring young plants had a good start by creating a rain-capturing bowl shape around each one before topping them with gravel, helping to suppress weeds and trap moisture. Her enlightened approach of working with nature without wasting precious resources – along with her mantra of “right plant, right place” – have never felt as relevant and urgent as they do right now.

Last year, the Society of Garden Designers dedicated its autumn conference to the ways in which the horticulture industry – worth an estimated £24bn in the UK and booming post-pandemic – needed collectively and rapidly to evolve in an era of climate crisis by boosting biodiversity, sequestering carbon and conserving precious resources with garden design.

“Maybe too often as a profession we’re seen as ticking off lists for environmental good behaviour when what we should be doing is leading in innovative and educational practices,” says landscape designer Sarah Eberle. First among these for Eberle is a return to the idea of gardening for cohabitation with wildlife – moving away from the view of gardens purely as lifestyle spaces or, as she puts it, “our own mini Versailles”. Practically speaking, that means putting sustainability at the heart of garden design, using local materials and planting that can both be beneficial for wildlife and also cope with a changing climate.

Unsurprisingly, designers and landscape architects working in Mediterranean climates are at the forefront of innovation, having developed planting palettes, techniques and strategies for beautiful gardens that can survive and thrive in the region’s long dry summers. Chief among them are James and Helen Basson’s hugely atmospheric, ecologically informed schemes focused mainly in the south of France where they are based. They take inspiration from the natural planting palette of the region – including juniper, olives, lavender, rosemary, teucrium and cistus – but ramp it up with subtle interventions such as rugged walls and ambling paths that appear as though they’ve been there for centuries.

When the British-born couple relocated to the Alpes-Maritimes just over two decades ago, the naturalistic garden movement was in its infancy. “It was a hugely hard sell initially. We had to fight hard not to put lawns into gardens,” James Basson admits. “Now our clients think it’s brilliant. We create highly diverse gardens that can be messy and complex because nature is complex.”

Madrid-based landscaping and design studio Urquijo-Kastner draws on the aesthetics and vegetation of the local environment in its garden designs. The majority of the plants used by the husband-and-wife duo are shrubs – around 60 per cent in any design and 80 per cent in their own garden. These plants, including black olive, myrtle, Pistacia lentiscus (mastic tree) and Rhamnus alaternus (variegated Italian buckthorn) may not have the immediate seductive qualities of perennials – which provide colour, scent, texture and movement – but create presence and structure in the garden over time.

“Shape or form may not seem to be flashy but in the long run creates something very rewarding,” Miguel Urquijo explains. “This kind of planting contributes year-round, playing with light and shade while framing the garden.” The drawback (and the reason it’s a harder sell with clients) is that most shrubs will take several years to assert a strong visual presence. However, once mature, and with careful pruning, they can create the low-maintenance bones of a garden that will last for very many years.

The idea of moving away from “instant gardens” is key to creating more sustainable spaces that slowly mature over time. Growing from seed or using young plants requires less irrigation and, in the long term, creates more resilient plants. But in a world of instant gratification, this approach requires a leap of faith from garden owners. “That attitude is rare to find,” says landscape designer Luciano Giubbilei. Fortunately, Giubbilei’s clients have included those with patient foresight, and in 2015 he created a four-acre garden set within 24 hectares of organic vineyards in Val d’Orcia in his native Tuscany. “They had waited five years for their first harvest – so they have a different mentality of making something,” he says.

Giubbilei was no stranger to working in drier climes, having previously created a stunning modern parterre of pennisetum grasses with roses beneath an olive grove in Morocco. But his garden in Tuscany marked a fundamental shift in using an entirely new range of plants, many native to the Mediterranean, within a highly sophisticated scheme. The result remains dazzling: serpentine beds are planted with a tapestry of shimmering mounds of helichrysum (everlasting flowers), artemisia (mugworts) and stachys (hedgenettles) with swathes of deep magenta salvias, catmint, phlomis and the sublime bearded iris “Medici Prince” – against a backdrop of almond trees, evergreen oaks and cypresses that segue into the Tuscan landscape.

The need for more resilience – and less reliance on resources – has also prompted designers to experiment on a grand scale on their own patch. Three-and-a-half years ago, Giubbilei bought a base in Son Servera, Mallorca, that was formerly the home and studio of the ceramicist Maria Antonia Carrió. He has transformed this into a serene space with a residency programme fostering a spirit of experimentation that feeds back into his own studio’s creative processes.

Outside what is now known as Potter’s House, on an undulating two-acre field, Giubbilei is developing a horticultural test bed that can fuel ongoing research. Sheltered with mature trees and a snaking stone wall, the epic garden resides entirely in enormous curving beds, which last autumn were planted with more than 40 species. “I love the land and I want to do something that expresses this, but I also want to try new things,” Giubbilei explains. “Here, we can watch what happens, record it and then we will change it again – in three years we will have another set of plants that we can try out.”

Sarah Price is another designer using her own back garden as a testing ground for new ideas. In 2019, at her home in Abergavenny on the edge of the Black Mountains in Monmouthshire, the fine artist turned landscape architect replaced the topsoil in a section of her Victorian walled kitchen garden with recycled sands and gravel, and planted drought-tolerant perennials and grasses. The painterly aesthetic is not dissimilar to the barnstorming garden that Price created at the Chelsea Flower Show in 2018 – a hugely dreamlike space where intense colours bounced against a backdrop of deep terracotta rammed-earth walls.

“A lot of the plants are Mediterranean species and we went for smaller varieties, growing them from seed or planting them without a huge pot of soil to see what grew in sand and rubble,” she says. The tough conditions reduce the need for weeding but also watering, and can be created using recycled materials, making them much more sustainable. “Creating these really beautiful gardens and habitats, seeing what will survive, and thinking about what people will accept – these are little experiments that we could take out into the wider world,” adds Price, whose sensibility leans to a wilder, more natural aesthetic. “I’m here to design gardens and landscapes, not nature reserves – but ultimately I find nature reserves more beautiful.”

Price believes that bad practice is deeply entrenched in the way we build (for example, it’s cheaper to skip leftover materials than to transport them for reuse). But there are startups that now address these issues – among them the East Sussex-based Local Works Studio – that focus on local materials and transform waste into new bricks, tiles and renders. “It’s almost going back to how we built landscapes and gardens in the past using the same techniques, albeit with a bit more science behind them,” Price adds.

But being more sustainable is not just about big design ideas. We can all contribute on the most micro level in our own gardens, where surprisingly (and counterintuitively) all is not as green as one might think. Step into any large commercial garden centre and you’ll be greeted with toxic sprays for every conceivable pest and disease as well as endless trays of plants grown in peat-based compost (many treated with more pesticides, fungicides and fertilisers, and packed and shipped from other countries) in single-use plastic pots. It’s an ecological horror story. Then there’s what happens beyond our gardens. Over the past century, the UK has lost 97 per cent of its rich, flower-filled grasslands. There has also been catastrophic decline in insect life – just as industrial-scale farming has boomed.

At home we can do our bit to counter decline by protecting and boosting wildlife in our gardens, which in turn will contribute positively to the climate. In short, we need to tend them more mindfully – ditching harmful chemicals (biological controls can be just as effective) and learning to live with a wilder space that welcomes wildlife.

All of this is personal but also political – a fact recently highlighted by environmental groups including The Wildlife Trusts, Friends of the Earth and the RHS – as well as garden expert Monty Don – who wrote an open letter to the Environment Secretary, George Eustice, calling on the UK government to ban the use of peat in compost. Why? Because despite targets set out in 2011 to end the sale of peat-based compost to gardeners by 2020, its use has been reduced by negligible amounts – and even less in the professional sector. In the UK in 2019, over two million cubic metres of peat-based compost were sold or used. It is, as Don puts it, “environmental vandalism”, given that peatlands store more carbon than the country’s forests, provide rich wildlife habitats and mitigate against flooding.

Robin Lane Fox
The Tokachi Millennium Forest, a landscape for a thousand years 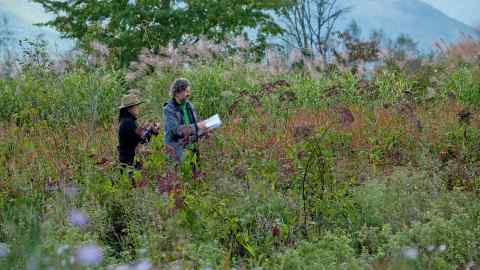 We can shop better too. Smaller growers are leading the way, raising plants without using peat, pesticides and, where possible, ditching plastic. At Kent-based Edibleculture, compost is packed in bags for life, while seeds and liquid feed are sold by weight where possible and local deliveries are made by electric van. The entire business is built on an ethical framework of sustainability – whether that’s reducing waste of natural resources or native wildlife. A similar mindset prevails at Blooming Wild Nursery in south Somerset, where owners Will and Lauren Holley grow using peat-free compost, employ biological pest controls and harvest rainwater for irrigation. They grow wild species (or plants closely related to them) that will be strong, low maintenance and will attract pollinators.

As in most industries, meaningful change lies in where and how we choose to spend our money, and a recent client of Sarah Price in Bristol called for a sustainable garden with the minimum carbon footprint. “It’s the first time I’ve seen that put at the top of the agenda, and it’s exciting to work with someone who is forward-thinking,” she concludes. “There needs to be a fundamental shift in the way we approach design – a reuse and recycle mindset, a new attitude towards resources, thinking local and sustainable. Everyone has to do their bit and it’s time for a collective push.”