Corin Mellor on why ‘the best designs come naturally’

My personal style signifiers are quite simple – I always wear a blue John Smedley V-neck jumper and Levi’s 501 jeans, and I’ve been doing that for the past 30 years. It’s a uniform that tends to suit all situations: you can go out for dinner in your V-neck, and you can be working at the workshop on the lathe. Funnily enough, I’ve started noticing people in my office looking rather similar over the past few years…

The last thing I bought and loved was a 1966 silver Corvette that I imported from LA in 2019. It has such a futuristic shape, and I’ve always fancied owning one.

My style icon is my wife, Helen, who always seems to look immensely stylish. She used to work as an art director at a fashion magazine, so I suppose she has no excuse not to be. I just love the way she mixes things.

The place that means a lot to me is the Peak District, where I’ve lived for about 30 years. It has the most amazing geographical landscape, with gritstone edges that run for miles and miles. The other thing I really like about it is that it’s full of lovely sheep. You take them for granted, these sheep, but they are very much part of the Peak District landscape – sheep, heather and those incredible stones.

And the best souvenir I’ve brought home is a Pop goblet by the Finnish designer Kaj Franck, which I found in a second-hand design shop in Helsinki. It’s part of a series of glasses that were hand-blown in vibrant colours in the ’60s and ’70s, and each one is different. I love that they’re a mix between art, craft and design; there isn’t really one category that you can stick them into.

I’ve had to resort to putting a tent in the garden to keep my boat in, which my wife is hating me for

My favourite room in my house is my studio and office, which is connected to my house with a little bridge. It’s an old stone gasworks building from 1900, about 60ft long, and I’ve filled it with books and bits of design.

The best gift I’ve given recently is a Creality Ender-3 Pro rapid prototyping machine, which prints 3D designs. I bought it for my youngest son for Christmas, but I’ve since found that I’ve completely taken over the machine myself. I now use it almost every day – he keeps telling me he’s going to start charging me for every model I print. $236

And the best gifts I’ve received are the prints by pop artist Allen Jones that my mother used to buy me. I have quite a few hanging in my flat in London; my favourite is probably Split Performance, from Second Thoughts. They’re all fairly big and have these amazing, vibrant colours.

The best book I’ve read in the past year is Richard Batterham: Studio Potter, which was published alongside a new exhibition of his work at the V&A. I don’t really read books, but I do love looking at imagery. Richard Batterham was a potter who supplied all our shops from the ’70s until his death last year. I also own a lot of his work, including an enormous oversized teapot that’s about 18in tall. I think it’s the most beautiful teapot there is.

The last music I downloaded was by X-Ray Spex. I watched what I thought was the most fascinating film called Poly Styrene: I Am a Cliché, about the band’s lead singer. It took me back to my childhood, to when punk rock was emerging. I’ve been listening to the band ever since.

Some of my best ideas have come when I’ve got a tight deadline. I tend to store things up in my head – I’m always looking at buildings, design and images, and I’ll start subconsciously stacking these things up. I can actually turn them into something when I’m down to the wire.

I have a collection of old cars and boats. I’ve got my Corvette Stingray, a 1966 Porsche, a 1957 BMW bubble car, a 1960s boat and two 1960s three-wheelers. I can’t seem to stop buying these design classics – my garage is getting too small and I’ve had to resort to putting a tent in the garden to keep the boat in, which my wife is hating me for. My dream is to get them all working properly.

The works of art that changed everything for me were by Dieter Rams, who did a lot of work for Braun. He’s technically an industrial designer, but his work is so beautiful and pure that I would put him in the artist category. My own designs are quite influenced by his work, and I even have his watch on my hand, so he’s with me all day. There isn’t a design that he has done that isn’t perfection.

In my fridge you’ll always find a huge bar of Toblerone. It reminds me of Switzerland, where we go on holiday every Christmas, and it has a lovely drawing of the Matterhorn on the side. We always stay at Hotel Eiger in Mürren, a car-free mountain village that’s home to the International Inferno Race. There’s also usually a white wine from Renishaw Hall, a winery in the north of England – the wine is so good it’s actually very difficult to get hold of.

The thing I couldn’t do without is my 1970s Bridgeport milling machine, which I’ve known since I was about five years old. It’s the most clever, versatile piece of engineering – you can cut with it, drill holes with it and mill with it – and it’s also a rather beautiful shape. I suppose its form has followed its function.

An indulgence I would never forgo is putting extra-thick double cream on yoghurt, which I know I really shouldn’t do, but surprisingly my cholesterol is fine. I love Longley Farm cream the most because it’s a wonderful yellow colour – it certainly looks like it’s not good for you.

The last item of clothing I added to my wardrobe is a Vétra workwear jacket from The Conran Shop. I love its amazing dark indigo blue – and it does seem to go quite well with my V-neck jumper and jeans.

An object I would never part with is an Ashoka table lamp by Sottsass. It’s a crazy design that mixes all sorts of colours and shapes together – it should be a design disaster, but somehow it works. Mine is an original ’80s model that I bought from a dealer in Stockport, but you can buy them new via Memphis Milano. Memphis really is the punk rock of design, which is probably why I like it. It takes me back to my student days. €2,850, memphis-milano.com

The grooming staple I’m never without is a Mason Pearson hairbrush. It was designed way back in 1885, and they were first to design a brush with a pneumatic cushion. It’s a real British icon.

My favourite building is The Round Building in Hope Valley, where some of our cutlery is made. It was designed by a friend of my father’s, Sir Michael Hopkins, and it’s a brilliant piece of architecture. I think it’s won around 15 awards over its time.

My grooming and wellbeing gurus are nobody. I’m a rather unreformed Sheffield man. Sheffield men don’t go in for grooming and they certainly don’t have a trainer or a masseuse. I don’t think a nutritionist would like my Toblerones – or my cream habit. Disaster!

In another life, I would have been a sailor. I was taught to sail when I was 10 by a friend of my father’s – they built a boat together. I really love boats; the trouble is that I’m stuck in the middle of England with no sea near me.

My favourite website is Vitsœ, a furniture company run by a friend of mine called Mark Adams. The website is just so cleanly done; I can’t fault it. We’ve just redone our own website, so I’ve been looking at lots and lots of different sites. Another one I like is a Californian company called Heath Ceramics, who have a tile factory in Sausalito, just outside of San Francisco. vitsoe.com

HTSIThe HTSI arts special, autumn 2022
Gilbert & George: ‘What do you think we are, middle class?’ 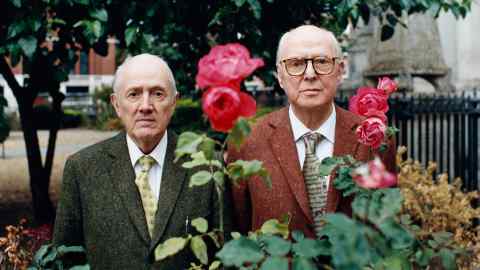 The one artist whose work I would collect if I could is a Cornish artist called John Tunnard, whose work is a mix of surrealism and constructivism. I just love his pieces – the colours, the architecture, the futurism, the shapes. The only thing I don’t like is how much they cost. I’ve only got a print so far.

The best bit of advice I ever received was from my father. He was analysing one of my designs and he said, “Don’t try too hard.” It’s really influenced me. The best designs come naturally; the worst are when people are over-designing things. 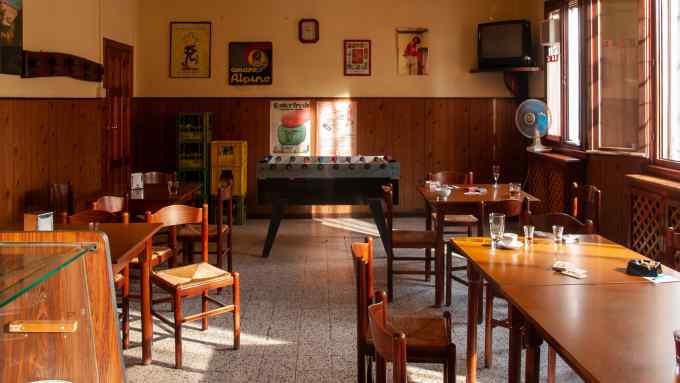