For serene dining in the foothills of Mount Mino, head for chef Atsushi Hirata’s Le Restaurant du Haze, a macrobiotic and vegan restaurant in a traditional Japanese house. The experimental menu combines local produce – garden salads come to life with petals and amazake dressing, wholegrain spelt pastas and vegetable curries zing, then there’s the desserts of the day and organic teas – with Hirata’s takes on ancient fermentation techniques. Book ahead: to cut down on waste, reservations are required. simple-moderne.com Christina Ohly Evans

Housed inside Frankfurt’s narrowest building is this tiny 20-seater and one of three vegan restaurants in Germany to hold a Michelin star. Chef Ricky Saward’s rotating set menu is an extension of his “root-to-leaf” philosophy, with seasonal ingredients such as celeriac, gooseberry and red cabbage plucked from the restaurant’s own permaculture farm in the Taunus mountains just north of the city. Seated in an intimate candlelit dining room overlooking the river Main, you’ll be hard-pressed to find a more magical setting for a herbivorous date in the city. sevenswans.de Sara Semic

From the team behind Mildreds – another one of London’s vegetarian institutions – Mallow cooks up seasonal fare with international inspiration. Served among the steakhouses of Borough Market, chef Sarah Wasserman’s “v’duja” croquettes and pibil tofu tortillas are unlikely favourites of an otherwise meaty crowd. FODMAP-phobics will appreciate the “onion garlic free” menu, a medley of intolerance-friendly noodles, thalis and salads. mallowlondon.com Rosanna Dodds

The city is a vegan hotspot, and Opa has a reputation for simple, contemporary plant-based cuisine. Dishes centre on one ingredient cooked in different forms, so expect takes on fennel (served with fennel seeds and tarragon), jerusalem artichoke (with macadamia, mustard and lemon) and lettuce (with Chinese cabbage, capers and coriander). opatlv.co.il Baya Simons

Set in the grounds of a restored chapel, Analogue celebrates sustainability with an entirely plant-based menu, one that’s designed to start a dialogue about new ingredients, methods and technologies. This is evident in the recycled plastic, 3D-printed bar and tables made from mycelium. Start with a Cactus cocktail – a mix of mezcal, prickly pear and dragon fruit – followed by the festive jackfruit tacos, a local take on Canadian poutine with mushroom miso, chat potatoes and vegan cheese. Perfect for sharing. analogueinitiative.com COE

Don’t be fooled by the name – only vegetables are present in this butcher house. Situated on LA’s Abbot Kinney Boulevard, the restaurant has a daily-changing menu of smoothies, lemon lavender waffles and cashew “ricotta” cauliflower pizzas. The cosy interiors are worthy of a Boho aficionado’s Pinterest board: think macramé wall hangings, natural wood and an expansive patio with plenty of greenery. thebutchersdaughter.com Taanya Garg

This sparse industrial space, tucked in what looks for all the world like a delivery depot behind the Komische opera house, has been serving elevated vegetarian food since 2007. Today – if you can find it – chef Stephan Hentschel serves a Michelin-starred tasting menu of up to seven courses, almost all of which is (or can be) vegan. Highlights include the miso cucumber with seaweed caviar and the black sangohachi aubergine – both are well worth getting lost for. cookiescream.com Alexander Tyndall

As someone with a dairy- and egg-free diet, I am always happy to try vegan restaurants. But finding one that made my gourmet senses jump was a struggle… until Café Gratitude in Venice Beach. The eggplant “parmesan” sandwich was enough to keep me coming back every day during my LA stay, and I wish they’d open up a restaurant in Paris or London – I’d happily become a vegan if they did! Until then I have my copy of Love Is Served by executive chef Seizan Dreux Ellis. cafegratitude.com Isabelle Kountoure

This is one of the longest-running restaurants in the capital (it opened in 1962). The vegetarian haggis is very popular, as are the wholesome soups and stews. But its offering is also experimental – think salt and chilli cauliflower wings and aquafaba marshmallow – with much of it concocted from the muddy sackfuls of local vegetables that arrive each morning. hendersonsrestaurant.com Camilla Bell-Davies

London’s Gauthier, where the menu has been meat-free for just over a year, is set in a Regency townhouse behind Soho’s Old Compton Street, where chef/proprietor Alexis Gauthier marries plant-based ingredients with French fine dining. Dishes change with the seasons, but diners can experience the gamut of the kitchen’s skills via his eight-course tasting menu. A favourite near-fixture is the “faux gras”, a lentil-based terrine without the ethical shortcomings of its duck-liver equivalent. gauthiersoho.co.uk Maxine Kelly

These white-sand islands in the North Malé Atoll might not be the most obvious setting for plant-based dining but that is exactly what you’ll find at Roots, a restaurant inspired by slow food philosophies and the produce from its own garden. Highlights from the menu include the Tempeh Nourish Bowl and a multicourse tasting menu complete with an eggplant, pomegranate and tamarind pani puri amuse bouche and a decadently spiced carrot cake. Don’t miss artist James Turrell’s site-specific Skyspace installation, a further celebration of the surrounding nature. patinahotels.com COE

In a city where juice bars rival coffee shops, the vegan dining revolution is a well-placed phenomenon. At the helm is American chef Matthew Kenney, who first launched Plant Food + Wine in Venice Beach back in 2015. Vegans come for the cacio e pepe noodles and avocado tikka; everyone else is lured in by the expansive terrace (a surprisingly rare feature around these sunny streets). All return for Kenney’s coconut “cream” pie and lime-leaf gelato. plantfoodandwine.com RD

Healthy fare gets a stylish upgrade at Michelin-starred chef Jean-Georges Vongerichten’s ABCV, which offers “high-vibration foods” that promote “plant-based intelligence”. Tucked inside ABC Carpet & Home on East 19th Street, the menu is partially inspired by Vongerichten’s travels around Asia: classic south-Indian dosa is served with yoghurt, avocado and sprouts, while a green chickpea hummus is supercharged with mint and served with wholewheat pita and crudités. jean-georges.com/restaurants/united-states/new-york/abcv TG

Found down one of the cobbled back streets of Tallinn old town, Restoran V is a cosy, wood-panelled spot that serves Baltic soul food with an exquisite twist. Sweet potato is plated with tempeh and mango tahini sauce, while tasty rounds of smoked seitan “shorizo” can be taken away to be enjoyed at home. Founder Mikk Mägi is very accommodating, especially when my mother and I came back three nights in a row for the cashew-cream panna cotta with sea buckthorn sauce. veganrestoran.ee CB-D

A stroll away from Saint Fin Barre’s Cathedral lies Paradiso, a longstanding institution of the Cork dining scene. Irish chef and author Denis Cotter has been putting vegetables front and centre since 1993, with most of his ingredients sourced from nearby Gort-Na-Nain Farm. Recent highlights of the nine-course tasting menu include carolus potatoes with herbs and a smoked tomato crumb, pumpkinseed jalapeno mole and tempura squash flower. paradiso.restaurant TG

In November 2021, Daniel Humm announced the closure of his London restaurant. The reason? A dispute over the chef’s wishes to shift to a strict vegan menu. Almost 3,500 miles away, Humm’s world-famous Eleven Madison Park had already taken the plunge, and if the then 50,000-strong waiting list was anything to go by, he was right in his prediction that “the future is plant-based”. Today reservations are easier to come by, although the food is no less delicious; recent highlights include celtuce dumplings, poached asparagus with anise hyssop and a chamomile ice-cream sandwich. elevenmadisonpark.com RD

Founded by plant-based concept store owner Emma Sawko, Wild & The Moon is a vegan go-to in Dubai. With local, organic and ethically sourced ingredients used wherever possible, Sawko serves seasonal dishes alongside an array of cold-pressed juices. From wild-truffle pizza on coconut crust with cashew and almond to gluten-free orange-blossom pancakes served with homemade coconut whipped cream, this is one of the UAE’s healthiest hotspots. There are also branches in Amsterdam and Paris. wildandthemoon.ae AH

Cheese platters, fresh pasta and alternative arancini – this Western Australian restaurant turns treasured treats into faultless plant-based alternatives. Housed in a ’20s warehouse, Mother makes the majority of its ingredients on site, from the dairy-free “chèvre” to the numerous pickles, sauces and ferments that line the kitchen walls. Exit via Ode, an adjoining homewares emporium focusing on sustainability and recycled waste. motherfremantle.com.au RD

Seminyak revellers now have another reason (not that they needed it) to visit Potato Head: a new vegan dining concept led by chef Dominique Hammond. Initially announced in 2020, the hot-ticket beach club teased Tanaman for more than two years before finally opening in January. This being Bali, the menu sticks to health-conscious small plates such as shio-koji-tenderised watermelon, cold smoked pumpkin and micro-herb salad. An array of Indonesia-inspired cocktails are available if you fancy upping the ante. potatohead.co RD 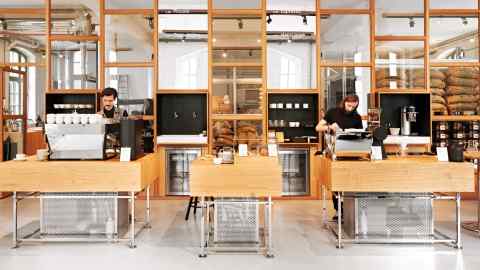 The oldest Michelin-starred vegetarian restaurant in Europe, this elegant institution near the Piazza della Repubblica has been offering an alternative to meaty Milanese fare since 1989. Chef Pietro Leemann is a pioneer of sustainable dining, and each dish – from “Sister Moon” (a Thai-style gazpacho with peas, lemon-peel cream and strawberries) to “Sun Harbour” (a savoury aubergine tatin with plum and ginger) – is an ode to nature. Using only organic and biodynamic produce, all options are prepared without eggs, and most without gluten or dairy. joia.it SS

Don’t be deterred by the omnivore-friendly menu here; Michelin-starred Grön is one of the best restaurants in Helsinki, with most diners opting for the 13-course vegan option. (Last year the city pledged to stop serving meat at official events.) The autumn menu brings a variety of seasonal produce to the fore – pumpkins, chestnuts, cloudberries – but its crowning glory is surely the starter of tomatoes cured in kombu, redcurrant and preserved ramson (a nod to chef Toni Kostian’s fermentation obsession). restaurantgron.com RD

“Vegetarian restaurant” and “slick decor” don’t typically go hand-in-hand, but the two are married beautifully at The Green Spot, with its white plaster arches, oak panelling and tropical garden. Pizzas are the crowd-pleasers here – vegan versions are dusted with cashew cheese, pumpkin sausage and kale pesto – and the jackfruit tacos are as good as any you’ll find in Barcelona. Perfect for date nights. encompaniadelobos.com/the-green-spot Lauren Indvik

READ MOREHow To Spend It Wisely in 2022
HTSI editor’s letter: first, choose your cause 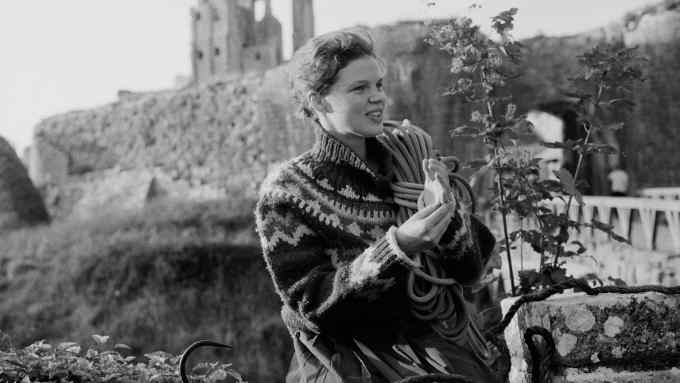