Sixty years since its first launch, a space oddity returns

Seven decades ago, Breitling pushed the start button on one of the greatest chronographs ever to measure elapsed time. Breitling’s Navitimer is one of a handful of designs to survive largely unchanged since the golden era of the wrist-worn sports chronograph. And yet, launched in 1952, the Navitimer did not even begin life as a Breitling.

Instead of Breitling branding, the dials carried the wings of the AOPA (The Aircraft Owners’ and Pilot’s Association), for whom the watch was made as a white-label product. Its black dial crowded with scales and subdials gives the impression of an aircraft instrument condensed to fit on the wrist, which is exactly what it was. In addition to the standard chronograph functionality, it was also a circular slide rule.

“Who other than a pilot would wear a watch that was part calculator, part instrument panel?” must have been the rhetorical question raised at Breitling when the watch was first made. It turned out not to be rhetorical after all. Quite a few people wanted to wear it even if, like me, they neither mastered nor needed the slide rule to calculate rates of ascent, descent and fuel consumption. At 70 years of age, it is still a handsome watch, now available in all sorts of colours.

But do not let the candy-coloured razzamatazz surrounding the septuagenarian’s celebrations obscure the 60th anniversary of a very different Navitimer. “When we introduced the redesigned Navitimer earlier this year, a question on everybody’s lips was, “What about the Cosmonaute?” says Georges Kern, CEO of Breitling.

The Omega Speedmaster may have been the official moon mission timepiece, but all sorts of watches have been worn in space, including a Breitling Navitimer specially adapted to the needs of astronaut Scott Carpenter. Carpenter was an early contestant in the space race, who in 1962 became the second American to orbit the earth (three times in total) and, it is said, the first to eat solid food in space. He was up there for a little short of five hours, which is a little under an hour and 40 minutes per circuit of the earth.

HTSI
Watches that start with the call of the wild 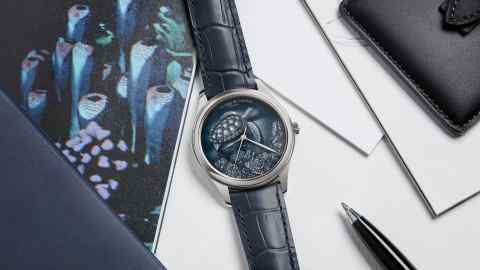 In other words, from his point of view the sun rose and set multiple times. The potential confusion of having three days pass in under five hours – and not knowing whether it was am or pm back at ground control – prompted Carpenter to commission a modified Navitimer with an hour hand that made one circuit of the dial every 24 hours, and the watch that Breitling now launches is a detailed tribute to the 41mm original.

Carpenter splashed down a little off course – perhaps he should have made better use of the slide rule – and after three hours of exposure to seawater his Cosmonaute was damaged beyond effective repair. Happily, today’s orbital space travellers can splash down without fear of water damage (to their watches at least) as the new Cosmonaute is water-resistant to 30m.