Russia’s invasion of Ukraine will reshape the world economy and further drive up inflation by prompting companies to pull back from their global supply chains, BlackRock chief executive Larry Fink has warned.

“The Russian invasion of Ukraine has put an end to the globalisation we have experienced over the last three decades,” Fink wrote in his annual letter to shareholders of BlackRock, which oversees $10tn as the world’s largest asset manager.

While the immediate result had been Russia’s total isolation from capital markets, Fink predicted “companies and governments will also be looking more broadly at their dependencies on other nations. This may lead companies to onshore or nearshore more of their operations, resulting in a faster pull back from some countries.”

“A large-scale reorientation of supply chains will inherently be inflationary,” Fink wrote, in a wide-ranging 10-page letter that also addressed the invasion’s effect on the energy transition and cryptocurrencies, and which updated investors on BlackRock’s business lines and the reopening of its main offices.

The letter did not mention any specific country that would be hurt by the shifts, but Fink wrote that “Mexico, Brazil, the United States, or manufacturing hubs in Southeast Asia could stand to benefit”. Other investors have argued that the last group could substitute for China, where BlackRock last year launched a set of retail investment products.

Fink has advocated for companies in which BlackRock invests to do more to address climate change. His letter predicted that the Russian invasion would affect the transition to cleaner energy.

Initially, the search for alternatives to Russian oil and natural gas “will inevitably slow the world’s progress toward net zero [emissions] in the near term”, he wrote.

“Longer-term, I believe that recent events will actually accelerate the shift toward greener sources of energy” because higher prices for fossil fuels would make a broader range of renewables financially competitive, he wrote.

Though climate activists want investors to shun fossil fuels entirely, Fink rejected this approach, as he did in his January letter to chief executives. “BlackRock remains committed to helping clients navigate the energy transition. This includes continuing to work with hydrocarbon companies,” he wrote. “To ensure the continuity of affordable energy prices during the transition, fossil fuels like natural gas will be important as a transition fuel.”

In one of his first comments on cryptocurrencies, Fink drew attention to the Ukraine war’s “potential impact on accelerating digital currencies . . . A global digital payment system, thoughtfully designed, can enhance the settlement of international transactions while reducing the risk of money laundering and corruption.”

Markets InsightHoward Marks
The pendulum of globalisation is swinging back 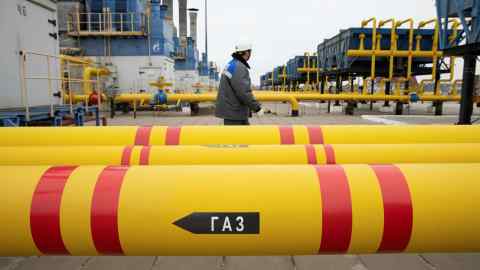 He told investors that owing to increasing client interest, BlackRock was studying digital currencies and the underlying technology.

Fink commiserated with his shareholders over a rocky start for financial markets this year, in which BlackRock shares are down almost 20 per cent. “I share your disappointment in our stock’s performance year-to-date. But we’ve faced challenging markets before. And we’ve always managed to come out better and more prepared on the other side,” he wrote.

He also noted that the company was coming off “the strongest organic growth in its history” in 2021 when buoyant markets and rising interest in alternative assets and exchange traded funds brought $540bn of net inflows.

Looking ahead, Fink made clear that BlackRock wants employees back in the office but will not be among those employers who insist on a complete return to pre-pandemic norms. “Working together, collaborating and developing our people in person is essential for BlackRock’s future,” he wrote. “There are certain conversations that can’t be replicated on a video call . . . We lose the space, the creativity, and the emotional connectivity that come from being together in person.”

“At the same time, we recognize the pandemic has redefined the relationship between employers and employees. To retain and attract best-in-class diverse talent, we need to maintain the flexibility of working from home at least part of the time,” he said.