How To Spend It in... Menorca

FT arts editor Jan Dalley has been visiting the Balearics for more than 30 years. Here’s her cultural guide

Menorca’s multi-layered and dramatic past – from the Talayotic culture of 3,000BC to Franco’s civil-war monstrosities, with multiple invasions including Arab, Byzantine, Roman, British and French along the way – makes for an island rich in military history. The jaunty yachts and cheerful holidaymaking atmosphere have their counterpart in much more sober sights, including the once-mighty La Mola fortress that dominates one side of Mahon harbour and the Isla del Rey’s naval hospital. Such history has generated numerous legends, a few of them dodgy. Chief among these is that Lord Nelson and Emma Hamilton had a loving tryst at “the Golden Farm”, or Sant Antoni, the grandest house – red, arcaded, hilltop – on the harbour. But actually (sorry) they didn’t. Never mind; it is still a delight to visit for a glimpse of 18th-century life.

Mesquida beach is for those of us who like it wild: just sand, sea, hills

Surprisingly, dishes that celebrated historic battles were once fashionable, and the best-known is Napoleon’s chicken Marengo (disturbingly red in colour, don’t think about it). And when the French took Menorca from the British in 1756, their grand victory banquet boasted the new sauce Mahonnese – a whip-up of the olive oil and eggs that were all the Duc de Richelieu’s disgruntled Parisian chefs could find on the impoverished, mosquito-ridden island. Whether or not that story is true, sauce Mahonnese – aka mayonnaise – proved to be a keeper and is now a local delicacy.

As with any holiday destination, restaurants here come and go with speed. One bright newcomer among the dozens along Mahon’s harbour-front, with a dreamy night-time view of the Isla del Rey gently lit up, is Arlette. The place boldly bucks every trend towards veggie-vegan eating; here is a muscly, carnivore menu complete with brains, sweetbreads and more. Yet my vegetarian companion found a delectable dish of leek, soft cheese and hazelnut with a subtle almond base, and the day’s fish was sparkling fresh and light as a feather.

It’s a similar story with hotels, and new on the block in Menorca is Experimental in Alaior (the middle of the island, but still close to the sea), which has the chic design for which Catalans are famed and is garnering great reviews. More established is Alcaufar Vell, in a gorgeous stately house surrounded by gardens, which is the perfect relaxing experience.

More of that R&R can be found on Menorca’s plethora of brilliant beaches, with some to suit all tastes. If your idea of a good one includes sunbeds, umbrellas, music and a bar, don’t go to Mesquida, just 20 minutes from Mahon. Leave it to those of us who like it wild – just sand, sea, hills. 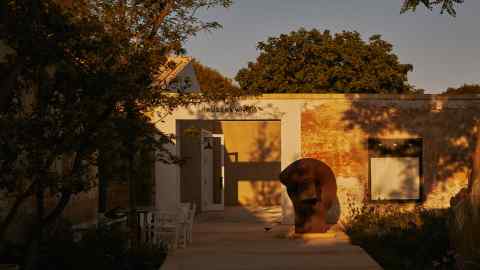 A sensuous beach read that is set on the island – one with challenging dark undertones – is Jo Eames’ novel The Faithless Wife. But millions of fans of Patrick O’Brian’s seafaring novels will also know that Mahon is where Jack Aubrey meets Stephen Maturin in Master and Commander, and it all begins. For a more delicate and firmly landlocked history of the place, Graham Byfield’s detailed watercolours – beautifully reproduced on fine paper – are a vibrant delight in his Menorca Sketchbook.

For cultural immersion away from the page, there’s music everywhere on Menorca, from experimental to traditional. Rock formations and caves are everywhere here too… Join those things together and it makes one of the most extraordinary experiences: concerts in the Líthica quarries, where giant sheer rock walls soaring hundreds of feet high make for an incredible vibe. The Pedra Viva Festival takes place there from July to October.

But if it’s retail therapy you are after, it’s all about shoes. They make them here. Go for it…