As Los Angeles’ grander galleries celebrate the city’s art week, the focus is also on smaller organisations and under-represented communities

When the staff of the Arts for Justice and Healing Network, a small organisation that coordinates arts programming for incarcerated youth across Los Angeles County, learned in June that they had received a $1.5m gift from MacKenzie Scott, former wife of Amazon founder Jeff Bezos, they felt a profound sense of validation.

“Oftentimes you’re in it and you’re like, ‘Are you making an impact? Is anybody noticing what’s happening?’” says Elida Ledesma, AJHN’s executive director. “It is validating for us but, ultimately, also for the young people: it tells them, ‘You matter. This work is important.’”

The network, founded in 2015, brings together a growing group of small LA arts organisations, such as exhibition and education venue the Armory Center for the Arts and ArtworxLA, which pairs teaching artists with students excluded from traditional education, as well as literary and performing-arts bodies.

Many of these organisations have long worked within the juvenile justice system, but their limited resources made it difficult for them to co-ordinate visits or training. AHJN schedules artists’ visits to juvenile probation facilities, arranges artist training, liaises with probation officers and keeps in touch with the formerly incarcerated youth who have passed through their workshops.

It has also begun to help arts organisations in New Mexico and Ohio build similar networks, an effort this infusion of funds could assist. “For an organisation like us, it’s a very significant amount,” says Ledesma. “We are really being intentional about how to spend that money to ensure our sustainability for the long term.”

Since her 2019 divorce, Scott, who was one of Amazon’s first employees and published two novels during her marriage to Bezos, has rapidly become one of the most generous philanthropists in the US, giving away more than $8.5bn. (Her wealth, largely from owning 4 per cent of Amazon, has grown as the company’s market capitalisation surpassed $1.8tn during the global pandemic.) It is rare for a philanthropist to give large, unrestricted donations to grassroots organisations and such gifts can have an outsized impact.

Scott does not have a charitable foundation. Rather, the gifts come directly from her and her new husband, Seattle high school science teacher Dan Jewett, and are accompanied by a blog Scott publishes on Medium. Her June 15 blog, when she announced her $2.7bn gift to nearly 300 organisations, was titled “Seeding by Ceding” and concerned her desire to stay out of the spotlight and “to de-emphasise privileged voices and cede focus to others”. The large scale of the gifts was “a signal of trust and encouragement, to [recipients] and to others”.

She gave a wealth of reasons for choosing arts and cultural institutions as a category, seeing them as “fostering empathy, reflecting community identity, advancing economic mobility, improving academic outcomes, lowering crime rates and improving mental health”. She deliberately went for smaller arts organisations which work with “artists and audiences from culturally rich regions and identity groups that donors often overlook”.

Self Help Graphics & Art received a $1m gift from Scott in June too. The East Los Angeles organisation, founded in 1970 in the garage of printmaker and Franciscan nun Sister Karen Boccalero in collaboration with artists Carlos Bueno, Antonio Ibáñez and Frank Hernández, has long served as a printmaking workshop, shared studio, education space and exhibition venue, championing the work of many Latinx and Chicanx artists. It has also long been under-resourced and has leased three different spaces since moving from Boccalero’s garage in 1972. It finally purchased its current building, a former fish-processing plant on First Street just east of Downtown Los Angeles, in 2018.

“You have an organisation that has a solid community standing or that has been an anchor in the community and has found a way to navigate through being systemically undercapitalised,” says executive director Betty Avila. She points out that the same trajectory is shared by many cultural organisations run by people of colour.

Self Help has supported artists such as Barbara Carrasco, whose virtuosic 1981 mural “LA History: A Mexican Perspective” took an unflinching view of the city’s origins. Artist in residence Pavel Acevedo built intricate mythological narratives about migration in the studio while teaching youth and collaborating with other local artists.

“The organisation has never had the luxury of being in a space that is really built out for its mission,” says Avila, who notes that the quality of Self Help’s physical location has rarely matched the calibre of what its artists offer. “We’re trying to help create the kind of experience the community really deserves.”

But thanks to Scott’s gift and a recent $4m allocation for building renovations in the state budget, the organisation is on its way to having the most stability it has had in its 50-year history.

In Los Angeles, where local arts non-profits continue to struggle with the effects of the pandemic, Scott’s gifts will have long-term effects on the arts and culture sector. For instance, the California Community Foundation (CCF), itself a philanthropic organisation, has already used the $20m from Scott to found the LA Arts Endowment, which will help small and midsized organisations achieve long-term sustainability.

“We have seen the arts ecosystem at perhaps its most challenging time in the middle of Covid,” says Jarrett Barrios, a senior vice-president at the CCF. The CCF recently administered the LA Arts Recovery Fund, a collaborative effort between local donors aimed at aiding smaller arts ventures to weather the pandemic. The Recovery Fund gave between $5,000 and $2m to 90 organisations. “Continuing to contribute to that ecosystem was very important to us,” says Barrios.

Community is already key to both Self Help and AHJN and will remain so after Scott’s donations. A group of artists met frequently to shape the vision for Self Help’s building and AHJN has recently been holding large neighbourhood meetings about renovation plans.

Similarly, AHJN will not make any decisions on how to use its newfound money — such as for the potential acquisition of a physical gathering space — without consulting its larger network, including the young people in its programmes.

Youth leadership manager Julian Harris, who works closely with young people transitioning out of incarceration and helps place them in the paid arts internships that AHJN supports, tries to be transparent about funding, including AHJN’s recent good news. He says he will tell the youth, “Look, this is for you. Help us decide what we can do with it.” 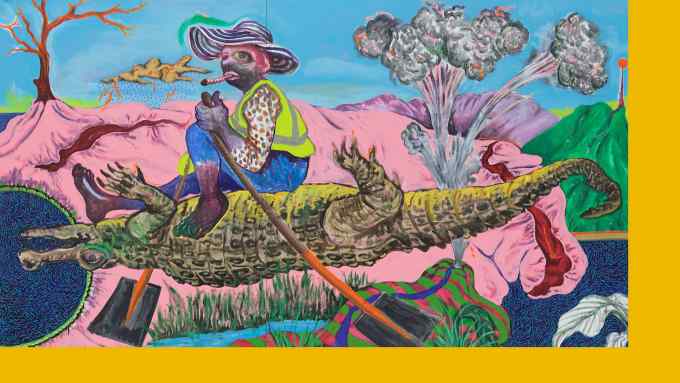