We’ll send you a myFT Daily Digest email rounding up the latest Shopping and gifts news every morning.

“We write with joy” is the tagline for Tokyo-based stationery store Kakimori and its in-house ink shop, Inkstand. The source of that joy – and the thing that sets Kakimori aside from myriad other stationery shops populating Tokyo’s downtown Shitamachi neighbourhood – is its ability to create unique writing tools for each customer. Notebooks can be bound in-house in 20 minutes from a wall of different paper colours and textures. Covers come in leather or fabric, cotton or paper, often born from collaborations with brands such as OLA or designers like Kentaro Tamai. Upstairs at Inkstand, fountain, ballpoint, dip or felt-tip pens can be filled with ink blended from a base range of 17 colours: the number of possible tones is virtually limitless.

Opened over a decade ago by Takuma Hirose, the shop has since built up a following for its bespoke offering and its curation of top-spec Japanese stationery. It taps into a large market for writing accoutrements in Japan, rooted in a long tradition of calligraphy that began around the fourth century. Hirose has observed a recent resurgence of interest in more traditional implements. “Recently, a lot of people have been buying dip pens,” he says. He compares the rise of old-school writing tools to the resurgence of the vinyl record in the face of streaming services such as Spotify.

When making personalised inks, the colour of a cat’s eye is a regular request

The bespoke service at Inkstand was launched in 2014 to meet a demand for more personalised colour choice. “First we had our ordinary colours, but the customers said they wanted to choose between these colours,” he says, gesturing to the four blues in their ready-made ink collection, including a dark indigo and a bright sea blue. Now the choice is almost infinite. Customers are greeted by a wall of objects and their corresponding shades, designed to give tonal inspiration before you enter the mixing room. A bright pink apple sits next to a correspondingly luscious shade of fuchsia. The music for Franz Liszt’s “Liebestraum No 3, Notturno” has been translated into a light pink (“I wanted to show you can make colour from the imagination,” says Hirose). Glass cubes are interpreted as a deep bluey-green. Beside each object sits a handwritten card with the colour recipe – and the vials of the inks used as ingredients in the blend. “We call them colour specimens – colours collected from your surroundings.”

Inside the laboratory, customers are given a glass tube, pen, paper and 17 different inks. They experiment and play with the colours until they’ve mixed their perfect shade. The recipe is then recorded and made up into a full 35ml bottle. Then comes the pen: fountain, ballpoint, dip or felt tip. There is also “Post”, Inkstand’s online iteration: “You describe what kind of colour you want, and then we create two or three colour options, and you can order which one you want.” 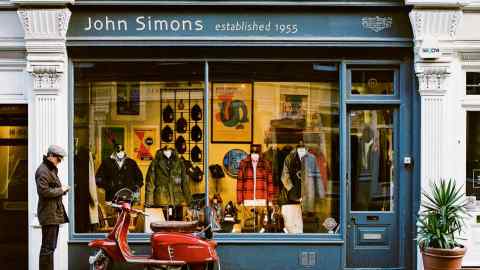 Customers are aged mostly between 20 and 40 – “digital natives who have had technology around them growing up and want to do something physical”. They often come with a colour in mind, and many also “bring pictures of their pets”, smiles Hirose, revealing that the colour of a cat’s eye is a regular request. One particularly memorable order came from a deaf customer who relied on writing for most of his communication, and commissioned a spectrum of blues. “He needed something to represent himself. We each have a different voice; we can also have different handwriting or our own colour to show our personality.”

“We actually made a colour for you,” says Hirose, disappearing and returning with a bottle of pink ink. He dips in a pen and draws a squiggle in a peachy beige. “We made the colour of the Financial Times.”